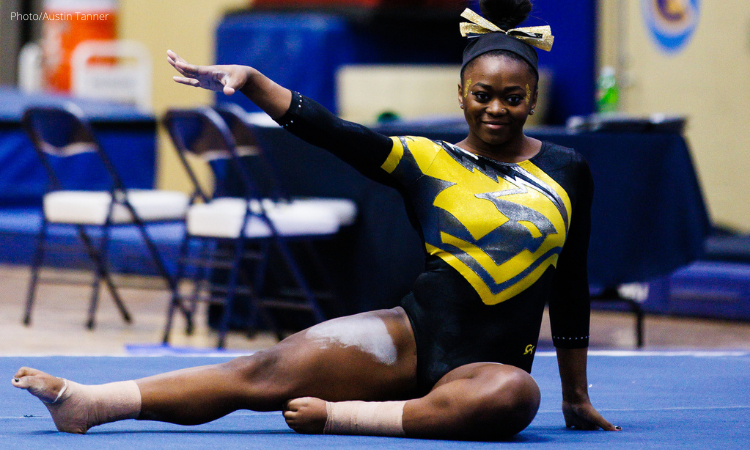 For the top five teams in NCGA, not much changed except for the pressure they’ve all started to put on one another, including Brockport rolling over Division I Cornell. Brockport has started to put some distance between itself and the rest of the competition, leading the field by over a point. Missing from the NCGA meet coverage this weekend was Springfield College. Last seen Sunday Feb. 6, the ESPN coverage was lacking and glossed over nearly all of its routines, including a career-high by MacKenzie MacLeod. Even if the video isn’t always available, we can always bring viewers the latest news in Division III. Stay tuned in as the race within the NCGA continues to heat up.

Much like Angelica Schuyler, the Anchorwomen are never satisfied with their previously broken records. This week they broke the program beam record again, following up last week’s broken beam record, but only after going two weeks in a row with new individual or team program records on floor.

Champagne Shape Queen of the Week

Pike jumps don’t get enough credit for how difficult they truly are, and how much superhero strength it takes to pull off, let alone execute beautifully. Enter Ursinus and Kaylin Knapsack. Pike jumps will never look as good. It’s like trying real Champagne for the first time.

Live Stream Experience of the Week

The highlight of our Thursday night was guessing how the beam routine was going based on purely team reactions while also listening to students getting a tutorial on how live feeds work. Don’t worry. The camera did eventually get moved so both beam and floor were visible simultaneously. It just gave us a good laugh.

The Big Storyline: UW-Oshkosh continued its streak of 190-plus performances in this Thursday night conference matchup. Emily Buffington continued her string of stellar performances, including a sky high double Arabian bar dismount to take the event title. She really has mastered the art of the blind landing. Overall, the beam team led the way this week after posting a season high. The team has officially posted above a 48.000 on every event at some point this season. If the Titans can put it all together, the potential is high. Winona State continued steadily chugging along, posting another score over 180. Beam was still on the up and up while bars proved it is still the Warriors’ weak spot this season.

Implications: UW-Oshkosh will hold onto its first place spot in the WIAC and second spot in the NCGA. However, the team needs to keep its foot on the gas because Whitewater is coming in hot. Winona State’s ranking will also be unchanged this week. The Warriors are slowly but surely inching their team average upward, but bars is still holding back the overall team total.

Implications: UW-Eau Claire will slide back behind Ursinus in the NCGA rankings this week after the Bears posted a second score over 185. The BluGolds are steadily improving, but the rest of the field is picking up the pace even faster. Gustavus’ bars lineup is feeling the effects of losing Annie Corbett. Overall, the team has handled the loss of its key all-around performer with teammates stepping up to fill in the gaps. Sophia Redding continued her streak of bar event victories moving down to the fifth spot in the rankings this week.

The Big Storyline: Iowa and Kent State kept it close while Rutgers put the pressure on—the top three teams finishing with less than five tenths between them. Back to full strength, Ursinus showed its opening meet of nearly 186.000 wasn’t a fluke after hitting over a 185.000, notching a season high on vault and coming close on beam and floor.

Implications: Ursinus should see its ranking improve after making a strong return this meet, wiggling back into nearly the top ten, depending on how the remaining teams perform over the weekend. For Iowa, it should hold strong in its fourth place spot while Rutgers sits in tenth after Friday night in a competitive Big Ten conference. Kent State’s season-high means it should stay safely in second in its own conference.

Records: Madison Zimmerman scored a career-high 9.675 on beam and Alyssa DeLorme scored a person best of 9.500.

The Big Storyline: UW-Stout dominated the competition, taking all of the event victories. Mikala Bugge continued her reign as vault champion while Kiara Brown’s combination of powerful tumbling and fun choreography brought her another title of her own. Hamline posted a season high team total following the best floor rotation of the season. The bar lineup is still finding its way, but the other three events are getting back on track.

Implications: This meet really shouldn’t make any major changes in the team NCGA rankings this week. Mikala Bugge will move up to the sole holder of the fourth spot in the in progress vault rankings while teammate Kiara Brown remains the No. 1 bar performer in the country. Brown’s debut all-around performance is also among the top averages in the nation. The Blue Devils will look to continue to keep the ball rolling in the second half of the season. The team will need to cross the 190 threshold to challenge the top four teams.

The Big Storyline: UW-Whitewater posted its third 190-plus in a row en route to another conference win. The Warhawks have found their consistency in the last few competitions and have not taken their foot off the gas. Welsh, Kollhoff and North proved to play an integral role in the team’s success. Counting multiple mistakes on bars held the Eagles back this week. Staple performers like Olivia Opheim and Emma Grant continued to perform well despite some mistakes on the first two rotations. The Eagles proved that they are capable of bouncing back from adversity.

Implications: UW-Whitewater and UW-La Crosse will remain in the third and fourth spots in the NCGA rankings, respectively. Faith Mylin and Emily North are both among the top 10 all-arounders in the country at the moment as well. If Whitewater continues to perform this way, it will be a top contender for the WIAC and NCGA titles. UW-La Crosse will want to put this bars performance behind it and put together some more complete competitions the rest of the season. Staying above 190 will be the goal going forward to stay among the top teams.

Records: Emily North’s 9.800 on floor marked a new career high and was enough for an event title.

The Big Storyline: Floor was the tricky event of this dual meet. Southern Connecticut dropped just over a full point from last week, but continued to chug through the season finding its groove on every event except for beam, which continues to plague it with inconsistency. Floor did prove to be a challenge for the Owls, a bit of a fluke for them. However, this left room for Rhode Island to claim the highest floor score of the meet, led by Olivia Keyes and Kelsey Gates. The Anchorwomen achieved or tied a season-high on every single event, except for floor. But based on how they’ve been looking, should be a score they’ll easily leave in the dust.

Implications: The Owls will most likely continue to hold tight in seventh place in the GEC, edging closer to topping Cornell and Brown to move up through the rankings. Rhode Island will continue to defend its third-place ranking in the NCGA-East after scoring a new season-high of 184.650. If they continue on the current trajectory, Ithaca could find Rhode Island knocking on its door for second place.

Records: Southern Connecticut set a new program record on vault with a 48.475 and Hannah Stahlbrodt and Hanna Zebdi both scored career highs of 9.775 as well. Rhode Island rewrote history again with a new team beam high of 47.350.

Brockport, Cortland and Ithaca at Cornell

The Big Storyline: Brockport took Tompkins County by storm, toppling Division I Cornell by a margin of nearly a full point, while Ithaca was close on Cornell’s heels. The Golden Eagles notched a new season high, ecplising the previous score by just over a tenth, slowly inching closer to a 193. In addition, Brockport scored a new season high on beam with a team score of 48.600 as well as floor with a 48.525, boosted by Lexi Castellaneta’s 9.900. Fellow NCGA member Ithaca notched a sky high 48.025 on bars, its highest since 1998.

Implications: Within the past four meets, the Big Red has scored between a 191.600 and 191.600, proving its strength is in its consistency. But it’ll still want to increase that score to up its place in the rankings, otherwise it’ll continue to sit tight where it is. Brockport’s upward trajectory means it continues to easily defend its first place rank in both the NCGA and NCGA-East, and Ithaca stays securely in second in the East and in the middle of the pack in the NCGA overall. Cortland’s consistency means its rank will remain unchanged, as well.
Records: Brockport set a new team beam record with a 48.600, and Lexi Castellaneta and Natalie Galioto tied the school beam record with 9.800s. Sydney Schumaker scored a new personal high of 9.800 on vault. Kirsten Paultre set a new career high on floor with a 9.775. Representing the Big Red, Calista Brady scored a career high on floor with a 9.900. As for Cortland, Samantha Nothnagel scored a personal best of 9.750 on beam. Ithaca College broke two program records, on bars with a 48.025 and beam with a 48.300. Skye Cohen set a personal-record in the all around with a 37.900.

For a small fee, international viewers can watch the meet here.

The Big Storyline: Perhaps not as a strong of a performance as last week, Yale still showed up strong with a season high on vault and bars including falling just shy of an all-time bar record, but a few hiccups on beam held the Bulldogs back from their full team score potential. The Owls had a few struggles on floor, plagued by some tumbling short passes, relying on strong scores from Noely Macias and Hanna Zebdi to get the job done. Bridgeport filled out its lineups, including a vault appearance from Kat Doran good enough for a 9.400. Springfield posted the second highest team total on floor today, also its season high, second only to Yale by a margin of just over half a point, with Bridgeport just a tenth behind.

Implications: Springfield will stay in the middle of the NCGA-East pack and the division as a whole. Despite a solid showing, Yale will slid into second in the standings, as well as sliding into fourth in USAG after West Chester stormed its way through the weekend. Southern Connecticut and Bridgeport will see no changes, just yet, for any of their standings. Going forward, West Chester and Yale will be neck and neck for top places.

Records: Hanna Zebdi scored a career-best of 9.750 on floor, for the Owls. For Springfield, MacKenzie MacLeod scored a new career high of 9.775 on floor.