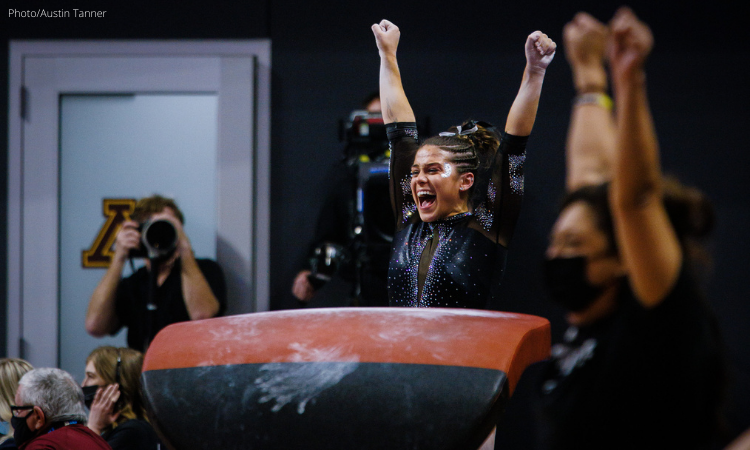 It’s January 8th, 2022 at Carver-Hawkeye Arena in Iowa City, Iowa, as Iowa prepares to take on Eastern Michigan. Linda Zivat stands at the end of the vault runway ready to salute. This would normally be a typical season debut, but Zivat is not a typical gymnast. Despite this being the junior’s first routine of the season, it was also her first collegiate routine ever.

“A few weeks prior to the meet, I was anticipating the first meet and just so ready for it to happen that I had a countdown,” Zivat said. “I wouldn’t even say I was nervous the day of the meet. I was more excited and fired up.”

She performed her Tsuk full with a small hop back and scored a 9.775 before running to her teammates in celebratory fashion.

“ It felt amazing when I saluted the judge after the vault. I am happy that I’m back out there—it’s been two and a half years,” Zivat said. “I’m hungry for more all the time, and I know I can do and achieve more.”

Zivat spent her first two years at Michigan State but did not compete either year due to injuries. This caused the Manhattan, Illinois, native to rethink what she truly wanted for her collegiate career.

“I was just not in a good headspace coming off of an injury and having our season canceled because of COVID,” Zivat said. “There was no bad blood, I just thought I needed a fresh start. I was not becoming the athlete or the person that I wanted to be in those conditions.”

Zivat will be the first to tell you that while she had positive experiences at Michigan State, she ultimately decided it was best to transfer closer to home and start fresh.

“Every little girl dreams of being a college gymnast, and when you have that setback for an entire year, it’s really hard for you to not see yourself on the floor and then know that for the rest of the season,” Zivat said. “[Michigan State] taught me a lot about how to persevere through an injury and how college gymnastics is not so much about the person who’s competing, but how you can support the team itself.”

When searching for a new team, Zivat knew she wanted a team dynamic that felt more like a family, as well as an institution closer to home. Iowa was the perfect fit.

“[Head coach Larissa Libby] values you as a person way more than your gymnastics,” Zivat said. “Twenty girls literally have my back saying things like, ‘I’m gonna cry when you go out there,’ or ‘I am so excited for you.’ That is so nice to hear.”

As for the rest of the season, Zivat is aiming high in terms of competing and being a teammate, and she definitely wants to contribute to winning another Big Ten regular season title.

“I just want to be the most supportive, fun, goofy and amazing teammate as I possibly can be—just constantly bettering myself, not only for myself but for my team because we have big goals.”

Libby sees a bright future for the junior as an individual competitor as well.

“She wants to score a 10.0 on vault because she knows she can, and I think she’ll get that 10.0 at some point,” Libby said. “She wants to put her double layout back in on floor. More than anything, by the end of the year, she wants to have no regrets.”

No matter what the rest of the 2022 season brings, the future is bright for Zivat.

“I love this kid; she is an amazing human being,” Libby said. “She fits in so well … that it’s almost weird to think of it without her there. She is the ultimate teammate. As our seniors are moving on and she remains, I 100% believe she will instantly be the person that helps to keep the team in the right mindset, focused and keep our goals in view.”

Despite all the ups and downs her first two years of college gymnastics brought, Zivat finally found her home in Iowa City.

“Now being here in Iowa, I never want to leave! I am staying here all summer because there is so much to do and there are so many people here,” Zivat said. “It’s definitely an incredible atmosphere, and I want to stay in Iowa forever.”

READ THIS NEXT: Skyla Schulte’s Energy and Experience Pay Off While Living Her Dream at Michigan State