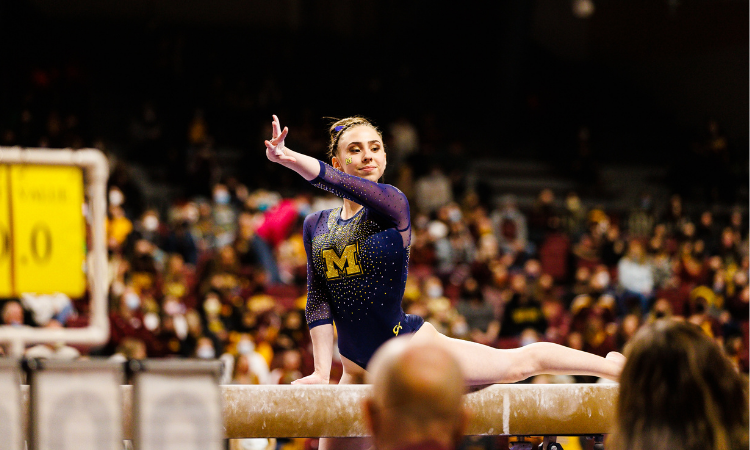 It’s hard to believe, but we’ve already reached the halfway point of the 2022 college gymnastics regular season. Despite the numerous cancellations and postponements, at this point we do have an idea of what each team is capable of this season, as well as who will be the ones chasing championships in just a matter of weeks. Now with a clearer understanding of the contenders, let’s take a look at which second half matchups will help take teams to titles.

Also, most importantly, fingers crossed these meets don’t get canceled.

After LSU’s big win over Auburn, the SEC’s preseason top two are back as the actual top two, meaning the regular season championship is theoretically at stake in this matchup. With the winner staying undefeated and legitimately having a clearer path to the title, as well as national standing and clout as additional stakes, expect full-strength lineups for each team’s biggest meet of the season thus far. Plus, we get an epic all-around battle between Haleigh Bryant, Kiya Johnson, Trinity Thomas, Leanne Wong and a cast of spoilers.

Another pair of conference favorites will also battle for conference supremacy in week six, but this time on the west coast. The Utes enter undefeated after a big win over UCLA last weekend, and the Golden Bears are the biggest remaining threat to spoil the current conference leaders’ run to the title. At home and also boasting an undefeated conference record, California will undoubtedly put up a fight with a realistic shot at a regular season championship on the line in, by far, its biggest challenge of the season so far.

The two days and two collegiate sessions of Elevate the Stage Toledo, featuring every Big Ten team, providing us with a mini-championship in the middle of the regular season. With this meet having legitimate stakes in determining the regular season Big Ten champion, expect all 10 schools to put on their best performances. Expect nation-leading Michigan to take full advantage of competing on a podium.

If Auburn wants to cement itself as an SEC and national title contender, winning this meet would make a gigantic statement. The rightful hype surrounding Olympic champion Sunisa Lee gives the Tigers a new but massive home arena advantage, and they will need to capitalize on it to beat perennial-favorite Florida, likely with a shot at an undefeated conference regular season.

Barring any crazy, unforeseen circumstances (honestly, a tough task this season), there should be a lot on the line in the Pac-12 regular season finale for both of these programs. The Golden Bears will most likely be in position to secure a second-straight top two conference finish and could even be able to clinch a crown if they pulled an upset over Utah. The Bruins, who stumbled through big opportunities early in the season, will have one last shot at a statement win to build momentum for the postseason.

The Sooners begin an incredibly tough two-week stretch of non-conference meets on the road in SEC country against future conference foe Florida. With both teams leading their conferences and both in the thick of championship conversations, this dual will be important in shaping our team final picture. The freshmen in this dual will also be incredible, with an intriguing all-around battle for top rookie between the Sooners’ Jordan Bowers and the Gators’ Wong and Sloane Blakely.

In a potential No. 1 vs. No. 2 matchup, Oklahoma’s very next meet will continue to shape the national championship landscape, this time at home against nation-leading Michigan. The huge scores could start flying right away in this one, with a combined eight vaulters between these two squads having received at least a 10.0 from one judge on a vault this season. Similar to the Sooners, this begins a challenging two-meet streak of non-conference opponents for the Wolverines in their final away meet before the postseason begins.

After a dominating home win over UCLA to open its season, Minnesota will get a second shot at knocking-off a Pac-12 powerhouse in its road finale. Although the meet will be in Utah, two Minnesota born gymnasts will duel in the all-around with the Golden Gophers boasting three-time Big Ten gymnast of the year Lexy Ramler and the Utes bringing Olympic silver medalist Grace McCallum to the table. An upset could alter the team final landscape as well, with Utah currently projected in and Minnesota sitting just outside.

Utah hits the road the next weekend for its own challenging final road meet, facing LSU in one of the few arenas that actually matches the intensity the Utes’ home crowd brings. As if a late season meet with postseason seeding at stake isn’t enough, one of the Utes’ assistant coaches was an All-American for LSU (Myia Hambrick) while two of the Tigers’ assistant coaches are in their first year with the program after leaving Utah (Garrett Griffeth and Courtney McCool Griffeth). The winner of this showdown will pick up some great momentum just a week before the conference championships.

The sport’s hottest and most improved team, led by an Olympic gold medalist, versus the defending national champion who has yet to relinquish the top ranking this year. What more needs to be said?

READ THIS NEXT: It Takes a Village—and a Lot of Heart—to Put on a Meet in the PMAC