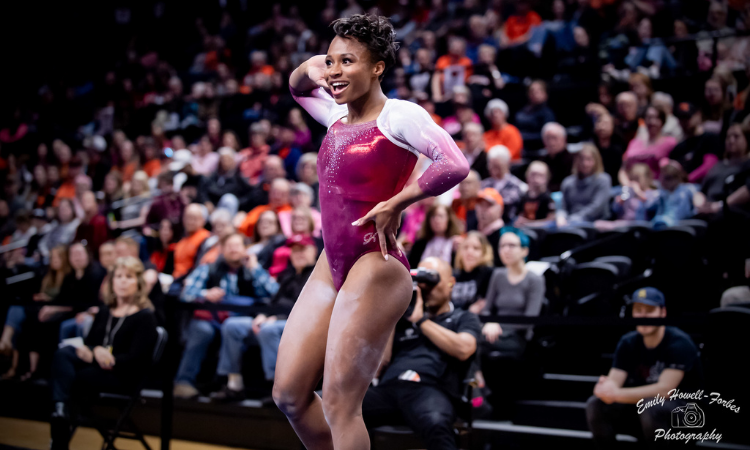 By this point we’ve heard from the majority of 2021 seniors about whether they intend to come back for their “COVID year” or not. So we thought it would be a great time to discuss that very topic in this week’s roundtable.

Agree or disagree with our answers? Let us know in the comments or on social media!

Which senior taking a COVID year are you most excited to see in 2022?

Elizabeth: I was gutted when Lynnzee Brown’s nationals ended with a fall on vault when she was in line to win the all around, so I’m so glad she’s coming back for her revenge tour in 2022.

Emily M: I’m thrilled that Lauren Bridgens is coming back! She’s such a force for Penn State, and ending her career on an Achilles injury was just too much. I’m also over the moon that we get one more year of Clair Kaji.

Carolyn: Definitely Emily Muhlenhaupt for Boise State. It is really going to benefit from her high scores and consistency once again. I WANT TO SEE THAT 10!

Tavia: I’m looking forward to another year of Clair Kaji’s beautiful Pak salto. I’m also excited to see Lynzee Brown compete in her fifth season for Denver. I’m going to get my 10 tally board ready in advance.

Katie W: There are so many I’m thrilled about, but I’m really excited to see Sarah Edwards take a fifth year for LSU. She is an absolute joy to watch, and I’ve been to drawn to her since her debut as a walk-on.

How about an underrated performer that you want to see break out and dominate during their fifth year?

Elizabeth: I second Tavia with Kyla Bryant. She’s always been good, but I think she has the potential to be GREAT, and losing basically a whole season last year was heartbreaking. I’m so excited she’s returning for one more go.

Emily M: I’d love to see Izzy Fox really shine for Illinois State. She was a strong performer there after transferring from Alaska, but it’d be fun to see her get a little more gymternet fame in her last year.

Tavia: There are so many gymnasts in this group that don’t get enough love. Kendal Poston from UCLA, Kyla Bryant from Stanford and Karrie Thomas from Oklahoma are just a few that I want to see thrive and get all the recognition they deserve.

Katie W: Nicole Webb has so much potential for N.C. State, and her junior season was plagued by injury. I think she started to find her confidence in 2021, and I hope it carries over to this upcoming season. Her beam and floor in particular are stunning to watch when she hits.

Are there any gymnasts you think will add more events during this swan song?

Elizabeth: I was surprised when Pauline Tratz said she’d be returning for a fifth year, but I’m so excited we get one more season of her floor choreography. She was training all around last season for a bit too, but it never came to be in actual competition. Maybe 2022 is the year?

Emily M: I have to wonder if Nebraska’s Anika Dujakovich will need to add an event, given the size of that roster. I could also see Karrie Thomas at least attempting to break back into the floor lineup at Oklahoma, too.

Carolyn: I hope OU puts Karrie Thomas and Carly Woodard back into the floor lineup more consistently, especially after Anastasia Webb left a huge hole in every lineup.

Tavia: Kynsee Roby from Nebraska has competed all four events at some point in her career. Last season she was a mainstay on bars and beam. She’s already been seen training vault this offseason. I also would love to see Sydney Soloski add events!

Katie W: Not sure if this is truly what the question is going for, but I would love to see a healthy Mia Sundstrom in her fifth year. She was not able to contribute much in her junior and senior seasons due to injury. However, she was in the all around for much of her freshman year. I would love to see her end her career on a high note with Denver having another record-breaking season.

Elizabeth: I’m not ready for Trinity Thomas to be done (ever), so that would be just fantastic if she decided to use her COVID year in 2023.

Carolyn: Not sure if this counts, but if Andrea Maldonado could somehow get four years of eligibility, that would be a dream come true.

Tavia: Olivia Trautman! She’s had some injury struggles since her freshman season, but she came back with a vengeance at the end of 2021. Who wouldn’t love an extra year of her 10-quality vault and floor work?

Katie W: There’s just so many… But I think I’ll have to echo Elizabeth with Trinity Thomas. Her gymnastics is out of this world.

And finally, Which team do you think will benefit most from having COVID year seniors back for one more go?

Elizabeth: At least three people below me said this, but I have to agree with Minnesota. I was a little bit worried for the Gophers and the potential for a pretty big dip, but with Ramler and Loper returning, they at least have one more season to plan for life without their superstars.

Emily M: Minnesota and Maryland. The Gophers were cruising for a big dropoff in lineup experience, and Lexy Ramler, Ona Loper and Hannah Willmarth all coming back will stave that off for another year. Maryland will also be really bolstered by one more year of Audrey Barber’s all around steadiness. The Terps have a lot of young talent, but her experience will be important.

Carolyn: Denver and Minnesota. Denver is bringing back its whole senior class, which will strengthen the leadership and experience of the team for the better while Minnesota gets its two stars Lexy Ramler and Ona Loper back, so I would imagine we see these reigning conference champions dominate in the postseason once again.

Tavia: Minnesota and California will really benefit from having extra returners. Minnesota has the momentum of a Big Ten championship under its belt, and I’d expect the return of Lexy Ramler, Ona Loper and Hannah Willmarth to allow for the continued success of the program next season. California gets to keep Kyana George, Nina Schank and Emi Waterson for the 2022 season. They have been the backbone of that program over the last four years. California will continue to rise up the rankings with the help of these returners.

Katie W: For me it’s definitely Minnesota and Denver. Minnesota with Ona Loper and Lexy Ramler makes it a much better candidate to reach nationals for a second year. The team would have lost almost its entire beam lineup and its top two scores on every event if they were to graduate. Denver’s rising sophomore class is incredible, and with all three seniors staying for a fifth year I wouldn’t leave it out of the conversation either.

READ THIS NEXT: CGN Roundtable: Olympians and the NCAA