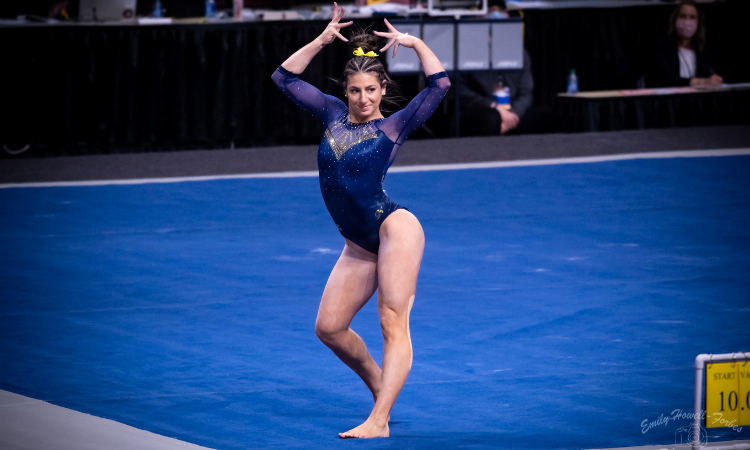 We’re here! We made it! It’s nationals! Did you think we’d get here in the darkest days of last winter? I had moments where I truly did not, but man am I thankful and grateful for all the sacrifices folks made to keep this season rolling.

I hope you’re ready to enjoy some intense competition on this glorious Friday afternoon. Both semis are stacked, and this nationals, as Jay Clark pointed out in the NCAA pre-nationals press, may be the closest one ever, but I chose this particular session to blog for a reason. I think this gal is the real nail biter. Michigan surged ahead of Florida with its post-regionals NQS (calculated by adding the regional final score to the previous NQS) on the heels of a program-record tying 198.100. But you know and I know that the Gators are no schlubs. We have two unknowns for Florida: Trinity Thomas’ health and who will be in the floor lineup post-Sydney Johnson-Scharpf Achilles tear. If I had to guess, I’d say we see Thomas on bars and one other event (beam or vault?) with her return to the all around reserved for the finals should Florida advance. But that’s truly just a guess.

While Michigan and Florida are definitely favorites, neither of California or Minnesota is here just for giggles. Either could advance with just a slightly-better-than-normal day, and we can be sure that both the Golden Bears and Golden Gophers have the national finals on their hotel conference room vision boards in their pre-meet team meetings. Michigan has had sloppy events, especially on beam and floor, at various times throughout the year, and Florida has shown cracks from time to time. Neither is invincible, and this field is just too good to make mistakes and sail through.

There’s a crucial event for each team. Minnesota needs to stick vaults. It is brilliant on beam often and floor usually, but it can set itself apart from California and stay competitive with the top two with its three end-of-lineup Yurchenko 1.5s if all five counting landings are spot on. Vault is big for Michigan, too. It started hitting 198s when it started throwing six 10.0s. A big vault number will do a lot to help the Wolverines surge ahead. Florida will be focusing on bars, an event where it can be excellent, but it has also had one big miss and a few “ehh” performances this year. Ehh won’t cut it in this stacked session. Handstands, landings, details—think everything that makes Kathy Johnson-Clarke happy—are critical today. California is in a similar position on beam, an event that is often great but can be just a bit off. If the Bears are going to get the upset, beam needs to be clean and steady. That plus California’s usual floor and bars will put it in a good position, needing just to minimize vault deductions to close out a great meet.

PHEW OK! On to the gymnastics!

We’re a half hour out and I’m here early with some in-arena updates from folks in Fort Worth! Abby Brenner, who has been out since Big Fives with an ankle injury, warmed up bars, and Trinity Thomas warmed up all four, including her double layout on floor.

Something slightly weird happened with Cal’s warmups. They left the floor with time left, changed into competition leos and then returned. The arena announced they had 18 minutes to warm up all four. Seems that once they were back things were going just fine, despite the alarmism on Twitter.

Just endless waits for everyone on every event oy ve.

Hooten (Minn): Y1.5, VERY crooked on the table, but pulled it around and stuck. She’ll get a directional deduction I think.

Farley (UM): Solid triple series, she’s a machine on that. Check on her leaps, maybe shy on one split. Side aerial to split, better shape there. Gainer pike stuck.

Gallentine (UF): Floaty Maloney pak combo, ah she got tripped up on the low bar, it was weird, but she fell on her pirouette. DLO to her knees. Ah, that’s rough, but everyone else was through cleanly.

Heiskell (UM): Cat to side aerial, she was a little off but covered very well. Great splits on leaps, step back on her bhs loso landing. RO 3/2 stuck? I think.

McCrary (Miz): Oops, problem with her music! That’s extra rough when you’re here as an individual. She stepped off the floor while they sort it out. Front lay to rudi OOOH holds the stick! Love that to open. Double pike, deep knees and she hops a little. Switch side Popa was a little weird in her upper body but splits were strong.

Phew as suspected this one is close after one! Minnesota did its job on vault to stay in it early. Florida on the other hand had an eh bars day, just like I was a little worried about. Hopefully that’s out of the Gators’ systems. Overall, this has been really clean and a pleasure so far.

Sadighi (Cal): FTY, knees and a hop back.

Wojcik (UM): Good double pike, had time to really open and see the floor. Clean leaps. Stuck combo pass, that’s where she has problems sometimes. FHS rudi to split, good. Wow, great set for her after a few rocky ones this year!

Scharf (ASU): Front through double tuck, good. FHs front 1/1 front tuck, landed on her heels a bit and lunged back. Clean leaps. Double pike, deep knees but covers by hopping into her lunge.

Mmmm, the Gophers lost some ground there. Landings were a little steppy. Florida came back, especially bolstered by Clapper’s clutch anchor set and Thomas’ return. Michigan is decidedly in the drivers’ seat, but Cal has it’s best event next.

Desouza (Cal): Big hop on her dismount, I missed the first half, sorry!

Koch (Minn): Fall on her bhs Loso. Check on leaps. Another bobble on a front aerial to scale. Hop on dismount.

Skaggs (UF): Wolf turn was good. Little low on her opening combo pass.  Low on her closing pass too.

Montgomery (Minn): Pressure’s on now. Big test for her only event of the day. Clean so far through series and leaps. Arm swing and salute to cover a big step on dismount.

Loper (Minn): Great bhs loso. Front toss to beat, clean. Switch to straddle 1/4, short of 180 on the latter. Hop on the dismount.

Thomas (UF): DLO, bounced up a good bit on the landing. Clean leaps. FHS front 1/1 front lay, no issues there.

Korlin-Downs (Minn): Bhs loso, solid. Beat to split to double stag, no problems. She has such great lines. Side aerial 1/1 stuck. Wow. She has gone 10 before…

Watterson (Cal): Pak, caught close and I think bend her arms. Can’t get the rhythm back and she falls. Van Leeuwen, good Hop on dismount.

Ramler (Minn): Clean bhs loso. Front aerial to beat was good, if she was going to have an issue that would’ve been it. Beat to ring jump, little check. Hop on the dismount.

Brown (DU): DLO HUGE holds the stick, just a little low chest there. Switch 1/2 wolf 1/1, dropped her chest a little in the wolf. Clean combo pass, maybe a little low on her last front lay. Double pike, slid her front foot a bit. What a fun routine to close the rotation on!

The Gophers really gave away ground there. Florida was good but not extraordinary on floor with some bouncy landings, but was tidy enough to avoid a Cal comeback. The Bears will be upset not to have gotten the stratospheric score on bars they’re capable of. Michigan also lost a little ground to Florida, but remains comfortably in first.

It has come to my attention that there is Floor Score Discourse on Twitter. Scores are high on floor. They’ve been high for everyone. Shrug.

George (Cal): Frone aerial back tuck, really imprecise position in the tuck, just sloppy; they could take for the shaping. Beat to stag, completely solid. Gainer 1/1 stuck? Maybe moved one foot a smidge.

With Watterson’s score in Florida knows it will advance, lots of screaming. Michigan holding off on celebrating. Oooop, okay there we go, they figured it out.

Schaffer (Miz): We’re missing this to watch Cal watch her. Booo. I can hear the beam.

Michigan and Florida advance! That was probably closer than the Gators would’ve liked, but they managed to hold off Cal at the end and get another shot at fixing some funky issues tomorrow. Bouncy landings and continued issues for Payton Richards are the pain points. Michigan will want to tidy up vault and bars landings before the final.

What stellar seasons for Minnesota and California. Really a pleasure to watch all year.

Remember to stay tuned after semifinal two when we’ll determine individual national champions on each event and in the all around, as well as All-Americans. 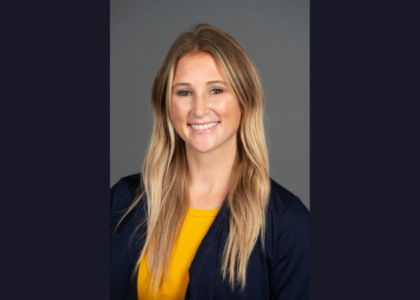