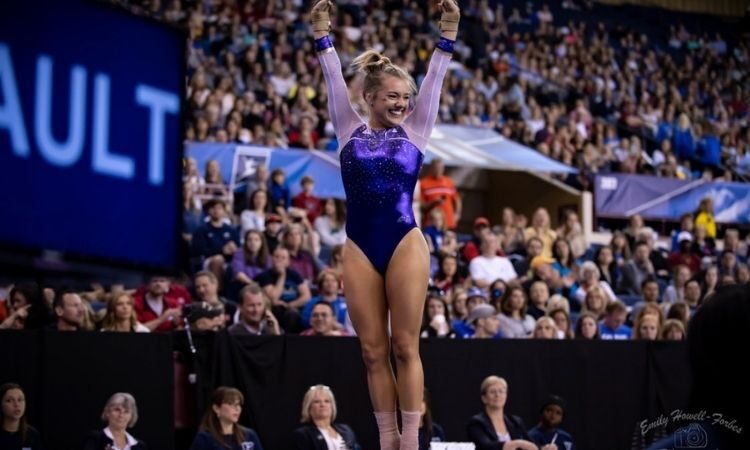 Semifinals Session Two is about to get underway and any of these four teams could claim the meet and advance to tomorrow’s final team championship session.

Utah has been the most consistent over the course of the season but has not reached the season high scores of the other three programs. The team did have a season-best at the regional final and will look to keep up the momentum.

The Sooners and The Crimson Tide have excelled in the second half of the season but are facing some last minute injuries that will result in lineup adjustments. Oklahoma will likely be without senior Karrie Thomas after she sprained her ankle on her beam dismount at regionals. Meanwhile, Alabama will potentially be without Mati Waligora and Lexi Graber, the latter of which only competed one vault at regionals. Graber provides key routines for Alabama especially on vault and floor.

LSU has been up and down all year and had a rocky performance in Salt Lake City.  The Tigers were able to advance out of regionals but cannot afford to make the same mistakes. Haleigh Bryant had issues on floor in two consecutive competitions and was taken out of the beam lineup on day two. LSU will need to come out strong for a chance at not just winning the title but making the final altogether.

Semifinal one was nothing less than exciting, but semifinal two just may be able to exceed it. This competition should come down to the final routines. So, hopefully you’ve de-stressed from the first semifinal of the day.

Interesting tidbit from the ESPN Broadcast: Utah is the only team to qualify for all 39 national championships.

Gaskins (Alabama): FTY, hop back on the landing.

Olsen (Alabama): DTY: soft knees and a slight pike down. Shuffle back on landing.

Quinn (Alabama): Y1.5, crooked on the landing and takes a hop sideways. Large bend of the knees.

Webb (OU): Short on first handstand, nice Pak Salto, gorgeous Maloney half, short on final handstand into a stuck blind half to double front half.

Blanco (Alabama): Y 1.5, under rotates it and has to take a step back.

Dennis (UCLA): DTY, under rotates it and has to take a hop forward. Some form issues in the air.

Davis (OU): Coming after a fall from Ragan Smith. gorgeous first handstand, Blind half to piked jaeger, nicely done, stunning handstands, pak salto, she is on with these gorgeous straight over the bar handstands, double front dismount, step forward.

O’Keefe (Utah): Side aerial to loso, stunning, switch leap to split leap, well done, controlled full turn, cat leap to side aerial layout full, may have stepped out of it too early for the stick.

LSU was lights out on floor and the team will be headed to its other strong apparatus with vault. Oklahoma had a great bar rotation to put them in second after the first rotation. Alabama is ahead of Utah, but the team missed some key landings that could hurt them later on in the competition. Vault is one of its stronger events when Alabama executes the 10.0000 SV to its ability. However, The Crimson Tide struggled on the apparatus during regionals and were able to make up some ground on bars. Alabama will need a repeat performance here.  Utah may be trailing in fourth place, but the Red Rocks are done with Beam. It’s  anyone’s game and a tight knit competition heading into rotation two.

Chae Campbell inured her knee during vault warmups. She landed with a completely locked knee, but did walk-off the event.

Johnson (LSU): DTY, she looked off on the table, but pulls it around and gets nice amplitude with a stick.

Adams (Alabama): Maloney to Pak Salto, Van Leeuwen, fabulous,  Toe Full to double back, close to bar and takes a large step back on landing.

Bryant (LSU): Her usual fantastic Front Pike Half, sticks it. Maybe your vault champion.. 9.975.. I don’t think anyone else will top that one. Very well deserved.

Shepherd (NCSU): very nice double pike to start. Lacks some flexibility in her Switch full to switch half leap combo. Front lay to front full, pikes it down but covers well, double tuck, lands with her chest low.

Well LSU is having themselves a competition so far. The team maximized its key events and put themselves in the lead against the other competition. The Tigers will need to keep up its execution on its weaker two, but LSU has set themselves up for success. Freshman Sensation Haleigh Bryant is in a really great position to become the VT national champion as well. Oklahoma had a solid set on beam and Jenna Dunn provided a key routine in the absence of Karrie Thomas. Utah made up some strong ground with one of its better floor rotations led by Soloski and O’Keefe. Vault is a huge question mark for the Utes and will be a key determining factor in its chances of advancing. Alabama made up ground in the later half of the rotation on bars, but has fallen over four tenths back from the leader.

Hall (Utah): Y1.5, great landing.. couldn’t quite see whether it was stuck because coach was in the way.

Schoepfer (OU): Huge Double Tuck,  Back 1.5 to front lay, Ring Leap, under rotates the Double Pike but covers it really well with a small shuffle. One of her bets routines.

Rucker (Utah): Y1.5, nice amplitude off the table, but has to take a step back on the landing.

Burch (Utah): Y1.5, somehow gets it around after missing her usual block. Takes a hop back on the landing.

Durante (LSU): Gorgeous handstand to start Blind change to piked jaeger, great, aggressive on Pak Salto and she’s off, she looks to be injured but gets back onto the event. Attacks the final handstand nicely and sticks the landing.

Graber (Alabama): Falls off the beam, cat leap to front toss to one foot to gainer full, finishes strong.

Joyner (Rutgers):good full turn to start, Bhs loso, off the beam, Switch to split half, nicely done. Missed the dismount.

Hambrick (Ark) Double Tuck, nicely done, Rudi back layout stag jump, such a well controlled clean combo pass, Switch half popa, Double Pike, on the larger side for a step back. She is having a fantastic all-around competition today!

I absolutely love seeing the camaraderie between the teams and individual athletes competing today! It’s always a great demonstration of support and sportsmanship.

Oklahoma had a massive floor score to propel them ahead of LSU with one rotation to go. The Sooners achieved a season best on the apparatus. The Sooners and Tigers have a solid lead heading into the final rotation, but it is gymnastics and anything can happen. Utah will need to be lights out on bars for a chance at moving ahead of LSU. Alabama is trailing and is not in a good position to advance to tomorrow’s final.

Davis (OU): FTY, One of the best Full’s in the country and she sticks it.

Durante will not compete on beam after her fall on bars early.

Webb (OU): Y1.5, fabulous stuck vault. That may do it for the individual AA title.

It is confirmed that Anastasia Webb will win the Individual AA title at the 2021 National Championship!

Leblanc (Utah): Giant half to jager to overshoot, tad shy on all her handstands, dlo, significant knee bend on the landing.

Trautman (OU): Y1.5, nicely done again. The multi camera dream has a terrible angle for vault landing view, but I don’t think she stuck it.

It’s extremely close between Utah, Alabama and  LSU for that second position. Utah was fantastic on bars and Alabama was stellar on floor while LSU had some major errors on the balance beam that were costly. Oklahoma will definitely be advancing.

Utah will be advancing to day two, Alabama will come in third and LSU will finish in fourth place,

Hargrove (Arizona): tucked full in, form issues and a hop on landing, whip half front full, nicely done, Fantastic amplitude on her double tuck to finish.

What a competition of high caliber gymnastics it was. LSU looked like they had the advantage, but the team could not maintain its lead through the bars and beam rotations. Multiple significant wobbles on beam were costly for the Tigers. Utah has arguably been the most consistent team all-season long and its consistency proved to be a huge asset here. Utah was steady on every event, while both LSU and Alabama struggled on one apparatus each. Oklahoma was the only team to score above a 198.0000 today. Tomorrow’s competition will feature Oklahoma, Utah, Michigan and Florida.

Stay tuned for official results for the individual national champions and All-America honorees.