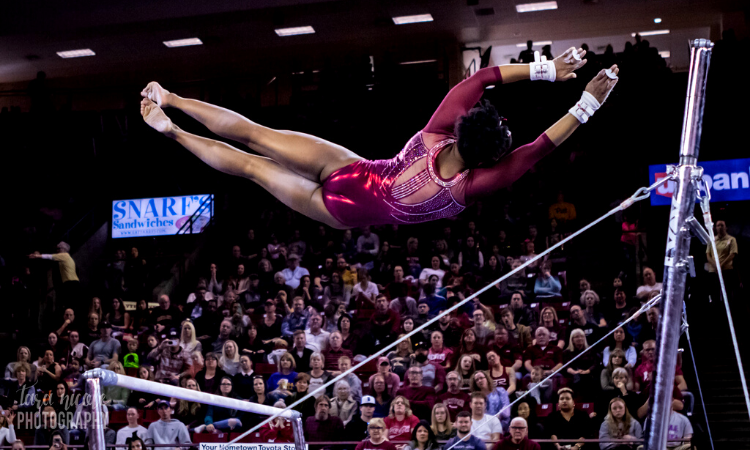 After a long two-year wait, it’s finally time for the NCAA national championships once again! We know our eight teams, our four all arounders and our 16 individual event specialists. Yesterday we broke down all the teams and their chances at claiming the title. Today we’re tackling the individuals and taking a look at the most likely contenders for the all around and event titles.

Four all arounders and 16 individual event specialists qualified to compete in Fort Worth. They will be split up into the two semifinal sessions with national champions determined at the end of the night.

For a more in-depth explanation on the new postseason format, check out our NCAA postseason guide. Finally, don’t forget to follow your progress in the 2021 bracket challenge here.

*Did not qualify to nationals.

The battle for all around national champion is absolutely going to come down to who is the most “on” during semifinals, because it could easily be any of these athletes. Trinity Thomas proved she’s the one to beat, turning in a whopping 39.900 performance in week five. However, with Thomas’s all around status in question after a lingering ankle issue, the race is wide open. Luisa Blanco, Lynnzee Brown, Lexy Ramler and Anastasia Webb have all gone 39.825-plus at least once this season.

The “bottom half” (and we say that in quotations because honestly, all of these gymnasts are equally capable of this title) of the contenders here should absolutely not be overlooked either—not to mention names outside the top 10, such as Megan Skaggs.

Brown, Ramler, Kennedy Hambrick and Neveah DeSouza are looking to become the first national all around champions in their respective programs’ history.

*Did not qualify to nationals on vault.

Evy Schoepfer is ranked first by NQS, but her average is slightly lower than the rest of the top five. When looking at averages, Anastasia Webb, Ona Loper and Haleigh Bryant most consistently hit the 9.9 mark. However, Bryant’s front handspring pike half is the clear front runner; if she nails the landing, she’ll be all but impossible to beat.

In addition to those listed in the top 10, we would be remiss not to mention Natlaie Wojcik, who has also recorded a perfect 10 this season. We also can’t overlook Olivia Trautman. She’s been hampered by a heel injury for most of the season but seems to be peaking at just the right time (as evidenced by her perfect 10 at regionals). Illinois State’s Angelica Labat posted a career-high 9.950 en route to becoming her team’s first nationals qualifier, out-scoring some of the top-ranked vaulters in the country in the process.

Believe it or not, no one has ever won a national vault title with a perfect 10. With seven gymnasts coming into this competition having already earned that coveted mark this season, this could be the year that streak comes to an end.

*Did not qualify to nationals on bars.

This one really feels like it is Trinity Thomas’ title to lose. No one else has been as consistently excellent on the event as Thomas, though she’ll face steep competition from Lynnzee Brown and Lexy Ramler if the recent Athens regional is any indicator.

Makarri Doggette has been a little hit-or-miss on bars this season, but she is coming in hot with a perfect 10 from regionals. Also, don’t discount anyone from California’s top-ranked bars lineup: They’re all capable of posting top-notch scores.

Speaking of Cal, no Golden Bear has ranked higher than 11th on any individual event at nationals. With so many strong bar workers—including Emi Watterson, Andi Li and Maya Bordas—going 9.975-plus this season, that will almost certainly change.

*Did not qualify to nationals on beam.

This is arguably the most wide-open event, with five athletes who have already achieved perfection this season; Lexy Ramler and Maile O’Keefe are about as evenly matched as it gets in gymnastics, Natalie Wojcik is the reigning NCAA beam champion and Anastasia Webb and Leah Clapper always seem to hit when it counts.

Don’t let the ranking or average score fool you: Trinity Thomas has proven that she’s more than capable of achieving perfection on beam. And while it feels somewhat disingenuous to call Thomas an underdog in this race, we do have to consider that she hasn’t competed beam since late February.

While O’Keefe would be Utah’s first beam champion since 2007, Ramler would earn the first national beam title in Minnesota program history.

*Did not qualify to nationals on floor.

While a healthy Trinity Thomas would absolutely be a title threat, her ongoing ankle injury is likely going to be a determining factor (it’s not certain that she’ll even be competing floor this weekend). With Thomas questionable, this is shaping up to be a battle between Kiya Johnson and Lynnzee Brown. Johnson hasn’t scored below a 9.950 this season and has notched three 10.0s. While Brown has “only” claimed one perfect score this year, she hasn’t scored below a 9.950 since week two (including back-to-back-to-back 9.975s).

Keep an eye on Minnesota freshman Mya Hooten, the only other gymnast who has snagged a 10.0 on floor this year. UCLA’s Chae Campbell is also one to watch: She’ll be rotating with an enthusiastic LSU. Competing after Bryant and Johnson could be the boost she needs to contend with the top floor workers in the country.

Lynnzee Brown was a co-national champion on floor in 2019. If she wins this weekend, she’ll be the first gymnast since North Carolina’s Courtney Bumpers in 2005 and only third ever to defend her title on the event.

READ THIS NEXT: A Look at the NCAA Nationals Team Title Contenders 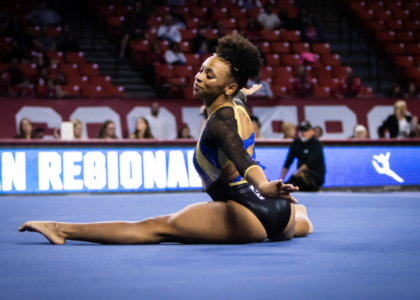