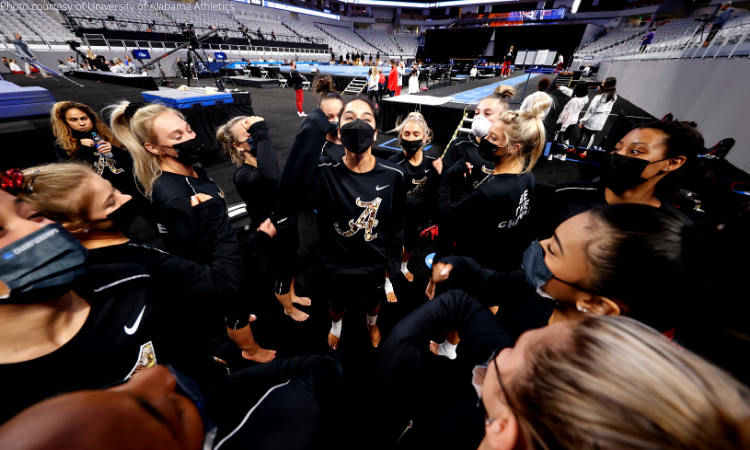 After noticing a renewed motivation coming from their team and motivated by the abrupt ending last season, Alabama seniors Lexi Graber and Alonza Klopfer came up with a mantra for their 2021 team: Women on Fire.

Graber explains how she and Klopfer saw the team. “[They’re] such strong and powerful individuals. We wanted to show that to the world,” Graber said. “I’ve seen these girls light the fire every practice and every competition. It’s very fitting for this group of women.”

It’s a fitting phrase as the team has been fired up through every meet, and it’s especially fitting for sophomore Luisa Blanco, named 2021 SEC Gymnast of the Year and Region 1 Gymnast of the Year, who is blazing her own trail lately.

After dipping ever so slightly the past couple of years, Alabama seems to be peaking at just the right time. Several factors have led to its success. 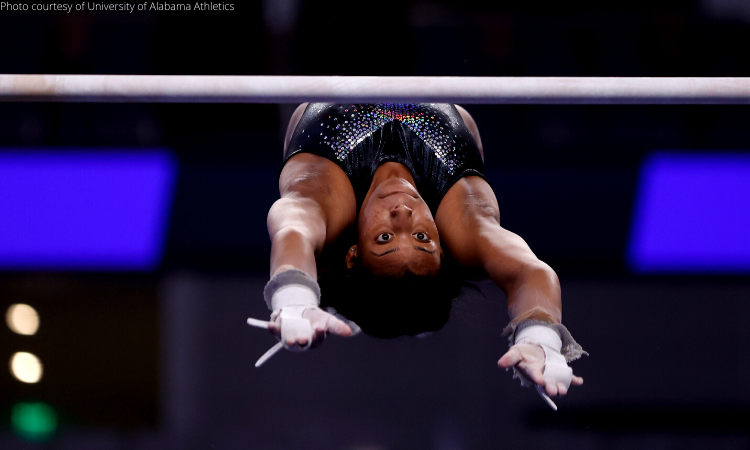 Head coach Dana Duckworth believes the Crimson Tide’s current success is mainly due to how it changed its processes. The way the team practiced in the last two to three years is quite different than how it practiced a few years ago. The gymnasts now have a laser focus on details and exceptional attention to things like shaping and stuck landings.

“Everything we have done in the fall has prepared our young women to be at their very best to handle two days in a row,” Duckworth said.

The WCGA Region 1 Head Coach of the Year explains it’s a culmination of the last couple of years that gave 2021 the extra boost. With the previous year’s truncated season, it was easy to find motivation because the team is grateful to even have the opportunity to compete this year.

“From a training perspective, we have seen that in the gym more so than any other team in the past,” Duckworth said. “That has been a big piece of why this particular team has had such success.”

Those returning from injuries have given Alabama an edge as well. Duckworth is quick to point out that those recovering from injuries are not only returning to compete but showcasing their resilience. It’s more about the mindset they had during recovery that determines how they would recover than the physical exercises or conditioning.

She mentions Griffin James, who recently returned from an Achilles injury, a testament to her hard work, attitude and mindset. A gymnast like James represents the team’s attitude.

In addition, Duckworth says having an athlete like Blanco raises the bar as well.

“You have somebody capable of scoring a 10.0 on four events, and we need all five other athletes in that lineup wanting to do the same thing and have the ability to do,” Duckworth said.

She also compliments her entire set of underclassmen.

“When you look at the athleticism of Shania [Adams] and Makarri [Doggette] and Mati [Waligora} and our underclassmen, you see how talented they are,” Duckworth said. “It’s exciting that they had incredible role models to be able to look up to right now in the upperclassmen.”

While she praises the underclassmen’s success, she’s quick to credit the seniors who’ve inspired them. 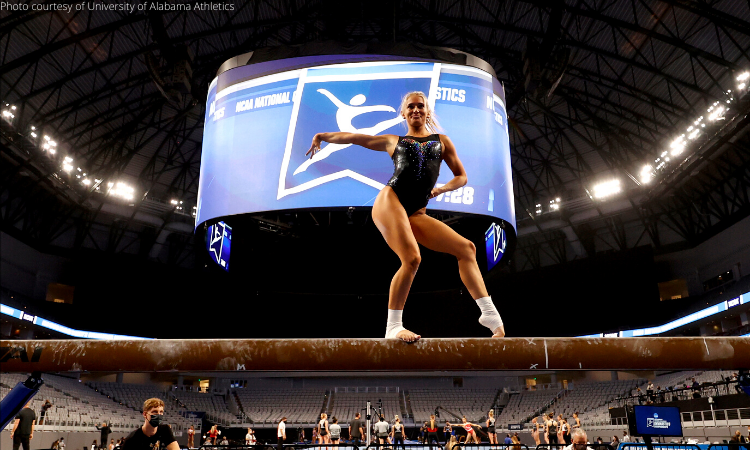 There are many qualities that Duckworth admires in her athletes. She says that Graber is “literally the toughest person I know.” She admires the process-oriented Klopfer, who “does her mental choreography every single day in practice.”

The seniors have been the foundation of inspiration, galvanizing the entire team.

“Those examples are such a great rock for our underclassmen. The incoming freshmen we have next year are dynamite, so the future looks bright,” she said.

Duckworth maintains it’s a combination of the senior leadership buying into the detail and the team’s conditioning that have gotten the Crimson Tide this far. She says her assistant coaches Ryan Roberts and Bill Lorenz, who she believes are ”tremendous with the process and building the progressions we need.”

She sees different skill-sets coming together to bring the best out of the student-athletes.

“We have a beautiful combination of staff that is all on the same mission,” Duckworth said. “We all have different strengths, so I believe that you’re seeing that coming out of your athlete.”

In addition to coaches and athletes, other intangibles have gone into building this year’s red-hot team. Alabama uses the John Wooden pyramid of success, sports psychology, mental choreography and mental imagery. The psychological team has helped galvanize this year’s gymnasts and is a big piece of the whole picture.

“When you start to hear your athletes speak the language the coaches are using, you recognize what we’re doing is working because the results take care of themselves when they trust what’s being taught,” Duckworth said.

When asked how the team coped during adversity, Duckworth doesn’t hesitate. “Life is going to throw us curve balls. When you can win in the face of adversity, you are developing champions.”

However, there’s another piece to overcoming adversity, too.

“As a leader, you want to lead by example,” Duckworth said. “You show humility, you praise the things that need to be rewarded—those things that you want to see repeated. You use how you overcame adversity as a gift and the opportunity to always be growing, learning, becoming a better version of yourself.”

And while winning a national championship this weekend is the obvious goal, it’s not the only one Alabama is entering the weekend hoping to achieve.

“Women on Fire is much more than results. [It’s] top to bottom confidence,” Duckworth said. “They have been resilient. They have been accountable to one another. My goal for this weekend is [that] they will put it all out there and not hold back for a second. I hope that we spark it at the beginning, and it turns into a huge bonfire all the way to Saturday night.” 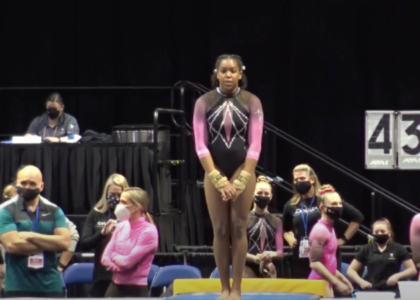 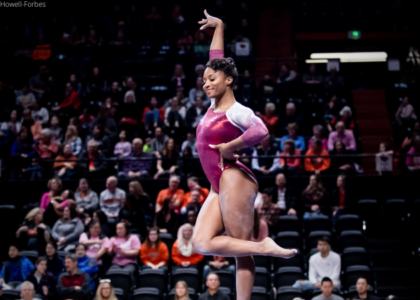 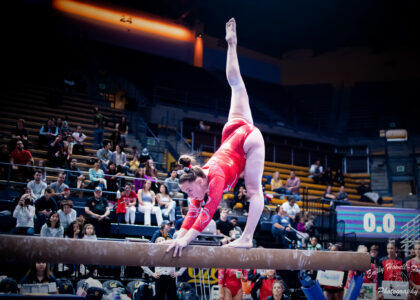