As of writing, no teams or individuals have indicated that they will be pulling out of nationals. Of course, that may change.

It’d be silly to talk byes. Here’s who is competing, between USAGs and NCAAs.

Vault: If you missed Angelica Labat sticking a huge Yurchenko 1.5, be sure to keep your eyes peeled at nationals. She has hit 9.900-plus four times this year. The Lindenwood vault crew gets another go at the postseason this weekend at USAGs. Aleah Leman has the highest potential, with a 9.925 on the year.

Bars: Hannah Demers has been superb for Central Michigan all year, with no misses on bars all season. Her 9.925 in Athens was not her first number over 9.900. SEMO’s Jolie Miller has been very consistent on bars over the last handful of meets. If you need a 9.825 to shore things up, she might be your answer.

Beam: Rutgers’ Hannah Joyner is a program-changing athlete. She’s been stellar in her first two seasons as a Scarlet Knight, and shines especially on beam where she’ll compete in Fort Worth. Baily Bunn is a breakout star for Kentucky in the all around, and she’s especially consistent on beam. Bunn hasn’t scored below 9.875 since early February.

Floor: If you didn’t catch Anna Kaziska at regionals, you missed out. She scored a 9.900 and delighted Kathy Johnson-Clarke. She nabbed a 9.875 on beam, too. USAG editor Rebecca would be furious if I didn’t remind our readers what a star Madeline Gosé has become for Texas Woman’s. She’s excellent on floor, and nabbed a 9.925 at MICs on beam, too.

Starts, Sits and Pickups for Nationals

Vault: Maya Bordas didn’t vault in Morgantown. We saw Natalie Sadighi instead; her scores were in the same universe as Bordas’ have been this season, so it’s hard to say who will be in the lineup at nationals. Chase Brock popped into this lineup for LSU and scored a 9.900 and 9.825. Sami Durante is the other option, with a similar spread of scores on the year. It’s fair to assume they’ll be fighting to win this spot at nationals.

Bars: Um, Emily Gaskins is an all arounder now? And…really good at it? I know. I was surprised, too. With Mati Waligora out and Lexi Graber limited, Gaskins stepped up in a big way. It’s hard to say who will be in which lineups between Graber and Gaskins at nationals, but if you need to spread Gaskins across more events and can risk zeros, the ceiling is high. If Karrie Thomas is unavailable on bars at nationals (see below), we could see Jordan Draper back in the lineup in her place. Alexia Burch seems here to stay on bars after a few weeks absent from the lineup. Lexi Montgomery was out of bars in favor of Halle Remlinger in Athens. Montgomery had two consecutive misses, so it’s fair to think Remlinger will keep the spot.

Beam: Karrie Thomas was injured during her beam dismount in the Tuscaloosa final. We don’t yet know how severe that injury was and whether she’ll be available in two weeks. The good news is that KJ Kindler is usually very forthcoming about these things, so we should have an update before nationals. Vanessa Deniz has stepped in on beam a few times this year and seems to be the No. 7 routine, so we may see her if Thomas is unavailable. Or, Jenna Dunn could return to the lineup after being replaced with Olivia Trautman. Haleigh Bryant was just…off at regionals. She was pulled from the beam lineup for the final in favor of Alyona Shchennikova. Bryant is definitely an all arounder in Jay Clark’s vision for his team, but with a national championship on the line we can be sure that he’ll pull her if she doesn’t seem on.

Floor: Griffen James scored 9.900s on floor in both regional competitions. Trautman is fully back in a big way. First two floor routines of the year? 9.950 and 9.925. Not to mention a 10.0 on vault. Second “surprise she’s an all arounder!” of the past weekend was Abby Heiskell. Much like Trautman, she nailed her first two floor routines of the year for a 9.950 and 9.900. She was in the lineup in Naomi Morrison‘s spot. The Florida floor lineup. It’s a bit of a situation. With the news of Sydney Johnson-Scharpf‘s Achilles injury, and after seeing her backup, Halley Taylor limp off the floor after warmups, it’s hard to know who will be in the lineup in two weeks. Payton Richards stepped in after missing the lineup in the regional semifinal and her miss at SECs in March. 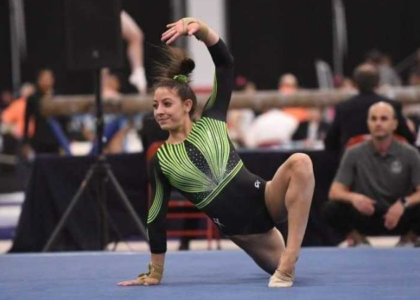