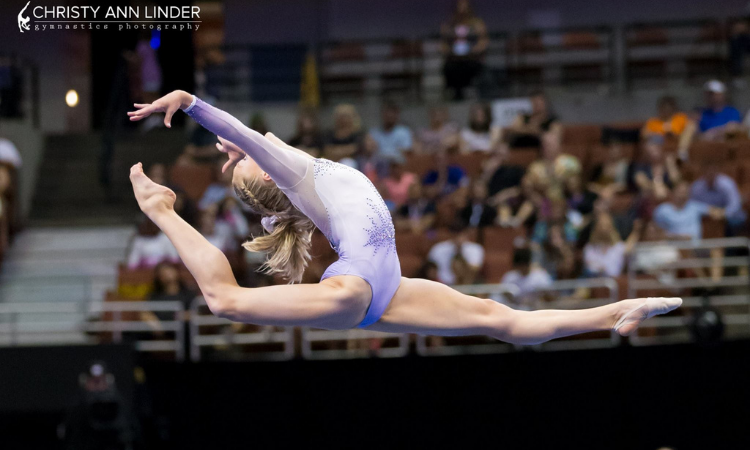 A total of 17 NCAA commits in the classes of 2021, 2022 and 2023 are scheduled to compete at the Winter Cup this weekend. The main session of the senior competition will take place on Saturday, Feb. 27 at 12:30 p.m. EST, while the juniors and the remaining seniors will compete on Sunday, Feb. 28 at noon EST. The Winter Cup is normally a men’s gymnastics meet, but this year’s edition is the first time it will feature a women’s competition.

Two athletes are also committed to Auburn: world champion Sunisa Lee in the class of 2021, and 2023 graduate Lyden Saltness.

All other colleges will be represented by one gymnast. In the class of 2021, world champion and Olympic qualifier Jade Carey has signed with Oregon State and Alonna Kratzer with Missouri, while in the class of 2022 eMjae Frazier is committed to California, Karis German to Alabama, Lilly Lippeatt to LSU and Faith Torrez to Oklahoma.

The only uncommitted athlete in the class of 2022 to compete at the Cup is Ciena Alipio.

Elle Mueller and Lexi Zeiss, in the class of 2024, will also compete in the senior competition. Curiously, Zeiss is scheduled to compete at the Nastia Liukin Cup on Friday and will make her elite debut at the Winter Cup later that same weekend.

Olympic champion Laurie Hernandez will also compete for the first time since 2016 this weekend.

Tune in on NBC at 12:30 p.m. EST on Saturday, Feb. 26 to watch the main session of the women’s senior competition. The junior competition, together with the remaining seniors, will be broadcast by FloGymnastics on Sunday, Feb. 27 at noon EST.

READ THIS NEXT: Previewing the 2021 Nastia Liukin Cup