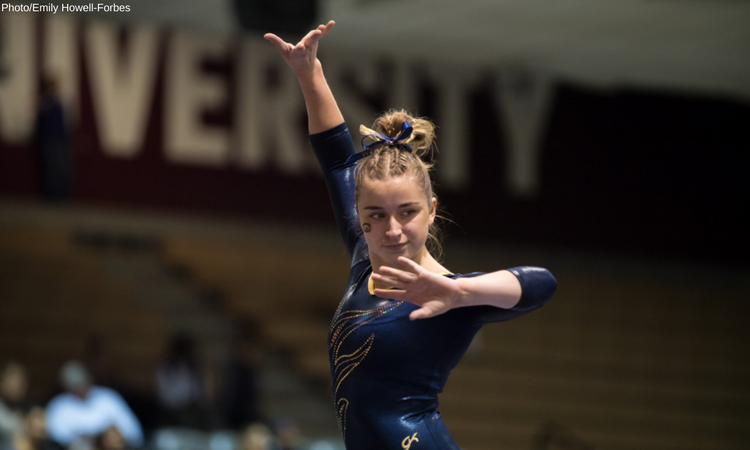 MPSF leader UC Davis and cross-town rival Seattle Pacific head to Washington tonight in basically the only meet of the weekend that isn’t a senior night. All three teams set a season high last weekend, so if they can keep their momentum going, it could be an exciting night. For Washington, success this season has meant minimizing the damage on vault before pulling away with nationally ranked beam and floor rotations. Its current highest home score is only its third highest overall, so a 197+ would provide a needed RQS buffer. Davis had a record-setting weekend at home last week, breaking 196 for the first time this season; watch for all arounder Kelley Hebert, the new MPSF all around record holder. Seattle Pacific’s all around star Darian Burns set an all around career high two weeks ago, and the team set its ultimate season high at Washington in 2017, so it’s a great opportunity for a valuable road score.

Davis is wearing the sparkle ombre leotard, Washington in the solid purple with mesh top, and SPU in the classic cursive one. It’s Salute to Service night at UW so we had a a colors presentation from a ROTC group.

Alexis Brown continues to exercise her first amendment rights, kneeling for the national anthem while holding hands with her teammates at Washington tonight. https://t.co/4ZPCqxlbH3

RILEY – UW: High Yurchenko arabian and a stick! Harry the Husky has the money gun today. 9.775??? Oh, Washington vault scoring, I can’t with you.

ZIMMERMAN – SPU: Caught a stick on her 3/2 dismount.

ROY – UW: Tsuk half with a midsize pace forward, pretty much her usual.

BRANE – SPU: Clean on acro series, a bit short on switch 1/2 but steady, beat to straddle 3/4 is great. Cartwheel gainer full with a hop.

GOINGS – UW: Hasn’t been in this lineup for a while, more amplitude than I’ve seen in a while and a slightly college-stick-y but solid landing!

LANDESS – UCD: Toe on, barely makes it over the top there, to Gienger? to overshoot a bit messy. Double arabian dismount is nice with a step forward.

HOFFA – UW: Usual huge full, splits her legs out at the end and sticks it.

BURNS – SPU: Leg form for daaays, a little lean back on her flic loso but beautiful. Great leap series, punch tuck full with a bounce.

COPIAK – UW: Normal full with a step back but miles of amplitude.

HEBERT – UCD: Half turn to Jaeger with messy legs, overshoots a handstand on HB and comes off. Decent bal, almost falls on squat on, pikey double layout wit a hop.

BROWN – UCD: True Shaposh which is pretty much my favorite skill, lost track a bit because Harry the Husky walked in front of me, leans to hold the stick on double back dismount

Harry is killing it tonight, handstands and all sorts of crazy dancing as well as helping with the money gun.

No Roberson for Washington today but came out none the worse for it. She’s probably just being rested – she’s suited and wearing grips already to prep for bars.

MATSUNE – SPU: She’s been doing one handed beam all season with one wrist in a fairly robust brace, Stella Savvidou-style. She’s struggling to put her jacket on over that thing, but beam routines are no big deal. Pretty front aerial – back tuck, split 3/4 in combination is great. Hitch kick to side aerial back tuck full – that was stellar.

Season high for Washington on vault even without Roberson tonight! Lots of sticking, which is definitely the path forward. Matsune on beam makes my life every time I see her. Davis looks seriously hot in beam warmups.

NELSON – UW: Literally born to be a lead off, caught close on her release and muscled up after transition. Step on super tightly tucked double back dismount.

GOINGS – UW: Beautiful Jaeger, lovely straddle back, full in dismount with split legs and a hop. I love her being in lineups again!! I

YEKTAPARAST – UCD: Missed some stuf but

ROBERSON – UW: Pike Jaeger to overshoot is rad, slightly shy on a handstand, duble back to DEAD stick. That was at least as good as some of Duranczyk’s 9.9s for basically the same routine, and yep, 9.9 with a 9.95 flashed!

DURST – SPU: Obsessed with her choreo. Just slightly quick on some of the lunges out, but SPU is having a great day.

HEBERT – UCD: Just caught a step forward on her 3/2 dismount.

SAN ROMAN – SPU: Has one of Fragapane’s old floor musics, good opening double back, backspin in the style of Frags – I  wonder if the huge back brace helps or hurts her?? – closing double pike STUCK. Team flipping out a little bit, so great.

BURNS – SPU: OOB on double pike, sees it and pulls her foot back in but her toe hit 🙁 Leap series is gorgeous. Baby hop forward on double back

Everyone on track for a great total! UW is used to going onto beam and floor with essentially no margin if it wants to go 197, so this is quite a luxury. Davis a little short of 196 pace but could still put up a very strong floor score.

WIRTH – SPU: Handspring 2/1 vault, nice and controlled with a hop forward. That one can get away from her sometimes – as it does most everyone who competes it – but that was solid.

ROSE – WASHINGTON: Great acro series, drops out of Y turn series. Switch to split, not certain if that’ll cost her a tenth of bonus or not. Cat leap to side aerial to beat, side aerial tuck back full.

PRESSWOOD – UCD: Fun country music and performs it well, bit of a rebound on closing double back.

ZIMMERMAN – SPU: Deep on Y arabian, hangs on with a step back.

NELSON – UW: Press handstand mount series is my life, airy and steady on flic loso series. Great full turn, clean through leap series. Lands kickover front and SMIRKS, stick on 3/2 and the money gun goes off. That was killer.

HUSKIE – SPU: Tsuk full with a step back, nice and controlled!

KESSLER – UCD: Foot on the line on first pass, didn’t see if that went out or not. Great front lay front full.

BURNS – SPU: FTY, not stuck but salutes and runs away before anything can happen like an absolute pro.

Direct quote from announcer: “A change for SPU, Shelbi Spivey is competing vault in Zahra Lawal’s spot. This is not an exhibition. This is for real.”

GOINGS – UW: Triple series super solid, awesome leap series, standing LOSO gorgeous. At the end of the LOSOs she likes to pivot her front foot to turn it out which I personally adore but I think there are routines where that’s literally all she gets deducted on. Side aerial back full dismount, college stick and a 9.9.

HEBERT – UCD: Something thru double pike, underrotated and rebounds a little bit. Drilled combo pass. She’s so much fun to watch, I saw a 9.9 flashed… 9.875!

SPIVEY – SPU: Yurchenko arabian is off line and a bit deep but a great addition out of the exhibition spot!

ROBERSON – UW: LOSO-LOSO is awesome, she absolutely FLIES on her cartwheel-gainer full. Definitely one of the best being done, the pop is amazing.

BROWN – UCD: The dance in this is stellar, Just a bit of a scoot back on opening double pike, other two landings great. 9.9 from the same judge as Hebert, same 9.875. This has been suuuuch a good rotation for the Aggies – 49.2 with that score!

ZIMMERMANN – SPU: Pretty handstands! That’s really all I caught of that with two teams standing in between.

SPIVEY – SPU: Great handstands, full turn to open double back with a step.

ROBERSON – UW: Front 2/1, one of the best landings I’ve seen – on the best days she can absorb the twist in her front leg before the second drops. Rudi-LOSO is one of my favorites.

JOHNSON – UCD: Crashes FTY to her knees. UCD assistant is working really hard to keep the UW team away from the vault runway – it sounds like having them moving around in peripheral vision is presenting a problem for some of the girls.

SCHAEFER – UW: Bouncy on first pass, but I love the presentation in this routine. It’s kind of coy and mischievous.

BROWN – UCD: Good y full with a controlled pace back.

A hit from Kessler closes the Aggies out with a 195.5!

HOFFA – UW: Great on double pike – she can struggle a bit with control. For some reason the scoreboard just flashed a 9.475 for her and then it immediately went away. Nailed double back, awesome!

SPU having some hiccups on bars – Sienna Brane lost her swing and had to remount.

WASHINGTON – UW: Um, they just muted her music down to make an announcement in the middle of it? That’s not a thing? She’s fine though, best double back of the day. Front lay front full and dances out of it. Shuffles out of double pike.

BURNS – SPU: Clean and steady, good double back dismount. She is such a weapon.

BURLESON – UW: Solid double pike landing, 3/2 to 2/1 pass is beautiful and controlled. This dance section in the middle is my favorites, wiggling her eyebrows and giggling at the team. Front leg sometimes looks a little low on her switch ring but stills usually show that it’s fine, how judges feel about it varies day to day, but with a beautiful controlled 2.5 twist that’s really the only question in that routine. 9.925 and the Huskies have a season high!

The meat of Washington’s lineups was just as solid as they’ve been since mid-February; the difference today was that Burleson absolutely zoned, picking up an all around career high and FOUR individual titles. Those few extra tenths boosted the team to a season high; and with Washington’s RQS drop score being a home meet, it’s great for rankings too.

Davis and SPU didn’t quite make season highs, but they both had strong and valuable road scores that they should be really pleased with. Darian Burns for SPU picked up third place on vault, and UCD’s three all arounders – Kessler, Brown, and Hebert – are such a powerhouse squad.

So close to a sweep for Burleson, who finished second on bars!