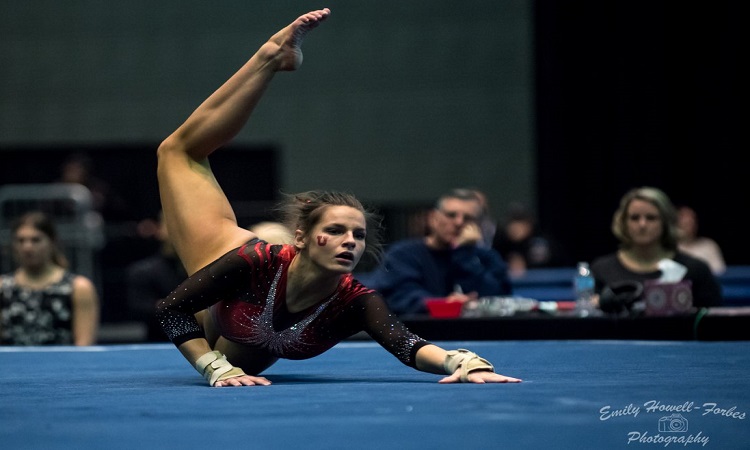 It’s a Saturday top 10 matinee in Ann Arbor, and I’m here in the Crisler Center to bring you all the action! There’s a lot of excitement around this meet, and things couldn’t be closer: Michigan’s high home score is a 197.550. Utah’s highest road score is also a 197.550. Hold onto your laptops because this could be a back-and-forth, routine-by-routine battle. This is Utah’s meet to lose, but if the Utes have some stumbles, Michigan could use senior night excitement to take it.

Last week the Utes were upset at Cal, the first time the Bears have won that matchup in program history in a dual-meet setting. MyKayla Skinner only competed bars and beam due to some ankle pain; if she’s healthy, expect her back at full force today. Utah will not want to fall two weekends in a row, and Skinner is a big piece of its success on vault and floor. MaKenna Merrell-Giles, Kari Lee and Missy Reinstadtler are also crucial all arounders. Merrell-Giles is a superb vault and floor worker, and keep an eye on Lee’s beam set.

For the Wolverines, having Lauren Farley back in the bar and beam lineups was critical last week at Oklahoma. Farley’s presence there takes pressure off Emma McLean, allowing her to focus on her best events in vault and floor. Lineups are not quite solidified in the post-Olivia Karas era, but they are taking shape. Madison Osman was dressed for the first time this year last weekend, so look for her to possibly be a presence on vault, bars or floor. Lexi Funk has stepped into the all around in Karas’ absence, and Polina Shchennikova has consistently added beam.

Getting a strong start on vault is crucial for Michigan; if the team can put up a mid-49 score there, the Wolverines will be in a great position going into the rest of the meet. Utah is pretty consistent across all four, but the Utes are especially capable of huge numbers on vault and floor and could use a big vault number to take the lead halfway through. Keep a close eye on the third rotation. Michigan is No. 4 on beam and Utah is No. 3 on floor—both teams’ best event rankings.

Injury report: MyKayla Skinner (Utah) was limited to bars and beam last weekend with a tweaked ankle. Madison Osman (Michigan) has not yet competed in 2018 due to a knee injury but was dressed out for the first time last weekend.

The Wolverines will be wearing the many Ms leo, and will have orange ribbons in their hair. Coach Bev Plocki’s husband is battling leukemia.

Our team will be wearing orange ribbons to support Jim Plocki and his battle with leukemia.https://t.co/dgcoMDXVjM pic.twitter.com/2rehrgzUY5

Lots of 〽️'s in today's leo. Come see them in person at 2 p.m. today in Crisler Center. #LeoWatch pic.twitter.com/zRV1lWp5uq

Michigan projected lineups are in!

Here are our projected lineups heading into warmups. #GoBlue pic.twitter.com/aNAyvhbP7S

Get ready for big Pac-12/Big Ten showdown between No. 4 @UtahGymnastics & No. 7 Michigan starting at noon MT in Ann Arbor. Live on BTN or follow live Utah commentary & scores at https://t.co/UtBZK2Qdln. #goutes pic.twitter.com/7U9VCk4vsD

Crisler Center is rocking! Lots of blue glow sticks during march in, and a huge cheer for Olivia Karas as she marches in on crutches.

Wong (Utah): Her NCAA debut! Short first handstand giant full Tkatchev some knees. Bail hand lovely. Full in, small step but covers it. Her team is so happy for her! Lots of hugs and cheers. 9.825

Brown (UM): FTY. Little soft in the knees, some pike, great landing. Better than some of her recent vaults.  9.775

McLean (UM): FTY, think she stuck but feet were behind a scoreboard. 9.9

Utah’s lines and form on bars are incredible. See that rotation in person if you can! Just lovely work top to bottom. Scoring not necessarily strict, but definitely not inflated (yet…). Michigan had some nice vaults; the Wolverines have worked to clean up some landings. Playing it a little safe with only one Y1.5, so not the biggest vault score, but a solid start.

Townsend warming up the new double front dismount. Will it make the lineup instead of the double tuck? Stay tuned!

Reinstadtler (Utah): FTY, flares, fair sized hop back. 9.7, fair for the size of the hop compared to other scores we’ve seen.

Tessen (Utah): Y1.5, medium step back and to the side. Might take two steps for a little shuffle. Great form in the air. 9.75, they took two steps.

Shchennikova (UM): Maloney + pak, gorgeous as always. Those toes! Giant full + double tuck stuck, problems in the full. Got stuck halfway and broke form, but got it around. 9.8

Roberts (Utah – exhibition): FTY, piked, but great landing – better landing than most in the lineup. That’s a nice backup.

It’s close friends! I love it! Both teams look good. Michigan has been a touch cleaner on landings, and that’s the difference. Utah was just missing some oompf (technical term) on vault and couldn’t drop those landings in. Next rotation should be a banger: both teams shine on their next event! Crisler is ready. Utah’s contingent here is ready. I am ready!

Funk (UM): In for Townsend last second. BHs loso, no hesitation and no movement on landing. Switch half, little wobble, doesn’t connect. Beat + popa, there’s the connection. Side aerial + full, tiny hop. She has a great carriage on the beam. 9.8

Lee (Utah): She’s so serious and it works for her. 2.5 some knees, but excellent landing and rotation. Switch+ swithc ring half, front leg a touch low. Double twist loso, nice. Much better than she warmed that pass up. Front lay front full, some arch in both, some leg sep. Not her prettiest pass but good landing. 9.8

Farley (UM): Pressure is on now after two low scores. Great attention to details: fingers, toes, head position. Switch + split solid. Bhs loso loso solid but back leg on the bhs. Crisler loves that. 1.5 turn LOVELY stays on releve even after. Side aeral + split. Gainer pike of the end stuck. That was excellent. 9.9

Merrell-Giles (Utah): Love her use of head movement in the choreo. Piked full in BIG. UM fans raise hands saying she’s OOB, but I don’t think judges caught it (and I couldn’t see her feet). Switch ring + tour jete half, nice. 1.5 punch lay some legs punch front, lost a little height. Grins at her team in the choreo. FHS rudi straddle, huge. Nice ending. 9.75, must have been out.

Skinner (Utah): She’s looking at the crowd like, watch me! Double double, crowd cheers, great landing but not super hight. Tour jete full, not quite around. 1.5 through to double, pretty. Her twisting form is really nice. Punch front. Full in, some leg sep, but solid landing. Utah fans counting “10”. I don’t think so, but she’ll score well. 9.95, yep.

Roberts (Utah – exhibition): Double pike, excellent landing. Missed second pass, but good landing. Switch side, missed split, wolf full, not quite around. rudi + barani, some trouble there on the rudi landing, so the barani was off line and low. Some work to do in that routine.

This is still pretty close, but Utah is opening up the lead. The Utes are stellar performers. They pay great attention to the details, like sight lines, head position and fingers and toes, that make a routine really shine. Michigan was wobbly on what can be its best event. No falls, but a bobbly rotation to be sure.

The Michigan dads are on the floor, being told to “do what their daughters do” i.e. poses from the floor routines. They are not feeling it, but they are getting big applause introducing themselves. I’m looking at a lot of striped overalls right now.

Stover (Utah): Front aerial, breaks at hips. Repeats, solid, bhs, got the connection. Little bobble on full turn. UM is playing do the twist? Beat + ring. Front toss, little off but covers it. This is SO not beam music. Switch + straddle. Cartwheel gainer full off the side, hop covered as salute. 9.7

Townsend (UM): Has the crowd clapping immediately. Front through to double tuck, good landing. Switch half + popa. Not extremely into the choreo, I want her to perform it more. Double pike, great landing and the crowd screams. Whip + double stuck COLD. That’s how to end a routine. 9.825

Merrell-Giles (Utah): Again, her use of head position is exquisite. Switch + split, nice. Bhs bhs loso, solid, crowd appreciates it. Front aerial + beat, nice. RO double full stuck, she had issues with that in warmups, good to see her hit it! 9.875

Marinez (UM): Her last floor in Crisler. FHS front lay rudi, slides out of it a little. 2.5, nice rotation but steps to the side out of it. Switch half + wolf full. Double pike, leg separation but nails the landing. Lots of love from her team. 9.825

Brown (UM): Not performing the choreo as much as I’d like. 2.5, drops the landing right in. Great start. Double pike, great height lands with feet a bit apart. Tour jete half popa, nice. 1.5 front lay, big arch down and leg sep. Huge cheers for the senior’s last home floor. 9.85

Reinstadtler (Utah): Gorgeous toes. Front aerial , big bobble breaks at the hips but stays on. Bhs loso for the connection, solid. Side some, swings arms but not a big bobble. She has very fluid movement. Switch + straddle quarter nice. Cartwheel + gainer full off the side, stuck. Good finish. 9.675

Crowd realizing Michigan will take this one, screaming.

This was not Utah’s best showing. The Utes had a great bar rotation, and were solid on floor, but some beam bobbles and hoppy vault landings kept the score down. Michigan also had problems on beam, but was cleaner on vault and had some truly huge floor tumbling. That’s two upsets in a row for Utah. Some work to do heading toward post season.