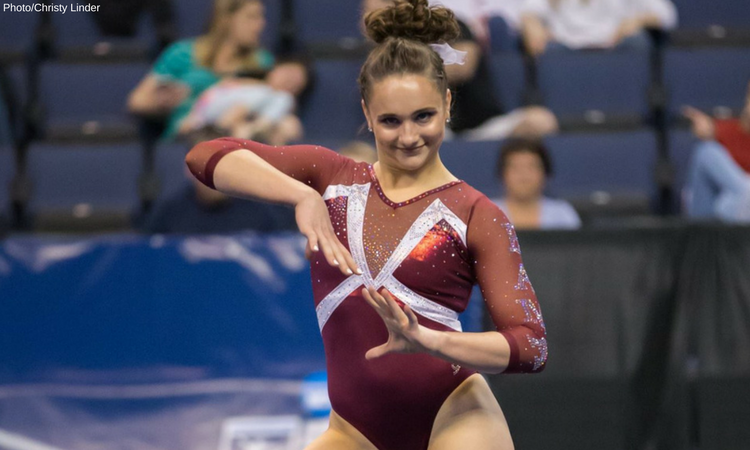 Alabama welcomes Kentucky to Tuscaloosa this week, seeking a new score to improve its RQS situation, as the Tide currently stands to drop a 195.800. Last week, they put up their best number of the year with a 197.075 against Florida, so they’ll be looking to replicate similar or better results now that they’re back in Coleman Coliseum. Key to this will be Kiana Winston’s success in the all around—after a so-so vault and a crashed dismount on beam at Florida, she’ll want a cleaner performance to boost the team’s total.

Kentucky will be looking to bounce back from its disastrous loss at home to Georgia last week with a strong road meet, and considering that being better on the road is an odd trend the Wildcats have picked up, their outlook is good. They’ll need strong performances from all arounders Mollie Korth and Alex Hyland, as well as a hit beam rotation, which the Cats failed to do last week. If they can put all that together in the same night, they might be able to hit 197 for the first time this season and drop of the 195s currently counting in their RQS situation.

8:28pm: Georgia and Florida are finishing up on SECN, so as soon as they switch over, we’ll get started!

8:36pm: Carlisle, UB: Jaeger, good. Short on the following handstand. Bail was fine. Full in with a stick!

Poland, UB: Ooh, interesting. I think her first time on bars? Initial handstands are off and really weird. Gienger is low, Bail is iffy. DLO with a shuffle.

8:42pm: Coca, UB: arched over on first handstand for fall. Big Jaeger after getting back up. Bail is good, as is final handstand. Full in, step forward on the dismount

After one rotation, Alabama leads Kentucky 49.3 to 49.075. Graber and Guerrero are tied at 9.9 for the lead on vault, while Korth leads bars with another 9.9.

8:55pm: Graber, UB: Gienger is good, little leg sep. Bail nice, a little floppy. Full in gets a little crazy in the legs and chest is low.

8:57pm: Mahoney, UB: Toe on to handstand is good, hits Maloney today. Bail is solid. Final handstand is nice. Full in, nice and floaty, and stuck! One of her best ones.

8:58pm: Stuart, VT: FTY, looked stuck when she did it, but slow-mo showed a itty bitty hop back.

Dickson, UB: Nice first handstand. Bail a little unclear. Huge Tkachev as usual. Full in, a little messy in the legs but another stick! Alabama is going for it tonight.

Rosa, VT: FTY, hop back. Nothing really special in this vault lineup tonight.

9:01pm: Korth, VT: Y1.5, a little knees before she lands, and a stutter forward on the landing. She’s done better.

After two, Alabama’s lead improves 98.675 to Kentucky’s 98.275. In a surprising turn of event, Shea Mahoney, who was out of the lineup at one point for her inconsistent Maloney, wins bars with a 9.975, while Graber and Guerrero’s 9.9s hold to tie for the vault title. Beam is where the moment of truth will be for both teams, so these next two rotations should be exciting!

Desch, BB: Front aerial to beat, good. Bhs loso, biiiiig balance break at the hips but stays on, doesn’t touch. Switch to split, another lean but okay. Bhs bhs 1.5 twist dismount. Not her best, but stayed on.

9:11pm: Stuart, FX: Double pike, looked pretty crunchy. 1.5 twist to front lay, a little short of rotation but puts it to her feet. Rudi to finish, really bouncy on the landing but stays in bounds. Not the best Kentucky could have done for a lead.

9:13pm: Armbrecht, BB: Front aerial to beat, great. Bhs loso, and a fall. Welp, this can’t be good. Split to sheep, another bobble. Roundoff to double full, bounce in place.

9:14pm: Poland, FX: Front tuck through to Rudi, very nice. Front double full, excellent! Only two passes in this routine. Love the choreo here to close! Much better for the Cats.

9:18pm: Warren, FX: Double back is solid. Nice straddle positions in her dance elements. Rudi to back tuck, should have been a layout I think, and I think she went out of bounds? Hard to see from this angle. Front full to front tuck, doesn’t travel much but generally fine. Not one of her best ones.

9:20pm: Graber, BB: Bhs layout 2ft, a little piked, good. Jumps are fine. Front toss, surprised by the impact and wobbles, but stays on. Roundoff double full, stuck! Mixed bag but she stays on, that’s what they need right now.

9:24pm: Winston, BB: Split positions gorgeous as usual. Front aerial, wobbled and couldn’t connect out of it. Goes for a bhs layout 2ft as her backup series – girl who has that as their backup series?? Only KiWi.

9:26pm: Dukes, FX: Just the double tuck still to open, no upgrade. Rudi loso for her second pass, not as floaty as she can do, but solid. Double pike to close, very nice! Easily Kentucky’s best.

9:30pm: Dukes, FX: Double pike to open, nice and high. Front full to front lay, good. I love that front aerial to illusion in her choreo. Double tuck to close, should be another big score for Kentucky!

Alabama maintains its leads despite the miscues on beam, with a 147.7 to Kentucky’s 147.3. Guerrero leads beam as well at a 9.9, while Korth leads floor with another 9.9. One more to go, and Alabama could very well end up with a 197 for the third week in a row!

Stuart, BB: Dance elements lovely. Bhs loso, perfectly solid. She sticks her dismount! Distracted slightly from play-by-playing skills because they just announced a drop in Poland’s floor score, something huge like 3 tenths. Still waiting on the explanation, but it has to be SV from that kind of a drop.

Guerra, FX: Double tuck to open, good. 1.5 twist to front lay, right to the line but in. Double pike, really bouncy and steps out of bounds. Disappointing end to what was a solid routine up to that point.

9:42pm: Korth, BB: Bhs loso, solid. Switch leap to back tuck, nice. Round off double full, with a stick! One of the best beams I’ve seen from her. Just updated on Poland’s scoring issue, missing a B skill somewhere and somehow that costs her three tenths.

9:44pm: Graber, FX: Ooh, Lexi making her floor debut! That means she in the all around tonight, good for her! Just the double pike to open, she’s capable of a piked full in but keeping it easier tonight. Front lay to front full, solid. Rudi to stag, a little bit of helicopter legs in there. I like the choreo in this routine – definitely would love to see her in this lineup again.

9:48pm: Armbrecht, FX: Double pike to open, good. 1.5 twist to front lay, some uprise out of the first into the second but none of these floor routines have really had the float that we love to see. Rudi to stag to finish, great control in the jump. Another good one for Bama.

9:50pm: Kwan, BB: Bhs loso, balance check but keeps it smaller than it could be. Switch to ring stag, solid. Cat leap to side aerial to back tuck full, stick! Also, apparently Garrison submitted an inquiry regarding Poland but judges stuck to the score drop.

9:51pm: Desch, FX: Hey, she hit the double arabian tonight! Front full, front half, split jump to front tuck, nicely done, control evident throughout. Double back, had way more energy on that tonight than I’ve seen her do before. Another solid hit!

9:55pm: Winston, FX: Opens with the DLO! Not a great landing on it though, keeps it on her feet but very short. Front lay to front full for connection pass, nice. Double back to close, very nice. Love her switch ring at the end, her splits are so nice.

9:59pm: Guerrero, FX: Double pike to open, not putting her E pass in yet. 1.5 twist to front full, good control. Love this choreo segment, very krump-inspired in her hip-hop style. Rudi to finish, not as much distance as she normally gets but solid! Another great set for her.

Make sure you check out the rest of our liveblogs this weekend, especially the big rivalry matchup of Utah @ UCLA on Sunday. See you guys next week for more Friday Night Heights!