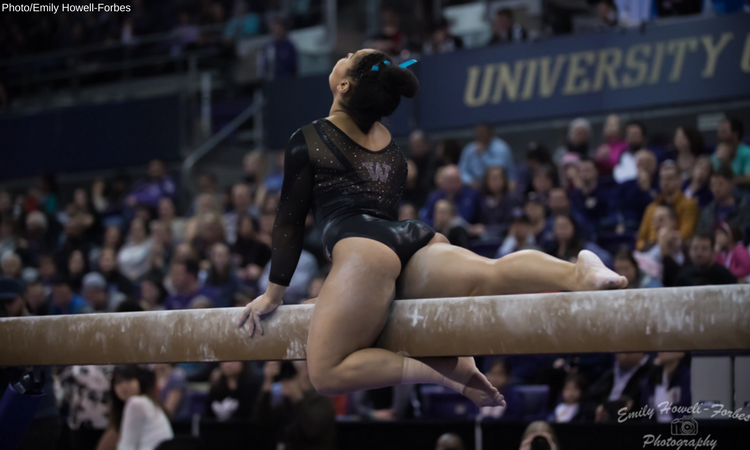 Washington hits the road this week to challenge Arizona State, after setting a season high of 197.000 at home last weekend. This dual is compelling this year, with the two teams having similar attainable marks on their best days and neither being particularly accustomed to top team status. It’s most likely that the fourth spot in the night session of Pac-12 Championship will go to one of this pair, and it’s a prize that both will be aiming for as we approach the latter half of the regular season. Both teams have performed their best at home this season, so Arizona State might have the advantage—but Washington carries the momentum into this meet while the Sun Devils have been in recovery mode after Nichelle Christopherson’s injury two weeks ago.

Of note: Christopherson’s exact injury hasn’t been confirmed but she has been spotted bearing weight on the ankle on social media, so ASU might not have to live without her for the whole season.

A scuffle is likely between Cairo Leonard-Baker and Hailey Burleson for the all around title; the two are separated by only two thousandths of a point in their season average. Million-time Pac-12 Freshman of the Week Leonard-Baker has the higher ceiling, but Burleson’s consistency is formidable, and she’s had a strong upward trajectory through the season, so it should be an interesting matchup.

Typical bars lineup for the Huskies. Commentators saying Arizona State is missing two key competitors today… one is presumably Christopherson, the other is Katelyn Lentz. Uncertain why.

ASU – K. SZAFRANSKI: Average FTY with a step back.

ASU – GINN: More amplitude on the FTY, but twisting onto the table. Flared out with a big step back.

UW – ROBERSON: Great pike Jaeger to overshoot, borderline on a HB handstand, flings out double layout and it’s underrotated with a step forward.

ASU – KUHM: One of her best! FTY with big amplitude and great direction, just a tiny hop.

UW – WASHINGTON: Full turn to the usual great Gienger, over on a HB handstand. Good bail, just a tiny bit of feet throughout here but so aggressive on handstands. Full turn to double back, little hop.

ASU – LEONARD-BAKER: Dynamic and powerful FTY with a midsize step. A bit off center and not quite extended – not her absolute best but still great.

UW – RILEY: Coming off a string of 9.9s. Toe on to Maloney to bail, beautiful. Borderline on a handstand on HB, beautiful double layout with a dead stick. Slowmo shows a weird catch on the Maloney – had to regrip with one hand but she worked through it beautifully.

ASU – WILSON: Great distance on FTY, a little off direction and piked down but great landing with just a tiny step.

UW – BURLESON: Beautiful half turn to Tkachev, great bail. Had a freak weak bars routine last week, but this one is great. Full turn to stuck double back! Totally in control.

Solid rotations on both sides, this is the event where injuries hurt ASU least – Christopherson hasn’t been a lineup vaulter and Lentz has typically been the drop score. Washington can make itself difficult to catch with some really good vault landings here.

Lentz is on crutches – still uncertain on the nature of that injury.

Here's your Vault Lineup for this afternoon! pic.twitter.com/LupkgRlaLO

Also here are some fuzzy confusing leo pics. They’re both old swirly ones. 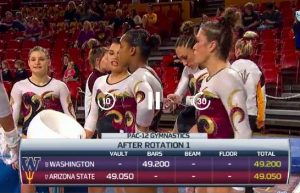 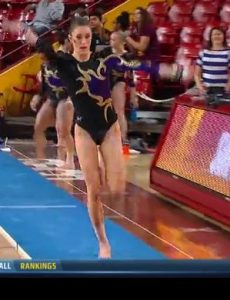 UW – COPIAK: Twisting onto the table but dynamic and powerful FTY, just a little hop back.

ASU – WILSON: Full turn to blind change to Jaeger with a bit of feet, great handstands. Nice bail, missed a handstand, full turn to beautiful double back with a step back.

UW – RILEY: Been sticking the past few weeks… just a tiny bit too tentative, weight is behind her and she runs back and sits it into the vault table mats.

ASU – K. SZAFRANSKI: Nice Ray, clear hip to bail with CRAZY legs but hangs onto it. Loses legs a bit on a full turn to double back that’s right on top of the bar but stuck.

ASU – HART: Blind 1/2 to Jaeger to overshoot, some legs on the downswing there. Double layout a bit starfished with a little hop.

ASU – A. SZAFRANSKI: Toe on to Maloney to Pak, great. Shy on a few handstands, double layout with a little step back. Good one!

UW – BURLESON: FTY, a little piked at the end but dead stick.

UW – ROBERSON: FTY, the usual, powerful and dynamic with a deep stick.

ASU home scoring started to kick in a little bit there. Which, isn’t it great that ASU is a team with home scoring these days?

So close at the midpoint. Washington heading into its strong events but ASU has home floor still to go, so it could go either way.

Hoffa just ran off the floor on a double pike. She did that in warm up last week and then again in competition – starting to get her confidence back on tumbling and has too much power.

ASU – LEONARD-BAKER: Great straddle to LOSO, just the normal legs on that. Beat to straddle 3/4 with an adjustment, flic loso is steady and beautiful. 3/2 dismount stuck! She’s cruising today.

ASU – UDOWITCH: Front aerial, little check. Front aerial-BHS – guess she had to reattempt the series. Switch to split with questionable split positions, full turn. Cat leap to kickover front is great. Side aerial, back full with a little hop.

UW – NELSON: Interesting that she’s stayed in this spot, it was previously Haley Roy’s. Double back with a good landing, front lay front full is great. Same leap series as Schaefer, switch ring direct tour jete 1/2. Double pike, the Huskies are so on top of these landings today!

ASU – KUHM: Flic lay is lovely, not great feel on the front aerial but makes it work. Switch to sheep with a little check. Double twist with a hop back.

SOME OF THE ASU FANS HAVE LITTLE FRENCH FLAGS TO WAVE. INCREDIBLE.

UW – ROBERSON: This routine is so much fun. Double full is awesome, beautiful Rudi-LOSO. Great leap series, double back, a little scoot back.

So far this is Washington’s best floor rotation of the year by my eye, though the scores aren’t happening yet.

UW – HOFFA: Stays in bounds on the double pike! Actually a great landing, just lunge out. Beautiful front lay front full. Tour jete 1/2 to wolf 1/1 is pretty, double back just a little underrotated but makes it work with a lunge forward.

She likes to say that her favorite skill is a full in – we haven’t seen it in college yet after two different injuries but she has more than sufficient power.

ASU – A. SZAFRANSKI: Front aerial to Korbut is great, side aerial with a little adjustment. Switch to split, way short of split positions. Full turn with a check – she’s a bit edgy today. Rulfova, underrotated in the air as usual but it’s still so cool.. Gainer full dismount with a bit of legs but stuck.

UW – WASHINGTON: Double back is great – always just hangs in the air on that pass. Switch side to Popa with phenomenal straddle positions, great performance too. Front lay front full is a bit iffy in the air but great landing, awesome double pike!

ASU – CALLIS: Triple series, adjusts and makes it work like a veteran. Good full turn with leg up that she pretends was on purpose, little adjustment on the leap series. Walkover to knees always makes me miss Kaytianna McMillan, love the scale choreo… and good side aerial to back full dismount!

ASU – BURLESON: Great control on double pike landing, 3/2 twist through double twist is beautiful, close to the line on her lunge back but stayed in bounds. Switch ring to wolf full, 2.5 twist so controlled. Could have stuck that, one of these days she’s going to.

Floor rotation couldn’t have been better for Washington – if anything those first two routines could have gotten a little higher. I counted two deductible landings in the whole rotation.

Great fight for Arizona State on beam, with some gymnasts that aren’t typical lineup contributors. Heading to home floor, this is not over.

By the way, a thing to watch – Washington is poised to make a BIG ranking jump with a good score here. Potentially as high as 9th with a 197.1 ish, which is totally doable on its best beam day.

Burleson and Leonard-Baker tied in the all around! Both headed into their strong events… iiiiinteresting.

UW – ROSE: Jump to split mount is stellar, as always. Front aerial – bhs is solid. Y turn to switch leap to beat jump! That combo is new, it’s how she got the tenth of bonus that she lost off the aerial-bhs combo devaluation. Cat leap to side aerial so solid, side aerial tuck back full and stuck. That’s her best routine – and that’s saying something because she literally never misses.

ASU – CALLIS: This routine is soooo much fun. She’s so compelling to watch. Great double pike, just a little scoot. 2.5 with a big step, narrowly stays in bounds. Switch ring to switch 1/2, split positions questionable… 3/2 to front lay is great.

UW – WASHINGTON: Flic loso with a little lean, great side aerial. Switch side, not attempting the combination there… and two straddle jumps to get her leap series. Front full dismount stuck!

High fived best friend Monica Riley a bit too hard and Riley falls off the edge of the mat, legendary.

UW – COPIAK: Great full turn, looks confident, flic layout is steady. Switch 1/2 to beat jump – no question on the connection there, it’s caused drama and judging conferences in the past. Beautiful side aerial, 3/2 twist with a little hop forward.

UW – GOINGS: This can be a 9.9, lean on triple series, beat jump to straddle 1/4, leg up on full turn. Lean on gainer LOSO. Side aerial back full, college stick.

Goings is a massive perfectionist who doesn’t tolerate wobbles, so expect angry revenge beam next week.

ASU – K. SZAFRANSKI: Flies back on double pike, just stays in bounds. Double back is underrotated with a step forward. Front full front lay, JUST BARELY inside the line.

UW – ROBERSON: Switch to straddle 1/4 is great, she’s so secure. Full turn, standing loso-loso like it’s NOTHING. Cartwheel to gainer full, moves one foot but that was the only error there. Spectacular beam routine, best of the night by my eye.

UW – BURLESON: Front aerial – bhs, momentum wasn’t perfectly forward on the front aerial but it turns into nothing. Side aerial to switch, again making the connection out of an imperfect entry. Straddle to straddle 1/4 is great, side aerial back full college stuck! What a rotation.