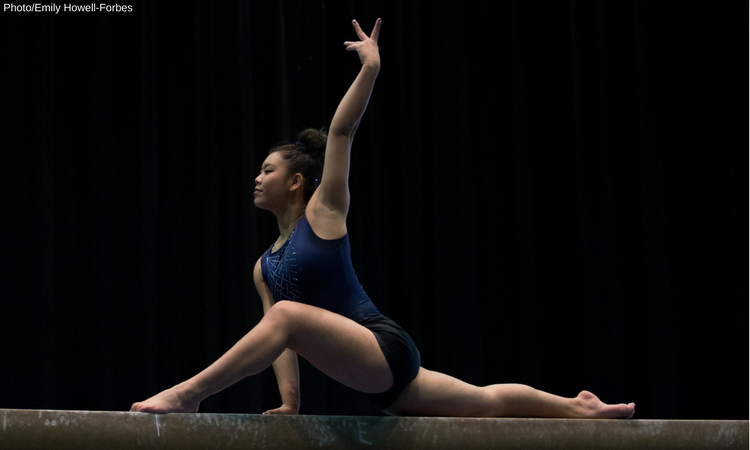 Four top thirty teams face off in Texas at the annual Metroplex Challenge. The LSU Tigers enter as the favorite, and with rivals Florida and Oklahoma scoring the first 198’s of the season in their dual yesterday, might be targeting that mark as well. UCLA has looked far steadier than its typical January self over the past few weeks, scoring its second 197 last weekend at Arizona, and with Madison Kocian and Stella Savvidou returning from injury the Bruins could be a strong rival for the Tigers. Washington is settling into its season with a comfortable mid-196 in its home opener last season, and has plenty of room to grow. Don’t rule NC State out either – its high score of 196.35 is actually higher than the Huskies’, and under new head coach Kim Landrus has plenty of experience coaching teams to hold pace with the best.

Or try this, which UCLA has heroically created so we don’t have to tolerate MSO.

They are DEAD serious about these intros. Arena is dark, spotlights and what looks like a disco ball? Rad.

Points of note: Meraz out of bars lineup, Kooyman in for UCLA. Good set of leos! Edney is warming up vault for LSU. Hallie Mossett is on site and wearing the most awesome overalls, and Brielle Nguyen has her hair in Peng-Peng space buns.

The hometown girl, @ReagzC, showing off our leotard for tonight! pic.twitter.com/8yVfRWslYN

I’ll focus on LSU and UCLA and get as much of the others as I can.

UCLA – HONEST: Usual Tkachev, half turn to straddle back good, full out dismount with a step forward.

UW – WASHINGTON: Steady, no leap connection out of her switch side – does two straddles instead. Step forward on front 1/1 dismount.

UCLA – DENNIS: Good Maloney to bail, DLO with hop back.

UCLA – OHASHI: Something weird on high bar, has to do a bunch of direction changes.

UW – GOINGS: She’s a pressure gymnast, definitely someone you can rely on after a fall. Steady on triple series. Side aerial back full with a tiny foot scoot.

UCLA – LEE: Great Ray and Bhardwaj, bounce back on the DLO.

UW – COPIAK: Small adjustment on series. Cat leap switch 1/2 – good after she missed her dance series last week. 3/2, up on her toes but holds the stick.

UCLA – KOOYMAN: Interesting choice for her to anchor, it might have been to take the pressure off but after Ohashi’s error that’s not how things panned out. Kocian up by the bars looking like she wants to do it instead. Maloney to Pak with a bit of leg sep, near stick on tuck full in dismount! That’ll do it.

Not anyone’s absolute best day but plenty of quality routines. Scoring is a bit irregular but not aggressively too far in one direction so far

LSU – DURANTE: Usual routine, clean with a hop on dismount.

UW – SCHAEFER: One of her best, controlled on every landing. Sticks around to give a pep talk to Roy up next.

UCLA – NGUYEN: Too many things going on but she hit and it was good.

LSU – HAMBRICK: Great! Near stick on tuck full in dismount.

LSU – HARROLD: A little arch on the Zuchold but nothing crazy, Comes apart on a handstand and drops down to support, they’ll need to drop that. Landed the dismount I think.

UW – ROY: UW’s landings are seriously improved this week. Great through and I didn’t see any leap problems, which are usually the only vulnerability of this routine.

UW – ROBERSON: Rudi-LOSO is great, a little adjustment on the landing. Great double back.

LSU – FINNEGAN: Nice Ray, a bit of a foot flicker which is unlike her. Over on one handstand. Double layout, college stick.

Macadaeg in exo for LSU. Full turn to low Tkachev, Pak with leg sep. Over on a handstand on HB, double layout with step back.

UW – WASHINGTON: Death stare before routine is my life. Double back with the kind of controlled lunge that you’re actually supposed to do and most people don’t. Nailed that one and she’s thrilled.

UCLA – LEE: Solid on pikeout thing, really close to the end of the beam… Double turn to beat to split, great. Side aerial back full, another stick! One of her best.

By the way UCLA just flipped out I think she got a 10 and I’m fine with it. Good for Maya to work through that,

Meraz in exo for UCLA, big leg up check on series and she’s off.

UW – BURLESON: Beautiful double pike, I love how she turns out on her landings and her lunges are actually to fourth position. 2.5, this close to sticking and then has to adjust a bit awkwardly when she realizes she didn’t. Really, really good floor rotation for the Huskies.

Riley in exo for UW, hometown girl! This is about the third time they’ve screwed up and played the wrong music.

Bruins with a narrow lead after their exceptional beam showing – they’ll need a really strong floor rotation here if they want to maintain it, UCLA vault doesn’t match up well with LSU floor in the fourth rotation.

Sorry about the lack of NC State – internet isn’t sustaining four streams. Looking on pace for a strong score after two.

UW – RILEY: Stuck Y 1/2! Vault has been a weakness in the past for the Huskies but this year they’ve been really aggressive with landings and it’s paying off.

UCLA – KRAMER: Nailed the 2/1 to punch front, this routine is great. Little hop after Rudi-straddle.

UCLA – ROSS: Near stick on double back, has to step forward. Love the Ferrari to death. Perfect landing on 3/2 to front lay. She smiles on floor now!

UW – ROBERSON: (I missed Burleson) Big FTY with pace back.

Stream froze and I missed some amount of Campbell, she did okay but shaky on leap series and had to add another one. Hop on dismount.

UCLA – OHASHI: The double layout is so good. Good on leap series, nailed the combo pass.

UCLA – DENNIS Hasn’t quite hit potential yet on this one. Awkward landing on double arabian. Has to stagger back to hang onto it. Leaps amazing. She can be SO GOOD and we’re gonna see it soon just… not quite yet.

LSU – FINNEGAN: Single wolf, nice and steady. Flic loso with knees and feet – what’s happening?? what parallel universe am I in? Great switch 1/2 series, side somi. Hop forward on side aerial back full dismount.

UCLA – TRATZ: Legit my favorite floor routine in the NCAA this year. Great full in, awesome leap series and stick on the double back. This is going 10 someday soon.

Honest in exo for UCLA, no Savvidou this week.

Will come right down to the wire for the title. Looks like NC State had a thing on bars that will unfortunately take it out of contention with UW.

UCLA – OHASHI: Big FTY and stuck. Oh huh, that’s a thing she can do.

LSU – KIRBY: Great start, nice in the air on the Rudi.

UCLA – DENNIS: Didn’t see it but by the yell it was good.

UCLA – ROSS: FTY and another stick. Exactly what they need to do to hold out ahead of LSU.

LSU – DESIDERIO: A little crunchy on DLO. Underrotated on double back combo pass and had to step forward.

UCLA – TRATZ: Biiiig FTY, airy and near stick. Whoa. Bruins are on fire.

UCLA – HALL: Y3/2 and dead stick. Holy UCLA, what is happening. Running away with this. Best vault of the meet hands down.

Kramer in exo, LAID OUT 3/2 with a cross step back.

Unbelievable, UCLA has won this. Just the best possible vault rotation out of absolutely nowhere after the struggles they’ve had this season. In five years I don’t think I’ve ever seen UCLA vault like that. This is why we watch… any meet, any day magic can happen.

LSU – EDNEY: The tumblinggggg. Not her absolute best routine, but stick crown and a scream from Gnat on the sidelines.

LSU – FINNEGAN: Not the most controlled step out of her 2.5 but so lovely.

UW – BURLESON: Lovely Tkachev, perfect bail. Fights for the stick and gets it.

LSU – HAMBRICK: Very piked in the second salto of her DLO as usual, but a stick. Whoa, the height on her 2.5 punch front was wild. Very nice finish, good controlled landing.

I will be thinking about that UCLA vault rotation for a while. Just so far beyond anything we’ve seen from the Bruins so far this season… or most of the last four… on that apparatus and honestly some of the scores were a bit low, Tratz in particular. They needed to be exceptional to stay ahead of LSU and they were. Bars is still a bit of a process but they’re now in shooting range of a 198… with a marquee home meet next weekend, be on the lookout for that.

LSU lost pace a little after a slightly shaky beam rotation and a handful of lukewarm routines from freshmen, but still a good day for a solid 197. Ruby Harrold has been hot and cold this season; missing her hurts the Tigers, but Edney back in the all around with health concerns hopefully resolved is great to see.