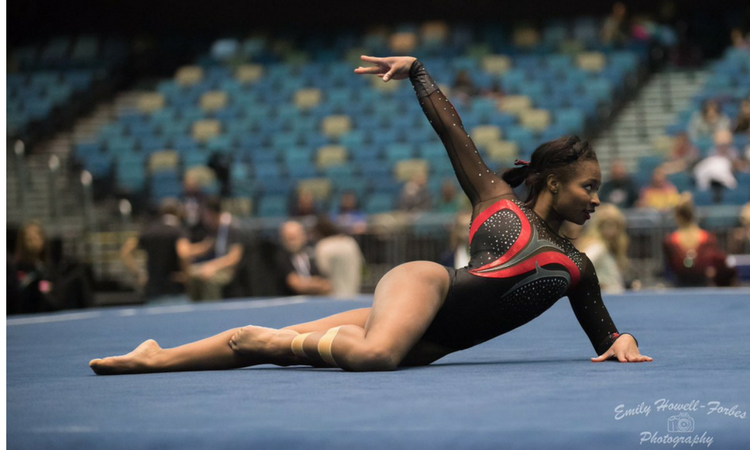 Pac-12 rivals Stanford and Oregon State have performed fairly evenly thus far this season, so this one could be an exciting battle. For Oregon State, which has shown the higher peak score, today is a question of consistency; as the Beavers work on introducing underclassmen into their lineups, the veterans are under a little pressure to perform steadily. Sabrina Gill in particular, is developing into a standout all arounder, and McKenna Singley registered an all around career high last week at Utah.

Stanford is continuing to struggle for depth on bars, and to hold pace with Oregon State it will need to minimize 9.6-9.7 scores. However, senior star Elizabeth Price is performing as well as she ever has, and if Stanford’s talented freshmen can remain consistent in mid-lineup spots, Price’s anchor routines will lead them to competitive team totals.

OSU wearing this one: 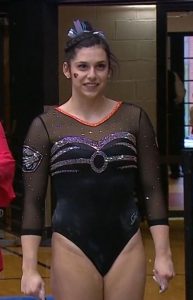 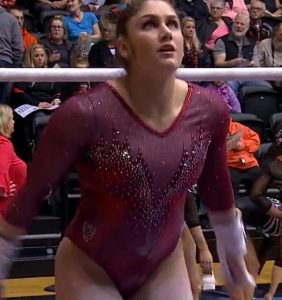 Both are wearing teal ribbons today.

Sam Peszek is on commentary. As usual, I didn’t pay attention when they said the male commentator’s name.

OSU – DAVIS: Her vault debut. Big power, piked down but she really didn’t need to. Hop back. The silver hair is immensely cool.

OSU – GILL: FTY, a little leg sep on the table, hop in place.

To me these Stanford bars scores are a little high.

STANFORD – BRYANT: Great Tkachev, gorgeous Pak. Lovely DLO, hop back. That one was a HUGE improvement on the others.

OSU – DESSAINTS: Apparently fell twice in warm up. 1.5, a little crunchy but college stuck, just the hop to salute.

STANFORD – PRICE: Maloney to clear hip, Church to bail just about her best. Maybe a little shy on a handstand there? DLO stuck with the usual flexed feet but less leg sep than we’ve seen.

OSU – JACOBSEN: Off direction, big hop back and to the side on the Kaz.

Interesting rotation. OSU could have been better on vault – there’s some landing work to do, and having a Yanish 10.0 start would do wonders. (Apparently Gill is also working on one, but I’m less optimistic about that.) For Stanford I thought Flam and Navarro’s scores on bars could have gone lower, with significant and unmissable breaks on their high-to-low transitions. Bryant didn’t seem to get credit for how much better she was than the other three freshmen.

STANFORD – COLE: Good FTY, piked down and with a wide stance on landing but stuck!

OSU – KHAMEDOOST: She’s been competing out of her skin this season and this one is the same. Great handstands and leg form, a little leg sep in her double layout dismount but a great stick.

STANFORD – NAVARRO: Twisting onto the table on her FTY, makes it around and lands with a hop in place but not great amplitude.

OSU – MCP: Great handstands, a tiny bit over on one, lovely Jaeger. Beautiful DLO and stuck dead. Good one!

According to Sam, OSU does a drill where they stand on the high bar and flip off backward to practice dismounts. Sounds terrifying but she thinks it’s where these sticks are coming from.

OSU – SINGLEY: She’s been sick this week, so not all her events. Good full turn to Tkachev, a tiny bit crooked on bail but great leg form. Full turn to double back, tiiiiniest shuffle. Tiny enough that I wouldn’t be mad if it was called a stick.

OSU – MINYARD: Whoa, great handstand on the hop change, before Jaeger to overshoot. Great so far. Double layout, underrotated with a step forward, could have put her knee down.

OSU – JACOBSEN: Good amplitude on Tkachev to overshoot. College stuck half turn to double front dismount, I always love her commitment to keeping her legs together on that dismount even if it doesn’t happen all the way around. 9.9!

STANFORD – H. HOFFMAN: Interesting choice for her to anchor. Yurchenko tuck, rebound back and can’t save it. She wasn’t straight on the table. I wonder if that was effectively an exhibition.

OSU – GILL: Toe on to Maloney to Pak, slow but easy and airy. Tiny bit over on one handstand, double layout, a bit of leg sep in the air but stuck.

This is interesting, the two teams received the same scores on bars… OSU’s rotation was far, far superior. I’m not totally sure they understand how homescoring works.

Also I’m obsessed with corner of eye rhinestones, and Stanford’s today are great.

OSU – SINGLEY: Nice double stag jump, good thru acro series. Kickover front. Cartwheel to gainer full, tiniest shuffle. Apparently yesterday was the first time all week that she trained, so this is not half bad.

STANFORD – COLE: The Britney routine! 2.5 punch front, lands OOB and way underrotated, stumble back in – the twisting was so beautiful too. Nice punch Rudi. I’m having much more fun watching Stanford floor this year than I have the past few.

OSU – DAVIS: Her hair is just so cool, I can’t understate it. Cartwheel over to front support beam mount. Front aerial, might have intended a connection. Tries a BHS-LOSO, off. Beat jump to switch 1/2, big check. Gainer front full.

That puts some pressure on the rest of the lineup.

STANFORD – FLAM: Double arabian, way too deep and rebounds forward onto her stomach and out of bounds. That’s an ugly fall, didn’t see but she risked hitting her head on the wood gym floor. Front pike through double pike, low but saves it. Straddle leap series is great. Double pike, solid. Great recovery.

Okay, in replay we can see that she didn’t hit her head. That’s something.

OSU – LAZARO: First competitive routine! BHS-LOSO, tidy and pretty. Switch – straddle 3/4. Full turn. Can tell she’s the tiniest bit nervous but she’s handling it. Side aerial back full, stuck cold. Team screaming for that one! Following up the miss by Davis is a lot of pressure and she did great. 9.9 wow!!!

STANFORD – BRYANT: Double layout, step back… oh wow, if she’d dropped her heel she would have gone out of bounds, but she pushes into forced arch instead and saves it. Bit of an odd rebound out of her double pike but it’s fine. Open double back, again slightly awkward landing. She has such competitive instincts.

STANFORD – PRICE: Double layout, stuck with a tiny foot shuffle WOW. Front tuck thru double back, hop forward. Switch side Popa, hop. Double pike, maybe a little underrotated? with a step forward. Not her absolute best but I mean, it’s Ebee and she hit.

Kaitlyn Yanish didn’t do beam, interestingly. Not sure if that’s a permanent choice or if they just wanted to give Lazaro a shot.

And Maela Lazaro, guys. Check your trade pools, she is happening.

STANFORD – FITZGERALD: Has struggled a bit in the first few weeks. Whoa, super awkward 2ft front aerial landing but hangs on. Front aerial back tuck, slow connection. 3/2 twist with step back. Got through and that’s what they needed.

OSU – MACK: Has looked great in exhibition, glad she gets a shot at collegiate debut. Got the little Hunger Games whistle thing in her routine. Big sis Nuriya is a junior at Kent State. Great double pike, little rebound over her Rudi. Isis Lowery coaching from the corner <3 closes with a good front lay front full, great debut!

STANFORD – COLE: Big leg up check on acro series and she’s off, never really had a chance to save that. Front aerial, little check – did she intend a connection? Double full dismount, good.

OSU – FORCE: Has been anchoring, pulled back to give Yanish the anchor spot which I think is a good call. Double pike, good landing! FHS front lay front full, good. This is her best collegiate routine so far. Double back, great landing. So good! 9.9 and I’m totally fine with it.

I wonder who’s going to be pulled next week to let Singley back in. This has become such a competitive lineup.

STANFORD – TAI: Flic loso flic… way off line, falls. She could have stopped at the loso and been fine. 3/2 twist with a step back.

OSU – JACOBSEN: Awesome landings early on, great energy in her dance. Closes with a slightly awkward Rudi landing but won’t hurt that badly. The Beavers have such momentum at this point.

STANFORD – PRICE: The story of her career… everything’s going wrong for Stanford, and you look up, and there’s Ebee. Front aerial. Flic layout, no question. Nice full turn, switch split, double pike with leg sep and a step back. Exactly what they needed.

OSU – GILL: Her competition persona is a little scary and very awesome. A little awkward on a double pike, then 3/2 front lay, landed out of bounds. Great on the double back. They can drop that.

STANFORD – NAVARRO: Jump to split. Flic loso, beautiful with a smile. Front aerial, little adjustment. Switch split. Double back dismount with a hop. Hasn’t fallen yet in her collegiate career.

OSU – LOWERY: The Aussie can bring the house down. Double pike, I love how aggressively she lands. Good Rudi, performance quality is so high, front full front lay and amazing! Good one.

STANFORD – BRYANT: So poised, I’m obsessed. Full turn, flic loso with tons of air. Aggressive arm placement is saving her from a lot of trouble. Great punch front, flic flic double back with a hop in place, so powerful.

OSU – YANISH: Closing it out. They’re quoting us again!! Double layout, beautiful. Front full front lay, clean and great. Switch side popa straight into choreo. Double back, a little shuffle back. Having that routine anchor is definitely a good choice.

What a great day for Oregon State, with little room for improvement especially in vault landings. With Singley back next week, be on 197 watch.

I honestly did not expect the Beavers to be anywhere near this together at this point with the seniors they lost last year, but it’s hard not to be thrilled for them. So many gymnasts who were early lineup or on the sidelines in previous years are living up to their potential and getting nationally competitive scores to keep the team at last year’s level. It’s so exciting to watch.

We got a better look today at Stanford’s path to postseason. Vault and floor were great, and bars scored much better than we’ve seen so far this season. Getting a sixth routine on bars would really be great… but if the Cardinal cuts out the falls on beam we could get very competitive totals.

Check back in soon to follow along with our liveblog of the Metroplex Challenge!