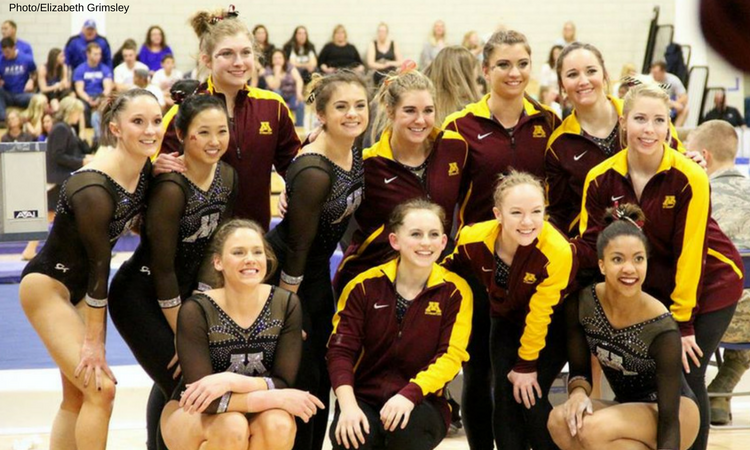 The Minnesota Golden Gophers boast one of the most exciting freshman classes in the country, and many gymnastics fans have picked them as a team potentially on the rise in 2018. The Gophers are on a bye in week one of the collegiate season, but in lieu of a competitive meet, they are holding an open scored intrasquad.

Two Gophers—freshman Lexy Ramler and senior Hannah Hitchcock—were spotlighted in the Big Ten Network’s annual Gymnasts to Watch list. However, all three freshmen have the potential to be immediate stars, especially Ona Loper, whose Yurchenko one and a half scored well in level 10 and has looked great in training. Sophomore specialists Paige Williams and Ivy Lu also had top scores in their first season as Gophers, and as they settle into their collegiate careers, they could develop into stars. All arounder Ciara Gardner also returns for her senior year and with a 2017 national ranking of 34th, should not be overlooked.

Fans should note that scores at Minnesota’s intrasquad are frequently lower than what it scores competitively—so don’t panic if the team total is a point or two off what you’d expect! We’ll do our best to give a realistic idea of how the lineups might look in competition next week.

The meet begins at 7:30 p.m. ET/4:30 p.m. PT and will be streamed by BTN+ (also available with a FloPro membership.) Live scores can be found here.

**For clarity, the livescore lists two teams but they’re not competing that way! They’re just showing long lineups and not splitting it up, so the first six scores are getting put into one team and everyone after that is listed under the other one.

The 2018 season is here! #LoveTheBattle

(The intrasquad will not be limited to six gymnasts on each event! So, in this case, we’re not immediately assuming that Ramler is an alternate.)

According to commentators (and alumni) Rahon and Abernathy, the Gophers will have a new leotard tonight! I’ll try and screenshot that for you.

MONTGOMERY: Yurchenko layout, good amplitude with a step back.

Not sure on the reasoning behind these downgrades – commentators also seem surprised. Likely just to rest the gymnasts.

HITCHCOCK: BIG yurchenko full, large hop back. Block was quite far back and off to one side on the table, but she made it work. Lots of distance. 9.625… this is what I told you about the scores going low.

LOPER: No 3/2 today, just a yurchenko full but really solid. Guess we’ll have to wait to see the big one.

RAMLER: Yurchenko full, really controlled. Hop back but she could have stuck it and probably will soon. I thought I saw a bit of body position on the block but we didn’t get a replay, if it was there it was minimal.

No Gardner, I’m surprised by that. 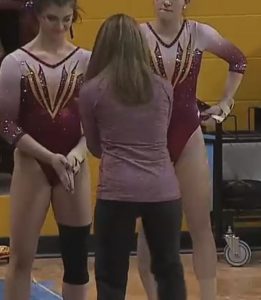 I’m a sucker for ombre arms, so I like it.

Lu looks exquisite in touch. She’s struggled with consistency but can be a huge asset. Ramler showed a van Leeuwen with crazy leg form.

Next up we will have nine #Gophers competing on bars:

BETTS: Ray, awkward catch, did she catch her foot? Bail, full turn to double back and STUCK.

The Ray is a new upgrade from a Tkachev last season!

TAYLOR: Hop to grip change, bail, crazy legs. Full turn to double back with leg sep. She didn’t compete last season – this is her first routine in front of the Minnesota crowd!

LOPER: Maloney to Pak, gorgeous legs. Toe on to tuck flyaway dismount. Might be resting the old ankle injury, but commentators expect her to be doing full difficulty next week.

ROWLAND: Stupid high Jaeger to overshoot. Free hip to toe on, front tuck. Ran out of the landing. Awesome composition and great toe point, that one was great to watch.

QUAGLIA: Lead off last year. A little over on her first handstand today. Pike jaeger to overshoot, a little bit of foot form throughout. Full turn to double back with small hop.

UNG: Half turn to straddle Jaeger, a little too far and can’t catch it. Full turn to bail, slipped one hand and collapses onto the bar. As disappointing as this is, her technique and handstands are fantastic and I hope she gets another shot. Double layout, too close to the bar and onto her knees.

HITCHCOCK: Free hip to gienger, gorgeous, only the tiniest leg sep. Bail, great handstand. Half in half out stuck cold! She’s fantastic so far today.

RAMLER: Maloney-Pak, stunning. van Leeuwen, loses her legs in the air… and a toe on to stuck tuck full in! That will score very, very well, though it’ll be interesting to see if she retains the van Leeuwen since her start value doesn’t need it. 9.85, there we go!

For anyone not watching, suffice to say that these routines are WAY better than the scores indicate. If Loper adds her dismount back and everyone else keeps sticking like this, the Gophers are in very very good shape on bars. I’d hope for 49.3-49.4 on a regular basis.

Still no Ciara Gardner. Paige Williams hasn’t competed yet, but is on site.

Tonight is flying by! Just two events left. Up next on beam:

CUTLER: BHS+LOSO, super solid. Cat leap to side aerial. Split 3/4, gainer pike near stick. That’s a great routine, it sounds like the plan is for her to lead off.

MONTGOMERY: BHS+LOSO, a bit of legs and feet and a leg up check. Beat jump – straddle 1/2 – back tuck, that’s a cool combo! Full turn. 3/2 twist, fought and held the stick!

BETTS: Apparently this is her beam debut for the Gophers! Split to split 3/4. One ankle is heavily taped…. BHS+LOSO, tiniest check. Good full turn. Side aerial, hips out of line but saved it. Hitch kick to gainer full dismount with a hop.

KORLIN-DOWNS: Recovering from a “couple of ACL tears.” As a junior, she hasn’t competed in college yet. Casual. Side aerial-bhs, fantastic. Beat jump to split to split 3/4. Full turn. Cat leap to gainer layout. She’ll want to add a full twist on the dismount, but how great to have made it to this point.

Score flashed shows a 9.8 SV, which is likely due to the dismount. But it could be she’s holding off on the full difficulty for today.

HUEBERT: Some fantastic gym hair. BHS+LOSO… all the Gophers are so solid on their series. Cat leap to switch side. Hitch kick to gainer layout full, tiniest step.

This has been a fantastic rotation so far.

LOPER: Lovely mount. Slightly hesitant landing her series. Beautiful full turn, front kickover to sissone. Leap series, dismounts with a round off layout. Again, likely resting the landing but with full difficulty this should be a weekly routine.

LU: An ankle injury held her back on beam last year but she can be so beautiful here. BHS+LOSO, split+straddle 1/4. Double turn, leg up but confident! Side somi, almost pretty. Cartwheel to gainer layout 1/1, flared out and stuck. So lovely, hopefully she can stay healthy and contribute weekly here.

UNG: After a tough go on bars, her beam music is Fight Song. Aww. Super confident BHS+LOSO, full turn. Cat leap to switch side. Hitch kick to side aerial, she is so steady here. BHS to gainer full dismount, stuck. Couldn’t have been much better – what resilience from her.

RAMLER: Choreo showing off her fantastic toe point. Full turn, BHS+LOSO. Front aerial to wolf – a little crooked but adjusts easily. Split to ring jump! So unique and pretty. Side aerial to back full, bounce on her toes.

Judges finally breaking out the 9.8s for the last three routines. Which is good, because they were outstanding.

Such a clean beam rotation! No falls, lots of very very pretty work. The only concern is the two downgraded dismounts from Loper and Korlin-Downs, but there’s a good chance we’ll see the full difficulty next week.

At the beginning of the fall you all said you were most excited to see the #Gophers on floor this season. Here they come!

Still no Gardner or Williams. No clue why.

BETTS: Double back, spotted. Bounced out of the tuck 3/2 in her leap pass. This routine is very dramatic! Punch front full to layout. Last pass is a Rudi, and then throws an illusion turn in! That’s such a cool skill.

MONTGOMERY: Timer first pass. Switch side to Popa. Second pass is also a timer, third is a front layout front full! Her performance could have reflected her high energy music better, but with more practice of college floor I’m sure she’ll get into it! There was a really fun dive roll in the middle, too.

HUEBERT: Immediately drawn in by the performance quality of this one. Timer passes again, switch side to Popa leap pass. Front layout front full, a little short but makes it work. 3/2 twist to front tuck! Apparently planning to upgrade to a front layout.

DEMUSE: Still working back to full sets, likely won’t have full difficulty ready for a while. Timer pass but showed a whip in the middle, which is always fun! Split jump full to straddle full. Dramatic music again, and her quality of movement is really high, it’ll be great fun to watch once she’s ready.

CUTLER: Super fun music and she knows how to sell it. Front layout front full. Tour jete 1/2 to split 1/1 jump. Great Rudi. The facial expressions in this one are phenomenal. Double back, spotted but looks solid. That one could definitely go high.

LOPER: This one will be great – very cool music, unique choreography, and she looks a little shy  but you can see the potential of a great performer. Just layouts today, but great leaps and a beautiful Y turn.

RAMLER: Creepy intense music that I feel like I recognize but can’t ID… it might be Lindsey Stirling. Opens with a ring 1/1 jump, double pike slightly overpowered. 3/2 twist to front full. Switch ring to switch 1/2, double tuck spotted. Awesome ending pose. That one will be an instant hit. 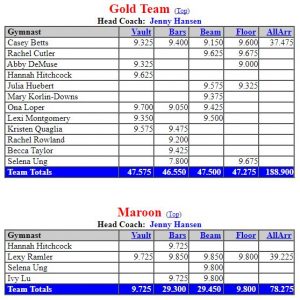 The Gophers didn’t show full difficulty on many routines today, but what they did looked fantastic. The scores should absolutely not be taken as an indicator of the state of the team – there was only one missed routine out of thirty two, many gymnasts performed timer routines, and most 9.6+ routines could score at least a tenth higher in competition.

The biggest concern for the Gophers is the absence of Paige Williams from her signature events (though she was in attendance) and Ciara Gardner from the all around. However, Lexy Ramler (who won the all around and all four events, finishing with a total of 39.225) and Ona Loper should become immediate all around stars, and Ivy Lu looked outstanding on her two events today.

It’s hard to judge floor and vault today,with so much difficulty missing. Bars and beam looked outstanding, though. If the Gophers continue performing at this level, they ought to be able to produce weekly scores in the 196 range, and I wouldn’t be surprised to see them return to the top 20 this year.

Thanks for following along! For more live gymnastics action, keep checking our schedule for streams, live stats, and liveblogs.