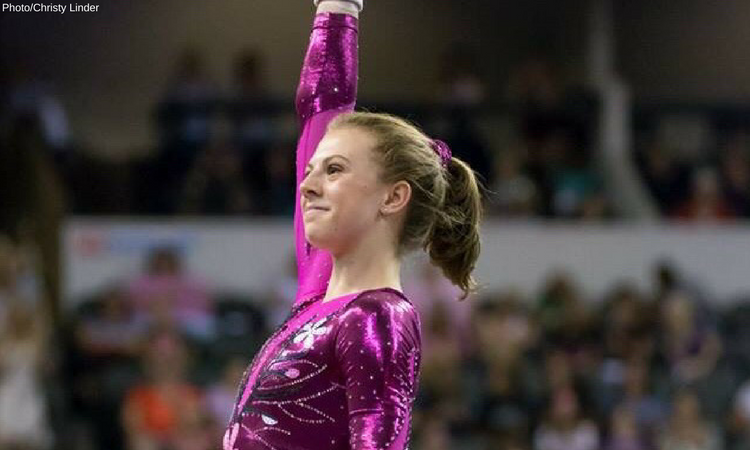 Kylie Dickson has been in and out of the gymnastics news cycle since 2015, when she and her AOGC teammate Alaina Kwan qualified for elite then failed to achieve the qualifying score necessary to advance to the P&G championships. Dickson and Kwan then represented Belarus, despite not having any connections to the country, at the 2015 World Championships in Glasgow and with the former continuing on to the 2016 Olympics.

In 2015, two Belarusian gymnasts, Sviatlana Lifenka and Valeryia Tsekhmistrenka, were listed on the world championship nominative roster before Dickson and Kwan ultimately replaced them. The American pair gave interviews to International Gymnast at the time. In the interview, Dickson says, “If they want to be an elite and represent Belarus, they definitely can. You just have to push through the hard days and the good days. Give it a lot of dedication and time and patience.”

Two years later, as Dickson begins her collegiate career at Alabama, the gymnastics community has rushed to decry her anew for the Belarus situation, rather than focusing on the work she has shown throughout the preseason.

It’s time to let Dickson off the hook.

What happened to the Belarusian athletes was unfair and tinged with an air of Western white saviorism, but the gymnastics community is holding the wrong parties accountable.

Dickson, just 16 years old when she competed in Glasgow and 17 in Rio, was by no means a child, but also wasn’t a fully mature adult. Artur Akopyan, Galina Marinova and Nellie Kim, the central figures in this saga, are.

The AOGC head coaches approached the President of the FIG Women’s Technical Committee, Kim, directly, according to USA Today’s Rachel Axon. Akopyan and Marinova are longstanding figures in the gymnastics community. At AOGC, they coached McKayla Maroney, Mattie Larson and Hallie Mossett, among other standout high-level gymnasts.

In the IG interview, Dickson says, “Galina and Artur had approached Alaina and me about competing for Belarus. At first we were like, ‘Oh, OK…’ But they were really serious about it, that they needed us to send in passport pictures and other things.” Dickson’s account suggests that after raising the idea of competing for Belarus, Akopyan and Marinova continued to push Dickson and Kwan along in the process of obtaining citizenship.

In 2016, Maroney gave a frank interview with Gymcastic, outlining the physical and mental abuse she endured at the elite level. She says, “I started to learn that sometimes [Akopyan and Marinova] really weren’t helping me in a mental way… But just like mentally, they just messed me up. Like so badly.”

It is not anyone’s place to speculate whether Dickson experienced similar abuse, but Maroney’s account suggests that the culture at AOGC was such that when Akopyan and Marinova made the decision that their athletes would compete for Belarus, there was not room to argue.

Additionally, the gymnasts did not receive any pushback from their families. Since they were minors, it’s logical the decision to compete for another country included Dickson and Kwan’s parents. In a FloGymnastics interview in Glasgow, Dickson says that her family was “super excited” at the prospect of international competition.

Meanwhile, Kim, in addition to her role leading the FIG technical committee, is the Vice President of the Belarusian Gymnastics Federation and a former Soviet gymnast who identifies as Belarusian.

Kim has a history of involvement in gymnastics scandals. After her gymnastics career ended, she became a Brevet judge. Dvora Meyers states that her judging license was suspended in 1990 on suspicion of favoring Soviet gymnasts. She reemerged as a judge at the 1992 Barcelona Olympics. Kim also led the technical committee in the decision to end the perfect 10 and move to the open ended scoring system, and has been known to summarily name skills after herself in the Code of Points.

In 2002, Belarus passed a citizenship law that allows applicants to bypass the traditional requirements—such as living in Belarus for a number of years before being granted citizenship—if the applicant will make significant contributions to Belarus’ development. This loophole is how Dickson and Kwan were able to obtain dual citizenship without ever visiting the country.

It is reasonable to assume Kim had a hand in arguing that the AOGC teenagers would benefit Belarus enough to push the government to grant them expedited citizenship. Once it was obtained, Dickson and Kwan were able to change their credentials to Belarus.

In defending her decisions, Kim, referring to the fact that FIG has historically allowed gymnasts to change their nationality, said, “It’s not new. We have our rules in FIG, and whatever happened, happened.” Of course, in other cases, the gymnasts usually had reasonable ties to their new nation.

Where does this two-year old controversy leave us now?

Dickson has earned her spot on the Alabama roster. She committed to compete for the Crimson Tide in 2014, long before ever competing for Belarus, and her gymnastics is NCAA-caliber. Her double twisting Yurchenko averaged a 9.695 in Level 10 in 2017, and she scored a 38.1 at the Region 1 championships. She later went on to place 19th in the all around at J.O. nationals. Even during preseason in Tuscaloosa, Dickson has shown star qualities on bars in particular and is expected to immediately break into the vault and bars lineups come January.

Was the decision for Dickson and Kwan to compete for Belarus debatable at best? Yes. Did they continue to show a lack of understanding of why the decision was questionable? Yes. Should Dickson be held solely accountable, and should it be used it to bash her during her NCAA career? No.

The gymnastics community should question AOGC and Kim’s motives and push for changes in FIG that will not allow something like this to happen again. However, a 16-year-old gymnast shouldn’t be held accountable for the bureaucracy that brought her to the Olympics. If the gymnastics community has learned anything through the trials of the past year, it should be that we must have sympathy and understanding for gymnasts while questioning the complicated, often corrupt, institutions they are subject to.

Would you have been able to turn down your Olympic dream as a teenager when everyone in your life—your coaches, your family, FIG, another nation—concocted the plan and told you it was a good idea? I don’t think I would have.

Dickson has had her day in the court of public opinion and has, we can hope, learned something from the uproar. She should now be free to enjoy her NCAA career. Because as head coach Dana Duckworth once said, “You are beautiful; you are lovely.” And Dickson should be able to go out there and enjoy this.