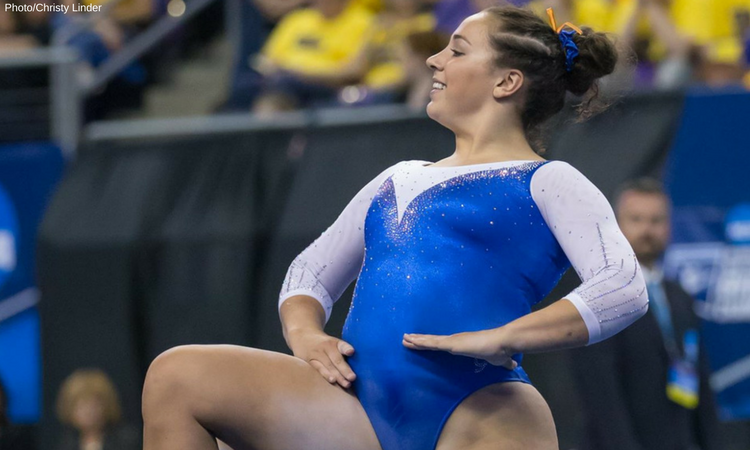 You didn’t think the NACGC/W Preseason Coaches Poll could be released without us having some sort of opinion about the rankings, did you? While we think the coaches got it right for the most part, we have a couple of changes to the top 36 we’d like to address. For your benefit, we included the team’s real rankings in parenthesis, or see the full preseason coaches poll for yourself.

The main shake up in our rankings comes with the Gators sitting atop the standings. And while the two-time defending champs and Florida are neck and neck, we went with the latter on top for one main reason: Florida lost zero postseason routines while the Sooners are without the likes of Chayse Capps, McKenzie Wofford, Charity Jones and more in 2018. Plus, the Gators bring in a class of star freshmen that includes Alyssa Baumann, Jazmyn Foberg and Megan Skaggs.

The next big change in our rankings comes in the 4-5-6 rankings. We were surprised to see, despite the team underperforming in recent years, UCLA sitting at sixth in the coaches poll—and a good ways back in the points to boot. A team with Kyla Ross, Peng-Peng Lee, Nia Dennis and Katelyn Ohashi—not to mention the currently injured Madison Kocian—should be ranked at least fourth. We moved Alabama down to No. 5 as its big freshman draw, Bailei Key, hasn’t done much this fall and only showed an incomplete bar routine and an out-of-lineup beam routine at the recent Crimson & White preview. Finally, we dropped Utah down to No. 6 due to the loss of all arounder Baely Rowe, Sabrina Schwab and only bringing in a freshman class of two and a half (the final member will arrive in January).

The low teen teams were difficult for us to rank. We went back and forth with Boise State, Auburn, Oregon State, Washington and Georgia and what order they should fall but ultimately settled for the order above. We felt Boise State has a strong team this year and has the potential to finally make it to nationals while Auburn has also looked strong in preseason training but Oregon State lost too many stellar routines to stay in that top 12. Washington and Georgia stayed in their place due to recent injuries causing the teams to be depleted to start the season.

When the coaches poll initially came out, we honed in on Minnesota and how it seemed too low in the rankings, so we moved the Gophers up a spot, mainly due to the star power Lexy Ramler and even Ona Loper and Lexi Montgomery will bring to St. Paul in 2018. Meanwhile, West Virginia also moved up a position because, despite losing Tiara Wright to injury, it still has national qualifier Zaakira Muhammad and Kirah Koskinski. Arizona dropped two positions after losing not only Skyler Sheppard and its seniors but also Tabitha Yim to Stanford.

Other teams we will be keeping an eye on in 2018 will be N.C. State under new head coach Kim Landrus and Michigan State with new freshman phenom Lea Mitchell. What does your preseason top 36 look like?