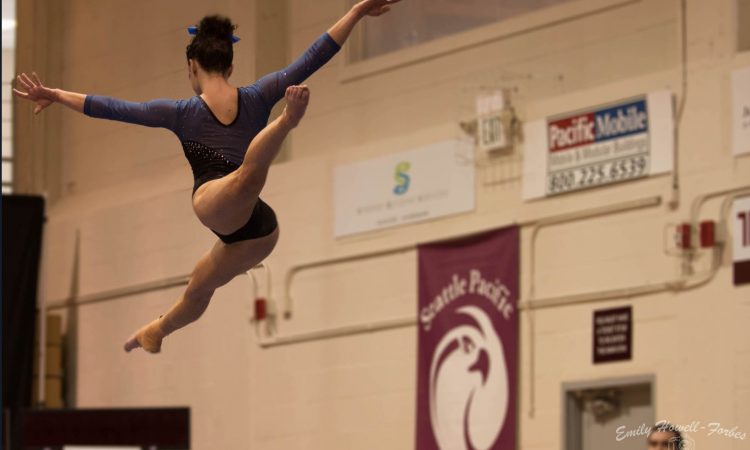 Southern Connecticut State’s two biggest stars are both seniors in 2018, so the Owls will be hoping to take full advantage of their abilities in their final season. Losing only four postseason routines from its 2017 graduated class and gaining a freshman class of seven, they’re well positioned to improve on last season’s No. 69 ranking.

Seniors Kathleen Aberger and Alexandra Avendano frequently contributed three events in 2017, often scoring the highest of the team. That said, SCSU is a squad with a great deal of parity; most of the upperclassmen contribute a few weekly routines. Plus, freshman Gracie Hundley was strong in J.O. and could be a great addition to a team that otherwise lacks an all arounder.

Neither of the Owls’ 2017 graduates typically vaulted, so the team could return its postseason lineup untouched. Avendano and Kylyn Dawkins typically score between 9.4 and 9.7 and were extremely consistent last season. Tiffany Elliot boasts the Owls’ top 2017 score, a 9.75 for her Yurchenko tuck full. Tiffany Coleman and Alexandra Lesperance also competed weekly, and Isabella Antonangeli occasionally joined the top six, especially toward the end of the season. Kasey Kilmurray returns to provide another option.

Sophomore Melena (often called Myel) Ristenbatt didn’t compete in 2017, but in level 10 she scored as high as a 9.575 for her Yurchenko layout half—an exciting option for a lineup dominated by Yurchenko tuck fulls and handspring front tucks. Freshmen Gracie Hundley, Keara Loughlin and Jenna Zakala have all trained Yurchenko fulls, as well as scoring well on their Yurchenko layouts. It’s difficult to predict if any of these difficult vaults will materialize, but the depth is encouraging nonetheless. Cadi Borsellino and Emily Balasco also have strong layouts and could find their way into the lineup through their consistency. SCSU has fantastic depth on this event and an exciting variety of technically strong vaults, so success here will mean keeping landing deductions down.

Bars is typically a weaker-scoring event for lower-ranked teams. Though SCSU isn’t ranked much lower here than its other events, its event RQS is almost a point lower than the other three. It’s also the only event on which the Owls lost more than one postseason routine. That said, many of these routines are creative and dynamic: Aberger’s pirouetting work is precise and beautiful, and Antonangeli’s double twist dismount is well worth a watch. Those two were both frequent contributors in 2017 and will be expected to return, alongside Lesperance and Kilmurray’s consistent scores. Michaela Gilbert and Jacqueline Kutcher also provided some great scores and could easily become weekly contributors with a little more consistency.

Freshman Hundley has scored up to 9.375 for a simple but tidy routine in J.O. and could easily figure into the top six. Loughlin hasn’t scored as strongly yet, but she has a great Gienger and a Pak salto—flashy skills that could make her a star.

Beam is the apparatus on which the Owls have the most options. They return eight gymnasts who competed last year and add a number of viable freshman routines as well. Aberger is the star of the lineup and is almost guaranteed a late lineup spot in 2018. However, she doesn’t hold SCSU’s top 2017 beam score; that honor goes to Michaela Gilbert, who topped out at a huge 9.85. Gilbert competed inconsistently in 2017, but if she can repeat anything close to her career high, she should become a regular feature this season. Gilbert and Aberger should be joined by Dawkins, whose consistency is a great asset here, as well as Avendano and Keylea Brothers who competed frequently in 2017. Kutcher and Elliot provide other options.

Freshman Morgan Gatewood seems poised to become an immediate beam star, with a fantastic top score of 9.5, as well as extremely encouraging consistency in J.O. competition. Hundley and Loughlin could also figure in here, with highs of 9.4. Sophomore Ristenbatt, Borselllino, Zakala and Melanie Coleman provide still more options. With so many choices, the Owls will hopefully be able to prioritize consistency and turn beam into a strength.

Floor is SCSU’s strongest event by 2017 RQS, and with five likely returners, it should be able to build even further this season. Avendano is the star here, boasting scores up to 9.875 in 2017, as well as impressive consistency. Aberger, Elliot and Dawkins should also return to make this the Owls’ most stable lineup. Brothers competed frequently in 2017 for consistently high scores, and could become a weekly fixture while Kilmurray, Coleman and Lesperance provide other options.

Sophomore Ristenbatt scored as high as 9.375 in J.O. and if healthy, could figure in here. Hundley scored similarly and is a strong contender. Balasco, Borsellino, Loughlin and Zakala all have top scores around 9.2, though the latter two are more consistent. Zakala in particular is a powerful gymnast with a top 100 score in level 9; 2017 was her first season competing level 10, but she could easily become an asset here.

Between SCSU’s twenty returning postseason routines and a strong freshman class, it has every reason to expect a successful season. The Owls began 2017 scoring in the mid-180s and broke into the 190s in February. With a much deeper team in 2018, they’ll look to reach the 190 mark earlier and continue building through the rest of the year.