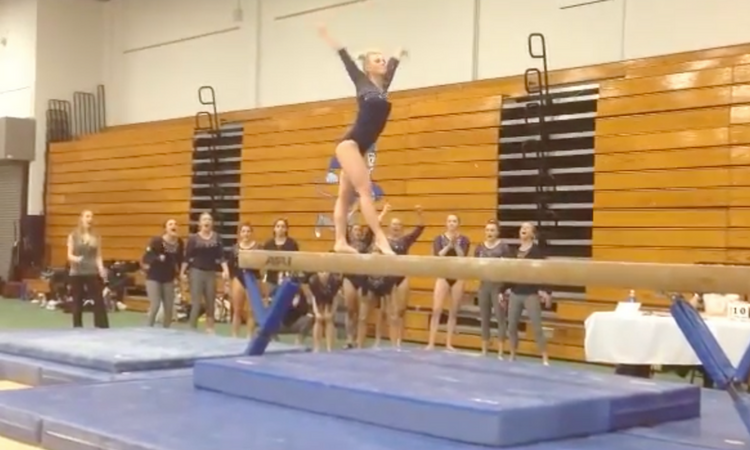 Stout finished the 2017 season ranked No. 76. It was a successful season for the Blue Devils, qualifying to NCGA nationals for the third time in 10 years. Additionally, Stout finished ranked fifth at NCGA nationals, its highest finish since 1984. The team also hit a season high of 189.35, had two All-Americans in 2017 in now graduated senior Kaylee Jondahl (all around, vault, floor) and sophomore Mikala Bugge (vault). The Blue Devils only lose three seniors, but each contributed greatly to the program and will be difficult to replace. Expect this season’s sophomores to take on increased roles and for key freshmen to make up for the losses. While predicting lineups in DIII can be difficult, previews can give you a good idea of what to look for from the Blue Devils next season.

Vault was Stout’s best event last season but the team will lose two of its strongest and most consistent on the event from 2017. Leading the returning athletes will be Bugge, who had an RQS of 9.610, showcasing both consistency and potential with a career high of 9.675. Other strong returning athletes include Belle Idhe and Sierra Beaver, both of whom had RQS scores in the 9.3 range. Nicholson and Brooke Terry also contributed consistently last season with RQS scores above 9.15. Cassie Evans and Kenzie Hyde also show strong potential on vault, earning season highs of 9.45 and 9.4, respectively. Additionally, expect the freshmen to make a huge impact. Shadae Boone is a huge recruit for Stout and all of DIII gymnastics, with a stickable Yurchenko one and a half (!) that seems poised to break many DIII records. Madison Lord also shows a serviceable Yurchenko pike that will provide good depth. Vault will likely be a highlight for Stout in 2018 with plenty of consistent returning vaults and wow factor.

Stout finished 2017 ranked No. 76 on bars. The top two bar workers from 2017 return in Nicholson (9.54 RQS) and Beaver (9.33 RQS), and Kenzie Hyde returns as well with a strong RQS of 9.255. Emma Byrd showed great potential last season, notching a 9.5 season high  while Kassondra Tulloch and Idhe tallied high scores of 9.25 and 9.225, respectively. Bugge only managed a season high of 8.9 last season, but keep an eye out for her to crack the lineup in 2018 as well. From the freshmen, Jaclyn Bertrand has a nice clear hip handstand to blind half to bail combo, Lord has a beautiful line and good rhythm that shows strong potential and Cassie Ehmann shows blind full to gienger and a full-in dismount in training videos. Boone’s weakest event is probably bars, but she shows a clear hip to Tkatchev combo and will likely challenge the top six if healthy. The potential on bars is there for Stout, so it will be a matter of depth and consistency whether the team can capitalize on that or not.

Beam was Stout’s lowest ranked event in 2017, finishing 77th. The contingent will lose two strong routines from seniors, but veteran Terry should lead the team with consistency and confidence, as her RQS reached 9.595. Other strong returners include Hyde (9.37 RQS) and Beaver (9.26 RQS). Nicholson and Idhe were also regulars in the lineup and will look to improve upon their consistency. Byrd, Bugge and Gray all competed on beam and look poised to enter the lineup more consistently in 2018. From the freshmen, Boone will showcase her unique-for-DIII round off double tuck dismount, and Lord has beautiful leaps and confidence on the event and could be a high scorer for the team.

Stout returns many strong floor workers in Bugge, Idhe and Weaver, whose scores of 9.7, 9.625 and 9.6, respectively, show excellent potential. Nicholson, Terry and Byrd were also consistent contributors with high scores of 9.425, 9.4 and 9.435, respectively. Hyde and Evans also competed in 2017 but are working to merely be healthy come 2018. From the freshmen, Boone could make a big impact here once again, with gigantic amplitude on all her passes, as well as a potential E pass.

Stout looks to be a strong team again in 2018 but will need to rely on freshmen and recover from the loss of a highly successful graduating class to do so. Expect sophomores Bugge and Nicholson to be big contributors, as well as freshman Boone. Returning all arounders Nicholson and Beaver have both scored above 37.5 and will look to improve even more in the season to come. If Stout can stay healthy and consistent, it should qualify to NCGA nationals for the second year in a row in 2018 and maybe even improve upon its finish from a year ago. 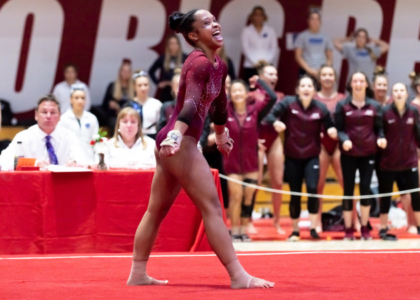