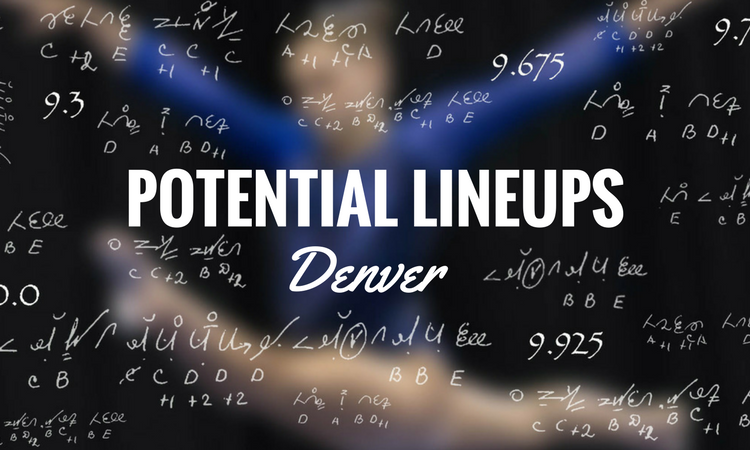 Despite depleted depth and sometimes fielding only five routines on the leg events, Denver had an incredible season in 2017, making it to the nationals for the first time since 2008 and finishing the year ranked No. 9, its highest finish ever. Despite losing a key class of seniors, including all arounder Julia Ross, Denver will again look to qualify to nationals as it brings in a small but fierce class of freshmen.

To start the season, Denver’s depleted depth forced the team to put up only five gymnasts on vault. However, despite this, the event was actually the Pioneers’ best, finishing the season ranked No. 7. Though it loses fulls from Ross and Rachel Fielitz, the strong incoming freshman class should make up for those losses or even improve upon them. Lynnzee Brown sports a dynamic Yurchenko one and a half that’s quite stickable. Emily Glynn only competed a Yurchenko full in J.O., but she’s training a Tsukahara full, which would be another 10.0 start for the Pioneers, which would bring the team’s total to three versus its one from 2017. Mia Sundstrom also has a useable full, but she’s been spotted in a boot since the beginning of the school year. This could pose a problem for Denver’s depth, but Sundstrom was seen out of the boot at Denver’s Open House. So while she isn’t doing hard landings yet, we hope this is proof she’s on her way to recovery.

As far as returning vaults, Maddie Karr is the clear leader with her Yurchenko one and a half that earned her a perfect 10.0 on one occasion. We fully expect her to repeat that feat in the coming season, so keep your eye on her. Nikole Addison also scored well in the past with her dynamic Yurchenko full, reaching a season high of 9.875. She’ll be another top vault contender likely serving in a late lineup spot thanks to both her score and her leadership ability. Kaitlyn Schou competes a clean full as well, with lower but fairly consistent scoring that might make her a good lead-off option. Diana Chesnok brings her own full but with significantly lower scores. However, Denver will have to make do with what it has, considering its lack of depth, so she will still likely end up in the lineup, especially without a landing-ready Sundstrom.

In other options, Courtney Loper didn’t compete vault last season, but in club she performed a decent Yurchenko half-on tuck off, which could turn into another 10.0 SV if she can upgrade to a pike or add a half twist to the tuck. Regardless, she may be called upon to vault if she’s training it, simply because Denver needs people to put into the lineup. Vault was the only event the Pios didn’t show at their recent public showcase, so it’s hard to tell exactly where the team stands. Grace Broadhurst was injured last year but did exhibition a few times in 2016 with a Yurchenko full, so if Denver is really struggling to put up all six, she might appear to save the day. Take a look below to see our full proposed vault lineup for Denver this season.

Bars was a solid event for Denver last season, finishing the season ranked No. 8. But in losing Ross, the team loses one of its best routines, so it may not be as much of a strength in 2018. This leaves a giant 9.9-sized hole in the lineup, so head coach Melissa Kutcher-Reinhart will have to find a gymnast to fill it. None of the freshmen are especially equipped to do so, so the veterans will likely have to be the ones to step up their game. However, Brown is definitely a possibility, with a steady set in her club days—although she does have some leg form to clean up before January. Glynn and Sundstrom also have passable sets, but neither is that powerful or clean to the point where they would make the top six compared to the veterans.

Of the returners, the strongest three are Karr, Chesnok and Samantha Ogden. Chesnok is a tad inconsistent, but she was the only one of these three without a fall, notching a high of 9.925, so she’s definitely a candidate for the anchor position. Ogden did have one fall and Karr had two, but both are also fully capable of 9.9+ scores. Ogden is more of an execution-focused gymnast, with gorgeous toe point and an easy swing, while Karr has more of a power set, with a high-flying Gienger and a strong double layout dismount. Claire Kern is another consistent option, reaching scores between 9.775 and 9.875 with only one fall, making her a good lead-off option. Leah Lomonte is a bar specialist, boasting a career high of 9.9 but also two falls, including at nationals. She’ll still likely be in the top six, but as widely as her scores vary, she may not end up in the late half of the lineup. Nikole Addison competed bars in about half of Denver’s meets in 2017, with one fall out of six performances and no scores higher than a 9.8. While she may still do bars on occasion to compete in the all-around, we consider her to be more of an alternate than a top-six pick. Below you’ll see how we’d lay out the lineup for the Pioneers this season.

Denver beam had its ups and downs in 2017, scoring as high as 49.4 and as low as 48.75 just four weeks apart. But in the coming season, the Pioneers will look to level out their performances with the help of the incoming class. Sundstrom, Glynn and Brown all have valuable beam sets, each with their own set of strengths. Sundstrom’s best asset is her dependability, making her a good pick for lead-off, even as a freshman. This is provided she is healthy enough for the task. But since she’s already training beam, we’re optimistic. Glynn’s strength is her artistry—near-perfect split positions and precise arm movements make her stand out. Brown is more of a sturdy beam worker. She may not have the elegant lines—and she does have a slight case of Karolyi knees on her series—but overall she can always be counted on to put up a dependable score.

As far as the veterans go, Karr and Schou rocked beam last year, both reaching a 9.9 on multiple occasions. Karr is the stronger of the two, but Schou was more consistent, as Karr fell once and Schou never dropped below a 9.75. Ogden was a strong contributor as well, hitting 9.8 or better almost every week without a single fall and showcasing polished form in her dance skills. It’s a blink-and-you’ll-miss-it sort of thing, but perfectly straight back legs and pointed toes are often hard to come by on these elements, so Ogden’s WOGA technique does not go unnoticed. Loper performed beam on and off last season with widely varied results, so despite the fact that she has a unique set with cool combinations (like a front aerial to side aerial series), she may not make the lineup often simply because of her lack of consistency. Addison competed beam on a weekly basis but definitely had some balance issues, with four total falls. She also doesn’t have the finesse that some of her teammates do, but in the event she makes a bid for the all around, we expect her to end up in the beam lineup at least a few times in 2018. Chesnok has also competed beam in the past, though not since 2016, but if Denver needs another routine, she is a third-alternate possibility. Below you’ll find what we consider to be the ideal beam team for Denver in the coming year.

With gymnasts like Karr and Addison in the lineup, you’d think floor would be Denver’s best event, but it was actually its worst, finishing 2017 ranked No. 16—its only event outside the top 10. However, the Pioneers only managed to field five routines on occasion, so with a bevy of routines at their disposal this season, floor should be more of a strength. Brown will the star, with a massive double layout and personality for days. If anyone is the second coming of Nina McGee, it’s Brown. Sundstrom and Glynn also have useable routines, particularly Glynn who sports a lust-worthy “no handed” full-in, but they may be eclipsed by some of the veterans. Glynn’s tumbling looks awesome, but her club scores are not inspiring. She frequently didn’t even compete floor, so putting her into the top six—especially with so many good returners—is hard to justify. There’s also the problem of Sundstrom and the boot, so we likely won’t see her tumbling on hard surfaces in time for the start of the season.

Addison and Karr lead the way for the veterans, likely closing the lineup with a stellar one-two punch of difficulty and power in both tumbling and performance quality. Karr looks to be upgrading to a piked full-in and Addison already has a fabulous double layout, but that’s only the beginning of the parade of new difficulty Denver is training. According to Instagram, the team boasts a full lineup of highly viable E passes. Schou already had a front double full that helped her reach a season high of 9.9. Claire Hammen was injured for most of 2017, but did enter the lineup three times toward the end of the season for lack-luster scores. However, in 2016, she earned multiple 9.9s and was steadily in the 9.85 range. She also appears to be training a double layout, which would put her at a huge advantage toward potentially being included in the lineup. Loper was also a frequent floor contributor in 2017, with scores typically between 9.75 and 9.85. With dependability like that, she could easily slide into the lead position to set the tone for her team. Finally, Kern competed floor on a few occasions, but both of her competitive outings had falls, so she would likely be a last-ditch option unless she’s made drastic improvements with her endurance over the offseason. Still, it’s nice to see that Denver can field a full floor lineup with three alternates who have all actually competed on the event before. Take a look below to see how we’d set up those nine gymnasts into a solid Pio floor squad.

In the all around, Karr is still Denver’s clear choice, especially after she finished ranked No. 10 in her freshman season. Her well-balanced gymnastics has made it so she doesn’t have a true “weak” event, and her stellar vault and floor give her the possibility for perfect 10.0s. Brown will likely be the second all arounder for the Pioneers, with strong vault and floor sets and dependable bars and beam, even if those are weaker events for her. Addison is also a possibility, likely breaking into the all around in sort of an Ashleigh Gnat situation.

Overall, Denver looks to be in a position to rebuild its depth and continue pushing forward in both parity and consistency. Its strong freshman class should contribute routines either in the top six or alternate positions for all four events, and this should allow the Pioneers to field a full lineup of routines. That in turn should help Denver either replicate or better its results from last season.