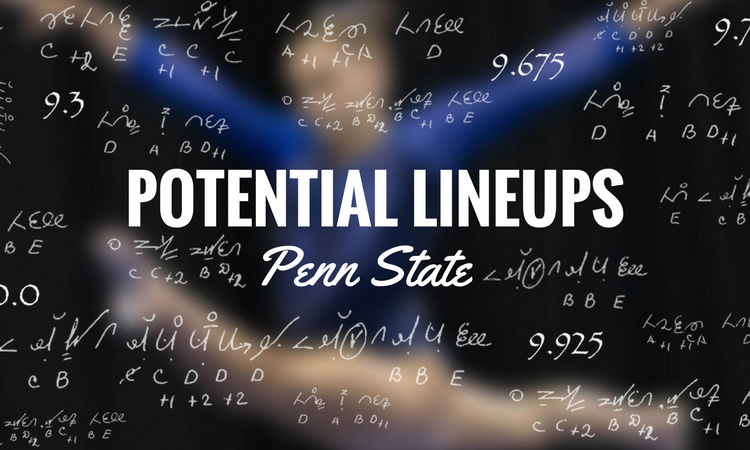 After a difficult last few years culminating in a drama-filled 2017 season, today’s analysis target, Penn State, looks ready to rise above its past struggles and make a triumphant return. With only a few graduating seniors and some strong incoming freshmen, the Nittany Lions look to be in the right position to make that comeback happen.

Vault statistically hasn’t been Penn State’s strongest event, and with the loss of Emma Sibson’s stellar 10.0 vault, the outlook at first glance isn’t great. But its incoming class of vaulters is hoping to change that. Lauren Bridgens should be leading the way with her gorgeous Yurchenko one and a half where she gets huge height and distance without an uncontrollable landing. Alissa Bonsall also makes a strong case for her inclusion with a dynamic Yurchenko full that she seems to be upgrading. Kourtney Chinnery also has a very stickable full with good scoring potential, and Ava Verdeflor has a very serviceable full that could be used as a dependable alternate option. Overall, and not just on vault, we fully expect this class to be a true driving force behind the revival at PSU—in addition to the new coaching staff.

The veterans aren’t interested in falling behind, though. Briannah Tsang has a solid one and a half that frequently anchored the lineup last season, and a few gymnasts have been seen upgrading. Jones was a strong performer on all four events before she was as injured, but now it seems she’s healthy again as she showed a one and a half on Instagram last month. Plus, new head coach Sarah Shire Brown teased that vault stalwart Mason Hosek is training a new skill, though what kind, we still don’t know. Sabrina Garcia has a steady full that should continue to serve her well in her AA efforts, as does Kristen Politz, though her AA spot is perhaps a bit more tenuous. Mikayla Waddell also competed her full a few times last season, though she’s probably the weakest of the veteran links. Here’s how we’d set up the vault lineup for the Lions this season. 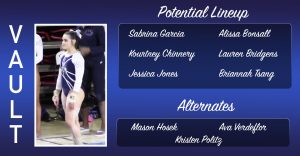 Bars was PSU’s best event last season, finishing the year ranked No. 22. But bars is also where the Lions lose the most, with Nicole Medvitz graduating and Chanen Raygoza retiring early. Luckily, both Bonsall and Bridgens have strong sets that could be capable of making up the difference. Both of their routines feature two D transitions, so we wouldn’t be surprised to see them ditch the single bar release and use the NCAA code to their advantage, but Bridgens also has a solid piked Jaeger she could throw in. Chinnery has a clean set, though bars isn’t really her strongest event.

Penn State’s veterans are also a strong bunch though. Bars is perhaps Garcia’s best event, typically scoring in the 9.85-9.9 region and topping out at 9.95. She’ll make a great candidate for anchor if she can keep up that trend. Jones has also done pretty well in the past, though she has been a bit inconsistent. However, with her ankle injury limiting her training for the last few months, bars was probably where she spent the most time, hopefully making her a more likely candidate for the lineup. Tsang was also a bit all over the place on the event last season, but she’s shown steadiness quite well in seasons past. Maybe with the new coaching staff and a better training environment she’ll be able to reclaim some of her confidence on the apparatus. Gianna LaGuardia was a regular in the bar lineup last season but was also the most inconsistent. With such strong freshmen, she may have some work to do if she hopes to keep her position. Politz, on the other hand, was fairly consistent, hovering between 9.8 and 9.875 most of the season. For a freshman in what could have been a very difficult training situation, we think she could make a good lead-off now that she has some experience under her belt.

Someone we haven’t seen much of is Amber Autry, a junior Nittany Lion who hasn’t competed in college at all. However, coach Brown seems to think that bars is her strongest event, and considering the lack of other strong options, we think she may make alternate or exhibition this season, at the very least. Tess McCracken was also an occasional contributor last year, and she’s apparently working on new skills to continue to stay relevant. But with so many options to choose from, she may get lost in the shuffle. Take a look at our proposed PSU bar lineup below. 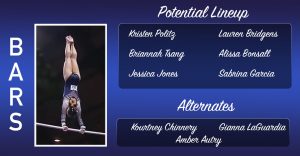 Beam was a bit touch and go for PSU last year, with a team high of 49.3 and low of 48.5. However, it did finish the season ranked No. 30, which lifted it up from being its worst event. They will especially miss Medvitz’s contribution, which frequently scored 9.9 or higher and was one of the only routines to do so. Bridgens will look to add some stability to the picture, having been so consistent in J.O. competition that we consider her one of the best candidates for the lead spot in the lineup. Bonsall has a bit more trouble staying on the beam, but her scores when she hits are definitely worth considering as part of the picture. The real gem in this freshman beam trio though is Verdeflor, with beautiful leap positions and long lines. She can be a little headcasey, so she’s probably best in the middle of the lineup, bookended by some more consistent gymnasts as to not cause a domino effect if she falls. But her variety of available skills and lovely technique should make it easy for her and the coaches to put together a routine with as little fall risk as possible.

As far as the returning beamers go, Tsang and Garcia again will likely lead the pack. Both have had their inconsistencies, but overall they’re strong performers capable of excellent scores. Tsang is the clear favorite between the two, topping out at 9.925. Hosek has also been a solid beamer during her time in college, not counting a single fall among her performances last year. Jones, due to her injury, only competed beam once in 2017 for a 9.725. However, in her previous season, she was capable of a 9.875, so despite the fact that she only went two for four on competitive beam sets, she’s still worth considering. But perhaps she’d be better off as an alternate until she can prove she’s a little steadier than a three-fifths hit percentage. Politz also had some major consistency issues, counting two falls and three more scores under 9.7, and her hit scores are weaker than many of her teammates. However, she did compete beam every single week in her freshman season, giving her a lot of experience that could help her be a decent backup option, as there are more likely candidates for the top six.Finally, Peyton Schuller started as an alternate, stepping in a few times before joining the lineup permanently for the last half of the season. Her score ceiling is the only one on the team below a 9.8, though, and with other stronger options she may be relegated to alternate permanently in 2018. Here’s how we’d set up the beam squad for the Nittany Lions in 2018. 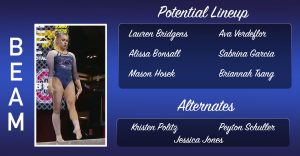 Floor was the team’s second-strongest event, finishing the season ranked No. 29. But it too had its ups and downs. Luckily, the team should retain its strongest floor workers, as well as gain a few new ones. Bridgens actually brings two E passes to college, a double arabian and a front double twist, both of which are quite powerful. Her clean lines and and strong tumbling should definitely earn her solid scores in college competition. Bonsall also has an E pass, a double layout, but it can be a little sketchy, so she may downgrade to a double pike for her college routine until she can clean it up and make it more reliable. She does have good musicality though, and the rest of her tumbling is still solid, so she’s a great option for the team’s floor squad. Chinnery is training a huge variety of E passes, most of which look like they could be viable for the season. She also has oodles of personality on floor and a huge presence, so she could make a great case for herself to make the final lineup.

The veterans won’t make that easy, though. Tsang and Garcia are again strong leaders here, with Tsang showcasing her tumbling in her double arabian and Garcia showcasing her dance skills. Last year, Garcia had a Beyonce medley routine with clean, solid tumbling that was heavy on choreography and attitude—so much so that while her teammates were going, she would be off in the corner visualizing and running through her choreography rather than any of her skills. When she nailed it, it was a true showstopper, and now with a more nurturing coaching staff, who knows what she’ll be able to bring to the floor this year. Other returning veterans likely include Hosek, Jones and Schuller. But keep in mind Jones’ injury and Schuller’s epic routine last season where she competed on a sprained ankle.

The final veteran we’d love to consider a factor would be Oni Timothy. After a rough last season, we hoped that under new coaching, she’d rise again to her former glory, having reached a 9.9 on multiple occasion and usually stealing the show with her powerful, sassy routines. But her brief Twitter preview with Brown is worded entirely different than anyone else on the team. It mentions her leadership qualities, but nothing to do with her competition readiness, training or likely events. We’re afraid that this may mean that, like Raygoza, she will not be competing this season, either medically retiring or moving into a manager-esque position with the team. We would love to be wrong, but for now, we have her listed as an alternate for this reason. Below you’ll find the rest of our proposed floor lineup for Penn State this year. 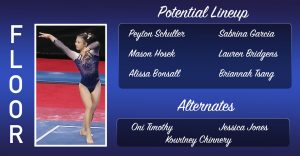 These potential lineups actually allow for four gymnasts to compete in the all around: Tsang, Garcia, Bridgens and Bonsall. Tsang and Garcia are no brainers—both qualified to nationals last season as individuals, and they finished ranked No. 28 and 33, respectively. Two freshman all arounders may seem a little unorthodox, but it’s clear that Brown believes in them and their ability to perform, even in their first year. Between their potential upgrades, strong scoring histories in club competition and the way their strengths fit into slots that need to be filled, we could definitely see both of these gymnasts competing all four pieces on the regular. Jones is also another possibility, especially if she is completely healthy. Her Twitter preview specifically says that she’s trying to get back into AA shape, so we consider her a possibility as well.

Overall, we couldn’t be more excited to see Penn State on the rise again. More transparency through the preseason is always a good thing, and we love the positivity emanating from the new coaching staff and how it seems already to be rubbing off on the team.

Next up we dive into Stanford’s potential lineups for 2018 under the helm of new head coach Tabitha Yim. To check out past analyses in the series, click here.