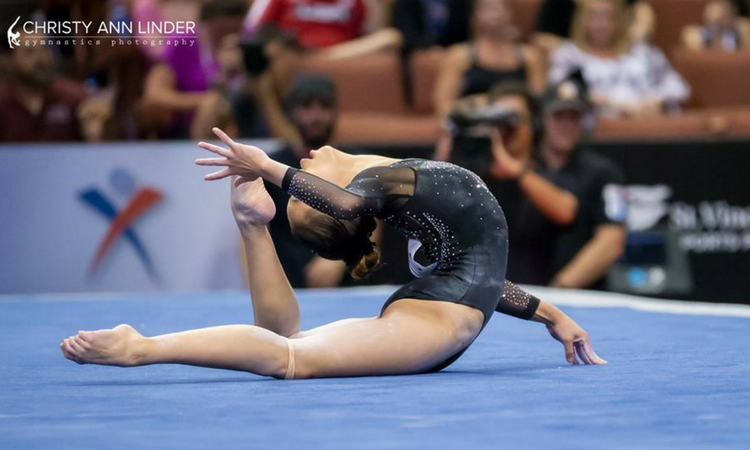 Over the past week, five current and future NCAA gymnasts traveled to Montreal to participate in the 2017 World Championships. We’ll be tracking these exciting prospects as they compete in the city of the first perfect 10 and hope that the experience will help them to score some of their own in the future.

Three members of Team USA are committed to collegiate gymnastics programs. Jade Carey will join Oregon State for the 2019 season, and Morgan Hurd and Ragan Smith are due to begin competing for Florida and Oklahoma in 2020, respectively. Non-traveling alternate Jordan Chiles is committed to UCLA for the same year. Of course, since these girls are increasingly high-profile and at the beginning of their elite careers, it’s possible that they will turn pro or defer from college until a later season.

Cornelia “Cathy” Eksteen of Washington’s 2021 cohort trains in Texas at Metroplex Gymnastics but competes internationally for South Africa. She will be performing on beam this week. Boise State sophomore Courtney McGregor is reprising her elite days, leading a trio of younger gymnasts to represent New Zealand.

Unfortunately, Jamaican sisters Toni-Ann and Maya Williams (of California and Arizona State respectively) were on the nominative roster but will ultimately not compete in Montreal.

Eksteen was the first collegiate gymnast to participate in podium training, looked a little nervous but working through her beam routine with poise and great extension, especially on her leaps and her double twist dismount. In recent years we’ve seen many international gymnasts like Eksteen who train in the U.S. and compete both level 10 and elite, succeed in NCAA, so she’s an exciting prospect for Washington.

McGregor is taking a week off from college right before midterms to represent New Zealand in Montreal. She is the only gymnast from New Zealand to compete in the all around, and she’ll also show two vaults. In podium training, McGregor vaulted a Podkopayeva (Yurchenko half on, pike half off) and a full twisting Yurchenko. (She’s competed a Yurchenko one and a half and double twists recently, so there’s potential to upgrade.) There’s no footage of her bars, but her beam routine was difficult and aggressive with just a few mistakes, and her floor was excellent, highlighted by a stuck pike full-in. It’s incredibly impressive for a college gymnast to have retained her level of difficulty after a year away from the elite scene.

Carey was the highlight of the United States’ training session. Her two vaults were the best we’ve seen fro her in her short elite career, and she showed near sticks in two of her difficult tumbling passes on floor. Her tumbling looks too easy, as she’s able to visibly open up and spot the landing on a double double—an incredible feat even by the standards set by Simone Biles. It’s worth remembering that Carey was a bars standout in J.O., with a high score of 9.7. Since she only qualified elite this year, she doesn’t have the volume of skills required to put an elite routine together, but it’s entirely possible that by next summer she’ll be competing in the all around. Even if she elects to focus on her strongest events during her elite career, we should expect to see her in all four lineups in Corvallis.

Smith demonstrated the mental toughness that will make her a leading competitor in the all around this week. She made a few mistakes, but in every case she fixed the problem on the second attempt. Her double twisting Yurchenko on vault seemed effortless. On bars, she missed her Ricna in the first routine but successfully connected it to her Pak on the second. On beam, her punch front presented a problem, and we haven’t yet seen the Patterson dismount that would put her difficulty score up with the highest in the world. Smith finished on floor with a strong routine with slightly reduced difficulty. Her issues on beam today probably aren’t a major concern for the meet as she’s proved her resilience and competitive ability repeatedly over the last two years.

Finally, fan favorite Hurd will join Smith in the all around after beating her at the selection camp. She showed a great Yurchenko double on vault and a tidy and consistent bar routine. She came off on her acro series in one beam routine but the other was great—especially her phenomenal standing full—though she’ll need to watch her leap connections. She overpowered her first few passes on floor but got things back under control to stick her double pike. In the mixed zone afterward, she couldn’t stop smiling about how thrilled she was to have made the team.