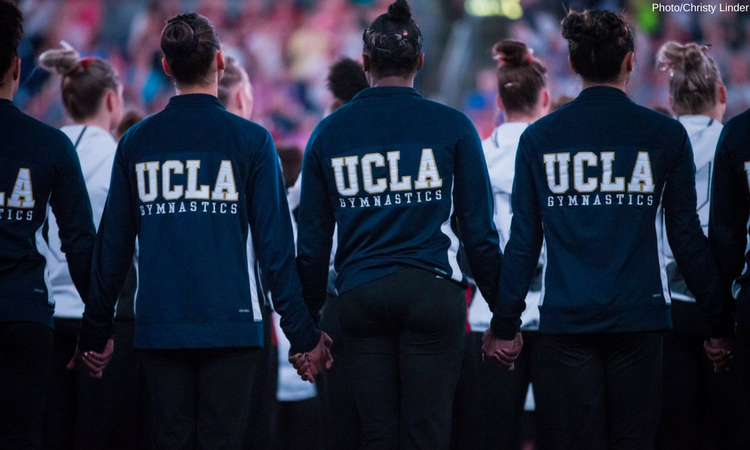 The season is coming! …kind of. Many universities started class this week or will next week, which means that preseason training is finally underway. We’re excited to see what each team will bring to the season, especially now that (most of) the coaching changes are settled and training videos have started to crop up. But while there are still a lot of question marks about many teams, we decided to narrow it down to just one things we’re interested in find out in 2018—starting with the top 25.

The obvious one is of course, can the Sooners three-peat especially with such parity among the top schools? But what we are really curious about is the freshman class. It’s mainly composed of ninja level 10s and two former elites, and the name Abigail Matthews might ring a bell for the elite connoisseurs. While none of the recruits are big names like Maggie Nichols or Brenna Dowell, they are still great in their own right, and we can be certain the coaching staff at OU will use all of each of their potential to the max.

LSU just graduated one of its best senior classes it’s ever had and is welcoming a fairly big freshman class with seven total newcomers. Will the Tigers be able to stay at the top and defend their SEC title without the likes of Gnat, Ewing and Zamardi?

The Gators are losing exactly zero competitive routines from last season’s Super Six while adding six freshmen, three of which being recent former elites. The biggest question mark is the health status of freshman Vanasia Bradley, who is coming off another ACL surgery. With the addition of Alyssa Baumann, as well as Jazmyn Foberg arriving a year early, there’s no doubt that Florida will maintain its previous success. We already know that the Gators have the talent, but is this their year to get back to the top?

One big question mark going into the 2018 season for the Bruins is whether or not we will see any 10.0 vaults actually materialize on the competition floor. With at least six on the team that we know of and nearly four months to make them competitive, there’s no excuse to have a lineup of substandard fulls once again.

Utah is in a great position coming into the 2018 season. The Red Rocks are only losing one gymnast, keeping superstar Mykayla Skinner and adding in a handful of freshmen routines, as well as getting back Kim Tessen and Sabrina Schwab from injury. Utah consistently makes nationals appearances and with Skinner leading the pack, its not going to want 2018 to be any different. We’re looking to see if Utah can keep the pace of 2017, especially with two gymnasts looking to reappear in lineups. Utah is itching for a nationals title and, on paper, the position they’re in is near-perfect for a healthy rivalry. Utah has a stellar team for 2018, so will this be the year their fight pays off?

Everybody who has followed elite will be interested in seeing how Bailie Key is doing in her freshman year at Alabama. Key was a rising stars on the U.S. elite scene until nagging back pains took her out of the running. Key has not competed since 2015, so we’re eagerly awaiting her return to see what her gymnastics even looks like and if she can be a major contributor for the Crimson Tide.

One big question mark for Nebraska this year is freshman Kynsee Roby. She has the potential to be a huge asset to the team but had ACL surgery at the end of the season. Will she be healthy and bring her clean gymnastics to the Huskers’ lineups or will the injury bug bite yet another potential Nebraska star.

After a nearly historic 2017 campaign, the main question on everyone’s mind is whether Elise Ray can keep her program on the rise. Making nationals in a hard-fought battle with Kentucky was the first step. But was last season a one-off or the new normal?

Denver finished one of its most successful seasons in recent history last season. It maintains Maddie Karr, who was an all around superstar in her freshman year, while bringing in three freshmen, most notably 2017 J.O. all around runner-up Lynnzee Brown. Brown performs a dynamic yurchenko one and a half, and we can’t wait to see the her and Karr at the back of the vault lineup. Most importantly, can this team continue to rise in the rankings and make team history?

Michigan lost two superstars in Nicole Artz and Talia Chiarelli, and we can’t wait to see who will step into their shoes. Olivia Karas, Paige Zaziski and Lauren Farley have the talent. Can they finally bring Michigan to the Super Six after so many years on the outside looking in?

The Beavers are losing one heck of a senior class. Between Maddie Gardiner and Kaytianna McMillan Oregon State is losing a multitude of high quality routines. With a small freshmen class consisting of only one high-caliber gymnast in Kaitlyn Yanish, it will be up to the upperclassmen to step up and fill in the supporting roles. In particular, we’re excited to see Canadian sophomore Sabrina Gill come into her own, as well as what Florida transfer Lacy Dagen can do in (hopefully) increased competition time.

This one is an easy one. Obviously, we are interested in seeing Courtney Kupets’ triumphant return to her alma mater, and are curious to see how she’s going to fare in her first year as a head coach—with a relatively inexperienced coaching staff to boot. Also, Suzanne Yoculan’s return to the competition floor. Duh.

The Broncos have been on the rise for the past few seasons and that continued in 2017. They have steadily remained in the top 15 for a few seasons now, and they show no signs of slowing down. The team loses three girls—Paige Urquhart, Diana Mejia and Mackenzie Bennion—and gains three newcomers, including former elite Emily Muhlenhaupt. So the main question is, after so many years of being almost there, can Boise State finally make the final push and qualify to nationals for the first time ever?

Another team that has been on the rise over the past couple of years, Kentucky looks to continue its success in 2018. The Wildcats aren’t losing any routines but are instead gaining a solid group of J.O. competitors, highlighted by Tra’Vanni Jacobs. With their strong group of upperclassmen, we are excited to see what they can do this season. Can the Wildcats make nationals after being narrowly edged out in a competitive regional last season? We can’t wait to find out.

Auburn suffered a setback last season after losing Caitlin Atkinson to graduation in 2016. And while we’re interested to see whether the incoming freshmen can help put the Tigers on the upward path to nationals again, we’re more interested in whether or not the team can defeat Alabama and finally turn the competition into a real rivalry.

We sound like a broken record, but California is another team that has constantly been on the rise for the past few seasons (parity!). It graduated a very strong senior class in 2017 and will be looking to fill lots of lineup spots for 2018. Will its incoming class of strong J.O. competitors and Polish elite Alma Kuc be enough to help Cal continue its rise? We are excited to see what the Golden Bears can accomplish this season—especially with Toni-Ann Williams back from injury and in the mix once more.

Missouri has become more competitive in the past few years, causing the SEC Championships to be more of a fight than ever before. No dual meet is safe when the Tigers are the other team on the competition floor. In 2018, we’re looking forward to seeing just how high Missouri can rise and which upsets it has on the docket.

Iowa has been on a steady rise since the 2014 season, and they have some big name recruits lined up in the future. We’re excited to see whether that trend will continue, especially without Mollie Drenth.

With the addition of Courtney McCool Griffeth (and her husband Garrett) to the staff, we cannot wait to see the floor routines the former Olympian has up her sleeve for the Razorbacks. Plus, with fresh faces being added to the roster and the return of Amanda Wellick, we’re hoping Arkansas will have a season where every meet has at least five competitors on every event.

The Mountaineers are coming off one of their highest-ranking years in recent history. They broke into the top 20 for the first time since 2007 and are losing relatively few routines. Can they keep their upward trajectory going into 2018? And where do the four freshmen fit into the mix? We’re excited to find out.

Illinois has a new coaching staff for 2018 led by former Utah State coach Nadalie Walsh. Will the Illini be able to live up to their talent under Walsh, led by Mary Jane Horth and Lizzy LeDuc, as well as finish in the top 20 this season?

The Thunderbirds are coming off one of their best seasons on record where they broke program scores left and right and had the first perfect 10 in school history. With a very young team, only four out of 23 gymnasts on the roster are upperclassmen, it will be quite exciting to see all of the records that SUU will hope to break in 2018.

The Colonials are on the rise like many of the other teams on this list, and given their trend of breaking records, winning titles and sending stellar gymnasts to nationals, we can only see their stock going up in 2018. Though GW loses Chelsea Raineri and Alex DeMoura, they retain superstar gymnasts Cami Drouin-Allaire (who qualified for nationals in 2017) and Jillian Winstanley, both of whom we can’t wait to see lead GW into more record-breaking triumphs. Winstanley in particular has scored some of the Colonials’ highest scores, and we hope to see her finally qualify for a spot at nationals. Furthermore, GW has six incoming freshmen who have a variety of strengths, and it’ll be great to see some underclassmen shine.

We can’t wait to see Meredith Paulicivic at the helm for the Buckeyes—from her atmospheric changes in the gym to the floor routines she produces on the competition floor. Can she turn the program around and set the Buckeyes on the rise again?

After a successful 2017 campaign, ending in qualifying two individuals to the NCAA National Championships, the Chippewas will look to maintain that success in the coming season. Denelle Pedrick is returning from a summer of representing Canada internationally, and it will be fun to see how her experiences can help her lead the CMU team up the standings.

Article by the editors of NCAA Gym News