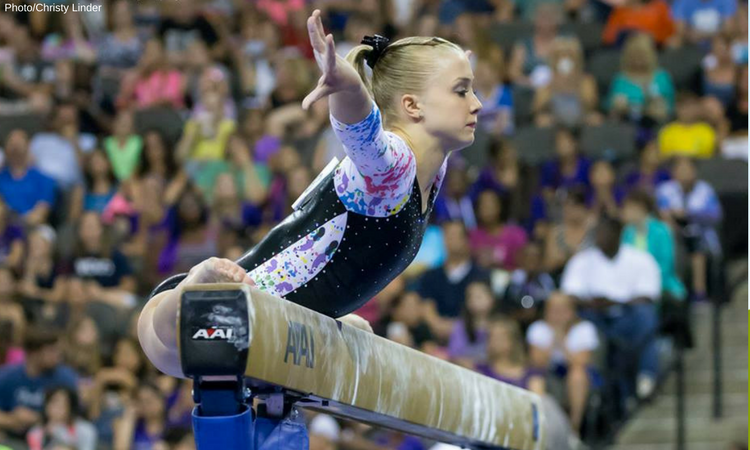 Every year a crop of former elites joins the NCAA gymnastics ranks. While some shine, such as Maggie Nichols and Bridget Sloan, others flounder, causing us to be cautiously optimistic about the 2018 freshmen until they’ve actually stepped on the competition floor.

We haven’t seen Key compete since 2015 and have no idea what her status is heading into college. While we’re optimistic she’ll be healthy in Tuscaloosa, with her injury history and fairly recent posts indicating otherwise, it’s more of a waiting game for this former Texas Dreamer. When on form, Key can be one of the very best in the world let alone on the college stage. But we’ll have to wait and see whether she’s in one piece come January.

The status of Florida’s cohort of newcomers will really make or break the Gators’ upcoming season. With so many former elites, the immediate reaction is instant stardom. However, many of those high-level stars are injury prone and their current status is unknown. In the case of Baumann, the elbow injury she suffered before the Olympic Trials was so severe, she decided to defer college for a year to fully rehab it. While we’ve seen training clips—and good ones at that—of her on beam, the other three events are still up in the air.

Another Florida question mark, Foberg graduated early to join this year’s class, and while this is an exciting development, it’s also a bit odd. She’s not been seen on the competition floor in over a year, and her last outing at the 2016 U.S. Classic wasn’t exactly what we’d call strong. However, at her peak, Foberg had a strong all around set that, with downgrades to improve execution, could really be competitive in NCAA. Her floor in particular could really be a showstopper, especially if she still has any of her tumbling difficulty. But the fact that there’s so much we don’t know leaves some room for a letdown.

Bradley is one of the most mysterious on the list. She established herself as a standout junior elite but suffered an ACL injury in 2013, which kept her out for two years. She switched gyms alongside her coach during her layoff and competed level 10 at a few meets in 2016, wearing a large knee brace but achieving fair results, especially on vault. She then moved back to her original gym, Splitz, to compete a single meet in December 2016 and hasn’t been heard from since. She had planned to return to elite in 2017, and it’s likely that she’s had more injury trouble in the meantime. The videos that exist from 2016 show that she’s retained all of the technique and some of the difficulty from her elite days, but her injury status will be a big question as preseason begins.

Marissa Oakley will enter her freshman NCAA season fresh off of competing vault and bars at this month’s P&G Championships. She is one of the few elites who has chosen to compete the season before entering college, which is especially interesting since her three-event appearance at the U.S. Classic was her first major elite competition since 2014. Oakley looked a little shaky at the meet, but with lower-difficulty NCAA routines and more time, she should have a strong freshman year if she can stay healthy. She is a question mark, though, since we’ve seen so little of her recently.

As far as we know, Desiderio is raring to go down in Baton Rouge. However, she haven’t seen her since the 2016 Olympic Trials. Did she take time off after the Olympic process? Was she ever planning to make another run at elite before ultimately deciding to enter college early? Those things we don’t know, but if Desiderio is anything like she was in San Jose last July, she’ll be an immediate star come 2018.

Dean’s career trajectory is one that’s increasingly common for top NCAA recruits; she qualified junior elite in 2013, competed the elite summer after a full level 10 season and then picked up a knee injury. She returned as a standout level 10 only to end up missing her senior season. Bridget has scored over 9.7 in every event in J.O., and her elite background will give her more options to compose competitive college routines—if she’s healthy. But we’ve heard very little from her over the past year and she didn’t sign when we expected her to, leaving us in doubt whether she would even still be joining LSU in the fall. However, her social media still indicates it to be the case, but we’re remaining cautious about her prospects.

We’re so excited to see Ramler bring her unique skills to the college stage. If she keeps even a handful of them in her routines, the fans will absolutely flip. However, as we all know, with risk comes reward. While Ramler was definitely an exciting gymnast to watch, she wasn’t always the cleanest—and perfection is the name of the game in the NCAA. It will be interesting to see what Ramler decides to do in college. Will she stick with the unusual skills and work to clean them up or will she water things down and go for things she already knows she can hit with little-to-no errors?

Navarro heads to Stanford after an astoundingly good level 10 season where she was one of only six gymnasts in the country to score over 39.0 in the all around. She finished as state and regional all around champion and picked up a beam title at nationals as well as a runner-up finish in the all around. Unfortunately for her, one of the handful of gymnasts to beat her top score joins her in her class at Stanford; everyone on the team will have to work hard to keep pace with level 10 standout Rachael Flam. We’re also curious to see if Navarro regains the Yurchenko double that she competed in elite since the Stanford lineup could definitely use another 10.0 start.

UCLA is known for scooping up former elites, and this recruiting class is no exception. Dennis competed elite through 2016 and dropped down to level 10 for her final season. She took the Senior F all around title at J.O. nationals this year and placed highly on every event. Dennis kept some of her big difficulty at level 10, including a double arabian but only vaulted a Yurchenko full. UCLA is notorious for bringing big skills early in the season and simplifying routines later in the year for better chances at clean routines. Will Dennis throw big skills throughout the season or keep it simple and clean? And how will she adapt to NCAA floor choreography and performance, especially under Miss Val?

The only international gymnast on this list, Tratz was kind of a left field pick for UCLA’s recruiting class. Competing for Germany gives her great experience but leaves a lot to be desired in the coverage department as far as your average NCAA viewer is concerned. It seems that all she’s competed this year is vault and floor, and her floor results haven’t been her best. However, vault has been rock solid, including a win at the German national championships. UCLA could really use a solid vaulter, but it’s doubtful that’s all they’ll need Tratz for. Plus, it’s still up in the air as to what vault she can consistently compete without adding herself to the Bruins’ injured list. International gymnasts are often a source of uncertainty for UCLA, and Tratz is no exception.