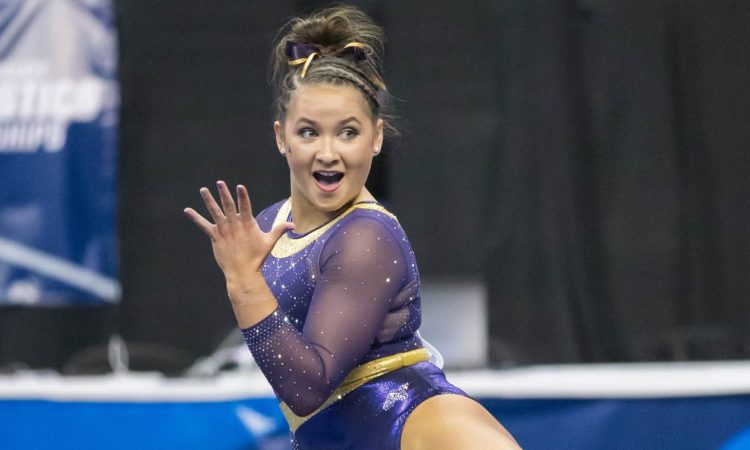 ​There were superstars on each team that qualified to nationals this year—MyKayla Skinner, Maggie Nichols, Alex McMurtry, Ashleigh Gnat. No doubt they are incredible gymnasts and contribute largely to their team’s success. But each team also has two- and three-event specialists who consistently put up the solid scores without which no team can be successful. We take a look at some of the gymnasts who don’t always get the glory but who were indispensable to their nationals-bound teams in 2017.

Alabama was dominated by very strong upperclassmen this year. While a number of underclassmen contributed throughout the season, freshman Maddie Desch was particularly consistent. She competed vault and floor 11 times and beam in 12 meets for the Crimson Tide. Desch regularly put up 9.9s on floor and only had three scores below a 9.7 on any event all season. She was a consistently important part of the team in 2017 and will play a key role next year as Alabama reconstructs its lineups in the wake of losing 10 routines from seniors.

Maddie Karr and Julia Ross were, rightfully, the stars of Denver’s 2017 campaign, but Nikole Addison also played a big role in the team’s stellar year. The junior competed in the all around in six meets for the Pioneers and was in the vault, beam and floor lineups every weekend. She regularly scored 9.9s on floor and averaged a 39.054 in the all around in the six meets she was on all four events. Without her strong scores, Denver would not have been as successful as it was in 2017. Perhaps we will see Addison in the all around more often in 2018, filling the hole now left by Ross.

Rachel Slocum is well known for her wild personality and sideline dance moves, but she is more than entertaining. She put up big scores that bolstered the work of Alicia Boren, Amelia Hundley and Alex McMurtry. Slocum appeared on vault and floor for the Gators in every meet of her junior season, never scoring below a 9.8 on either event and scoring 9.9 or better 13 times. Plus, her handspring pike half vault garnered two 9.975s. Perhaps we’ll see a 10 from Slocum in her 2018 senior season.

Georgia’s rocky year, comparative to its historical success, had some big highlights from stars like Morgan Reynolds and Sydney Snead, as well as newcomers Rachel Dickson and Sabrina Vega. Georgia struggled with falls and inconsistency throughout lineups all season. Junior Vivi Babalis was consistent, though, and kept the team on track. She competed beam and floor in every meet for the Gym Dogs, and, after a tough first meet, regularly scored in the 9.8s or better. Babalis was part of the reason Georgia recovered from its week one 193 and will be an important part of 2018 lineups.

LSU’s spectacular season was headlined by big names. Sarah Finnegan, a big name in her own right, was touted all year for her beam prowess. Finnegan, though, was valuable to LSU for more than her wolf turns and in fact, had consistently higher scores on every event other than beam. She competed in the all around seven times in her sophomore season, including throughout the postseason, for a huge average all around score of 39.35. She also competed bars and beam in every meet for the Tigers and averaged above a 9.825 on on every event in 2017. Ashleigh Gnat leaves behind a big hole, and Finnegan will play a significant role in filling it.

Michigan has consistently become a bubble team; it is always close, but falls just short of bursting into the Super Six since qualifying in 2011. In their 2017 tenth place finish, the Wolverines were headlined by seniors Talia Chiarelli and Nicole Artz, as well as sophomore Olivia Karas. Another sophomore, Emma McLean, was also a big part of Michigan’s success. McLean competed every weekend on vault and floor, consistently scoring 9.9s on vault, including one 9.975. She also has a useable bars routine capable of a 9.85, despite some early season troubles and falling out of the lineup. McLean will be a big part of Michigan’s efforts to make it all the way in 2018.

Everybody come out to Devaney tomorrow at 4 to help cheer us on at our regional. Not only is this the last home meet of the year, it's my last time competing in Devaney EVER! Don't miss out #GBR #SeniorSeason

Nebraska was a team on the brink in 2017. It  just missed stealing the Big Ten title from Michigan and finished one spot short of qualifying to the Super Six after coming into the championships ranked No. 14, largely thanks to the efforts of Jennie Laeng and Taylor Houchin. Ashley Lambert’s floor routine garnered her some attention during the postseason, but she is much more than that one routine. The senior competed every meet on vault for the Huskers and regularly put up very strong bars and floor scores. Lambert did all this after breaking her neck shortly before entering NCAA and competed with the degenerative liver disease PSC throughout her collegiate career. Lambert is a survivor and was a huge part of Nebraska’s 2017 success.

Oklahoma was untouchable this season, largely thanks to Maggie Nichols and Chayse Capps. The team was full of talent and always put up strong routines. Senior Charity Jones led off the Sooners on three events all season. She led the lineups with confidence, poise and a strong score on vault, beam and floor. Jones never scored lower than a 9.7 and finished the season with a number of scores 9.875 or better—a difficult feat from the leadoff spot. Though the Sooners won’t be short on talent in 2018, Jones’ cool head and strong start will be missed.

whatever direction you choose to go, make sure it's straight. ♡ especially when you are on a 4inch beam, definitely go straight →

Oregon State had a strong season, happily qualifying to nationals and finishing ahead of Georgia. The team was led by all arounders, but Dani Dessaints was part of a small army of two and three event gymnasts bolstering the team score. The junior competed vault and floor in every meet and with the exception two early-season vaults, always scored above a 9.8. Dessaints also peaked at the right time, scoring all seven of her 9.9 or higher scores in the second half of the season. She will need to step into a leadership role in her senior season with the absence of Erika Aufiero, Silvia Colussi-Pelaez and Kaytianna MacMillan, and she seems more than ready.

It is extremely challenging to select an MVP for UCLA, partly because it has so many incredible gymnasts, and partly because Miss Val likes to shake up the lineup so often. That said, one person does stand out. Hallie Mossett was beloved this season for her Beyonce floor routine, and the routine was high scoring in addition to being a showstopper. Mossett never scored lower than a 9.8 on floor and regularly put up 9.9s. She was also a strong beamer for the Bruins, notching a 9.85 in the Super Six. The senior will be missed in 2018. Though knowing how Miss Val likes to reuse choreography in fun ways, we’ll probably see sparks of her Beyonce routine for years to come.

Utah was a small team dominated by all arounders in 2017, and it was made even smaller by injury. This meant that many gymnasts had to step into big roles. MyKayla Skinner incredibly competed in the all around every weekend, and Makenna Merrell only sat out four routines all season. Freshman Missy Reinstadtler took the added pressure and shined. She competed beam and floor every weekend and was added to the bar lineup after the first meet of the season. She regularly scored 9.9s and never scored below a 9.775 after week four. Reinstadtler was indispensable for the Utes and will be a mainstay in lineups in 2018.

Washington had a dream season, qualifying to nationals for the first time since 1998 after being ranked No. 34 and No. 18 in 2015 and 2016, respectively. Led by the all arounder duo of Hailey Burleson and Joslyn Goings, the team filled out its score with event specialists like Kaitlyn Duranczyk. The senior put up big numbers for the Huskies all season on bars and floor and was especially valuable because she filled out the team on events other than its specialty, beam. Duranczyk put up five scores of 9.9 or better on bars and only scored below a 9.75 twice on either of her events. The Huskies will miss her consistency as they enter the 2018 season.