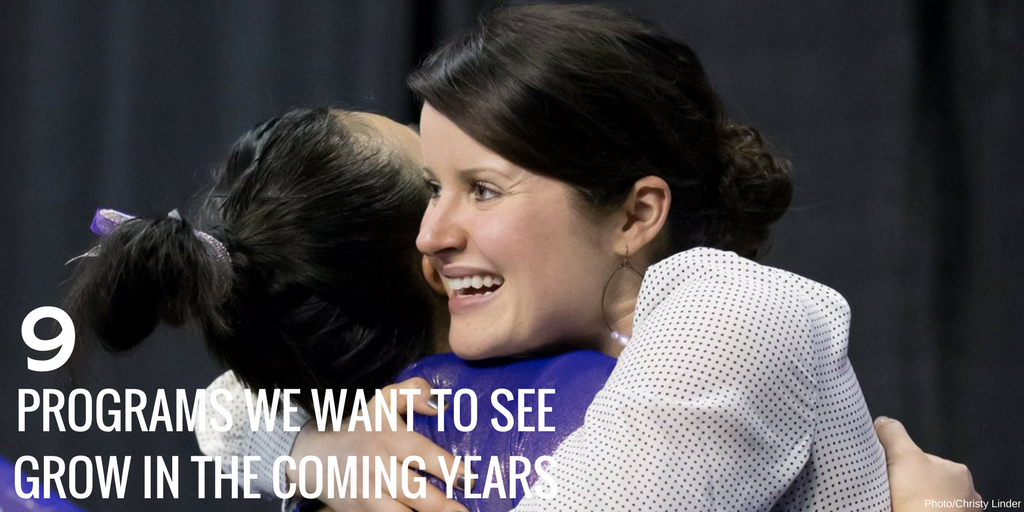 Only a few years ago, NCAA gymnastics was all about the big four teams with Georgia, Utah, Alabama and UCLA being the only teams to have won a national championships. But in 2017, there was more parity than ever with Florida and Oklahoma adding their names to the list. But it’s not just about that equality at the top of the standings. Many teams are on the verge of breakthroughs for making nationals or even squeezing back into regionals after years and years on the outside looking in. While many teams fit this bill, there are a few in particular we can’t wait to see grow.

Washington
After their stellar nationals-qualifying season in 2017, there are great expectations for the Huskies’ program moving forward. They seem to be up to the challenge, though, with great gymnasts returning from injury in the coming season and an excellent set of recruiting classes in the next few years. With Elise Ray at the helm, the future looks bright for Washington.

Eastern Michigan
Despite its ridiculous number of coaching changes, EMU remains one of the top programs we are excited to see over the next few years. With two new coaches in as many years, the program still managed to win two MAC titles and qualify to regionals for the first time in program history. Despite the departure of Sarah Brown and the fact that we still don’t know who will take her spot, we see no reason why the team would lose its momentum. The gymnasts obviously have what it takes to handle change, and they also know what it takes to win.

California
We’re so excited to see what Cal can do these next few years. Justin Howell has really transformed the program from a middle-tier Pac-12 school to one fighting for a spot at nationals. With Toni-Ann Williams healthy, a strong freshman class and standout recruiting coming in the next few years, don’t be surprised if the Bears are not only back at nationals but fighting for a spot in the finals as well.

Arizona State
Just one year removed from the Rene Lyst situation, Arizona State and the Santoses rebounded spectacularly, keeping their regionals hopes alive until the last weekend of competition. While making it back to their glory days are still years off, the Sun Devils are prime for a successful 2018 season. Going from about eight able bodies on the roster to more than 15 is a good first step. Plus, not to mention the leo game was on point this season.

North Carolina
2017 was just the beginning for UNC. Losing only one gymnast from last season’s roster, the Tar Heels are prime for an even more successful run in 2018. With a plethora of stars and unique, entertaining routines, we’re predicting success for the team in the coming years, thanks to Morgan Lane, Khazia Hislop and many of the other now-sophomores on the roster.

Ohio State
The Buckeyes have seen a dip in program performance in the last few years, but we have a feeling that’s all about to change. With new head coach Meredith Paulicivic in the lead, Ohio State can turn over a new leaf and start moving in a new direction. We’re definitely looking forward to seeing where this change in the wind will take this Big 10 team.

Kentucky
Kentucky was SO CLOSE to making nationals in 2017 with the regional results really capable of going either way based on the day both Washington and Kentucky had. But 2017 wasn’t an outlier for the Wildcats. The cohort of strong all arounders will be around for years to come as Katie Stuart, Alex Hyland and Sidney Dukes will only be junior in 2018 and Mollie Korth is only starting her second year. Plus, strong recruits and other solid supporting routines will help get the team back again fighting for a spot in the premier session of SECs as well as a spot at nationals.

Boise State
After another record-breaking season this past season, the Broncos came up just short of their goal of making nationals. We would bet good money that they’ll be back in the hunt once again in 2018 and beyond, losing only seniors and maintaining much of their depth of routines. We can’t wait to see what Boise has in store for us in the coming years.

Denver
Denver shattered everybody’s expectations in 2017, and we are so excited to see where the Pioneers are headed in the next few years. With its killer freshman class returning for three more years along with great recruiting classes coming in the future, we have no doubt Denver is bound to be back at nationals in the years to come.