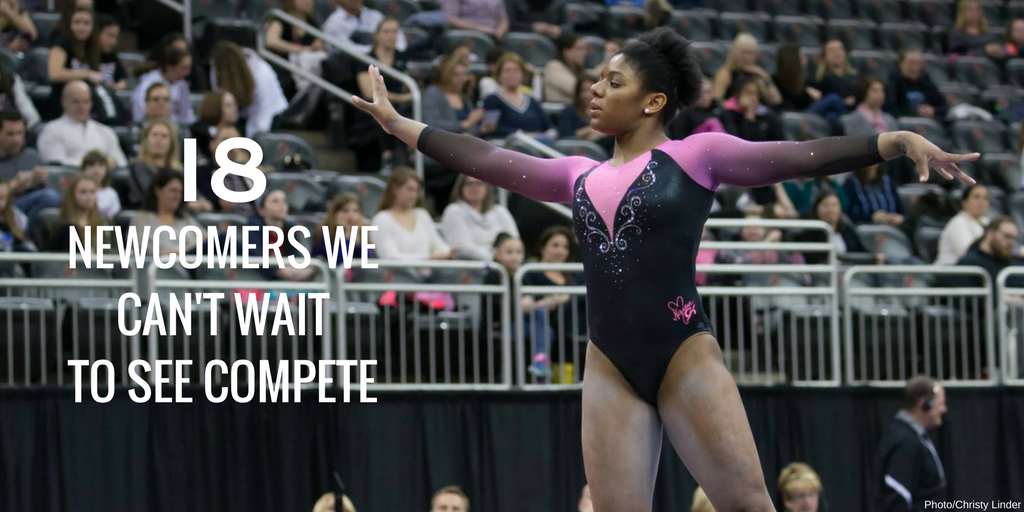 ​The end of another season means it won’t be long until the freshmen start arriving on campus and training to make their mark on their chosen programs. While we can’t wait to see a whole bunch of these newcomers compete in 2018, there are 18 in particular we are stoked to watch in the NCAA.

Kyla Bryant – Stanford
We are SO excited for Stanford’s incoming class and believe they will give the Cardinal a much-needed boost after a rough 2017 season. Bryant is the 2016 Junior Olympic National champion in the all-around—and on beam and floor—and has attended J.O. Nationals multiple times. She will bring power and consistency to the Cardinal and should be a treat to watch on floor.

Bailie Key – Alabama
Key has been a long-time gymternet favorite for her lovely lines, floaty bar work and gorgeous execution. At Alabama, she will be a great asset in replacing routines lost, particularly on bars and beam. She has struggled with injury some since turning senior, but she seems to plan on returning to elite competition this year after cutting her season short in 2016. A former junior elite national champion, Key has won many international all around titles and has taken first in every event at various major international competitions, including the City of Jesolo Trophy and Pacific Rim Championships. If she’s at full strength, she should be able to immediately contribute to each event for the Crimson Tide, but bringing her in on bars and beam, where the team has lost at least two postseason routines from graduating seniors, will be most crucial.

Lexy Ramler – Minnesota
Ramler is likely going to be the new star at Minnesota and the face of the program. She is a former Elite but has been competing L10 during the 2017 season, and she will bring great skills and difficulty to the team. She has a double arabian and an open half in half out on floor, but she also trains some fun ones like a side aerial to front split scale on beam that would make the crowd go wild in NCAA. Moreover, she has one of those coveted 10.0 SV vaults, as she has competed a Y1.5 in the past. All in all, she’s a solid all-arounder that we definitely expect to see every week in the lineups for the Gophers, and we anticipate a breakout freshman season.

Rachael Flam – Stanford
Flam is another one of those “ninja L10s” coming in for Stanford next year. Just like Bryant, Flam is no stranger to JO Nationals. She won all around and vault titles at the 2016 Junior Olympic Nationals, and is a six-time JO National qualifier. She has also won the 2014 Nastia Liukin Cup and placed third at the 2016 Nastia Liukin Cup. Flam will come to Stanford with an Omelianchik vault that should be put immediately in the lineup, and will bring difficulty and consistency on the other three events.

Pauline Tratz – UCLA
Every year, Miss Val seems to recruit one random international elite with varying levels of success. Though Giuli Pino hasn’t competed yet, we expect the Bruins’ next transplant to see significantly more action. A member of Germany’s national team, Tratz helped her country qualify to the test event for Rio at the 2015 World Championships, and then to the Olympics at the test event. She competes all four events, but vault is where she helped Team Germany the most, which should also benefit UCLA. Vault has consistently been their weakest event in the last few years, so though she only does an FTY, Tratz’s clean form and great amplitude should be a welcome addition.

Lauren Navarro – Stanford
Lauren Navarro comes from the elite world, where fans became slightly obsessed with her lines and gorgeous form. Her best events are beam and floor, and alongside Bryant, Flam and Lawson, will bring much needed difficulty and depth to Stanford’s lineups.

Emily Schild – Georgia
Another former elite, Schild will be a big asset to Georgia, particularly on vault and bars. The Gymdogs have struggled with vault some in recent years, but they should greatly appreciate Schild’s power, as she’s competed a DTY with pretty good success. In addition, she’s capable of bar work as difficult as Ashton Locklear (these routines from Jesolo 2016 are nearly identical), and despite being on the shorter side, she has some nice long lines. She should be able to mitigate some of the losses to Georgia on bars even with a watered-down routine.

Nia Dennis – UCLA
It’s like she’s been around forever and now it’s finally—finally!—time to see her shine in the NCAA. With a stellar bar routine, she could be a one-event specialist and we’d be totally fine. If she can get back to her pre-Achilles level on the other events, she’ll be a force to be reckoned with in college.

Alyssa Baumann – Florida
After deferring to recover from major elbow surgery that took her out of the Olympic Trials in 2016, will we finally get to see Baumann in the NCAA? Even if she’s half the gymnast pre-elbow, she’ll still shine in college. We could watch her beam all day long and are fully expecting historic results from her on that event during her four years.

Lynnzee Brown – Denver
Denver’s going to be in a bit of a pickle after losing three seniors this year, all of whom contributed to postseason lineups, and two of whom were vaulters. As we all know, Denver is infamous for only putting five vaults up, but hopefully this freshman class can change that. Lynnzee Brown’s vault and floor work should fit right into the weak spots left by Denver’s outgoing seniors. Brown should slide right into the lineup ahead of Karr, closing out the rotation with a one-two punch of gorgeous Yurchenko 1.5s.

Megan Skaggs – Florida
Often overlooked as Florida always pulls in the top-name, former elite recruits, Skaggs is someone to keep an eye out for in college. Her style is perfect for the NCAA and her style is similar to that of Bridget Sloan. Remember her? Steady and solid on all the events, Skaggs’ beautiful leaps and clean form will surely stick out to hardcore gym fans and casual viewers come 2018.

Abigail Matthews – Oklahoma
A former elite turned ninja Level 10, we expect Abigail Matthews to fit right in at Oklahoma. A 2016 Regional champion on bars and beam, she should slide right into the gaps left by bars queen McKenzie Wofford. Though her handstands may not be perfection yet, KJ Kindler has a way of taking good foundations and turning them into perfection, as evidenced by OU’s bar lineup this year. Matthews will likely be no exception.

Jazmyn Foberg – Florida
The gymternet got a nice little surprise after a week of drama when Foberg announced she would be graduating high school and starting at Florida a year early. The former junior national champion is a star on floor and has the floor and big skills to break right into the Gators’ already-packed lineups. Despite being a freshman, and a young one at that, we fully expect Foberg to make a run for SEC FOTY from the start.

Kyana George – California
George is a two-time Nastia Cup qualifier and multi-time top three J.O. nationals AA finisher that will provide some much desired reprieve for Cal after a season riddled with injuries and then losing a large senior class with many contributing routines. While she doesn’t have a weak event, George excels particularly on beam and floor and should continue to do so next year in Berkeley.

Ava Verdeflor – Penn State
Penn State has had a time of it for the last few years, but with the impending coaching revamp and a great incoming class, we’re hopeful for a fresh start for the Lions. Ava Verdeflor should play a key part in the latter factor, as a WOGA-trained elite representing the Philippines at multiple international championships, including Worlds in 2015. She led her country to a team bronze at the Southeast Asian Games in 2015, in addition to an individual silver on bars. In addition to bars, her best event, she should also be an asset to PSU on floor, where her sassy choreography and lovely leaps are sure to please.

Alma Kuc – California
The AOGC-trained gymnast is coming off a recent appearance at the European Championships where she represented Poland for the third time at the event. She also has a previous World Championship appearance in her repertoire. Excelling on bars, Kuc will fill the void for Cal on the event, especially after losing Amber Takara, Emily Richardson and more.

Kynsee Roby – Nebraska
Nebraska came so close to making Super Six this year, but it stands to lose a number of high-scoring postseason routines with its graduating class. A two-time J.O. National Championship qualifier, Roby’s difficulty on floor and lovely flexibility on beam should really get the crowd going and bring in the scores in Lincoln. She’s been training a full-in, and when added to her dramatic choreography, that puts her in a great position to slide right into Ashley Lambert’s spot in the lineup.

Jordan Draper – Oklahoma
After losing a massive senior class, including AA powerhouse Chayse Capps, there will be lots of voids to fill at Oklahoma. Incoming freshman Jordan Draper will be one looking to fill some of those holes, with beam and floor as her strengths. Her lovely leaps and long lines almost bring Capps to mind, and we have high hopes for her to become the next new ninja L10 at OU!