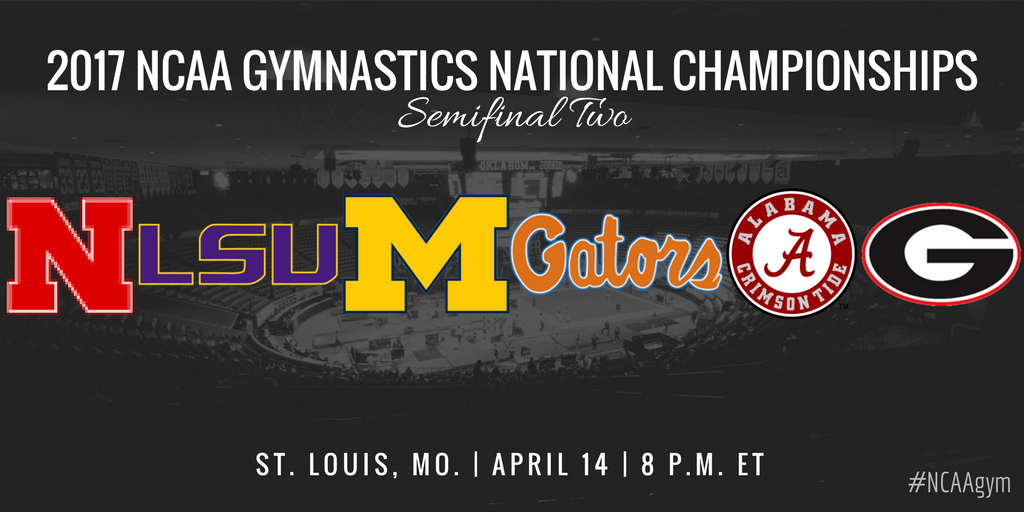 With Semifinal II featuring LSU, Florida, Georgia and Alabama, it’s practically going to be a session two of SEC Champs redux. Only this time, the stakes are higher and fraught with more peril, because there are two more challengers of equal or higher caliber gunning for the same spots. On any good day, any of these teams could qualify to Super Six, so it will really come down to who can hit, and how well can they hit, on the day it counts. ​
The title of “most likely to qualify” here goes to LSU. The Tigers have been cruising the season, keeping a steady second behind the Sooners, just waiting for the moment to swoop in and steal the title right from under OU’s nose. But it won’t get the chance if it doesn’t qualify to Super Six. As long as they keep doing what they’ve been doing this season, they should have no trouble making it. However, there can be no tripping over last minute obstacles if LSU expects to have any hope of catching Oklahoma. We’re all familiar with the Tigers’ inability to close out a season (if not, see nationals 2015. It wasn’t pretty.), so this time, there can be no sudden beam-tastrophes or sat vaults or arched-over handstands on bars. The whole team, every contributor, must be on their A-game.

Following LSU with only slightly less certainty should be Florida. All season, Florida has been chasing those top two but never able to worm their way in. They’ve scored big, they’ve had a boatload of perfect 10.0s, but what makes Florida less certain is its consistency problem. Beam has been an issue all season, with wobbles and bobbles and a few uncharacteristic falls mid-season. And just when they seemed to have figured beam out, last week at regionals saw the Gators count a 9.425 on bars. Against this kind of a field, that just isn’t going to cut it. With their current roster, bars should be one of the strongest events for Florida. They’ll need that, especially against LSU, if they want to make it to Super Six and have a prayer of placing better than third or fourth. They’ll also hope to continue making strides on vault and floor landings, particularly in those early-lineup routines.

The biggest story in this semifinal will be who grabs that third coveted spot. On their best day, any could win, but Michigan, Alabama and Georgia seem to be banking on fighting it out down to the very last routine. Michigan seems to be peaking at the right time, finally putting it all together in the same meet and getting stellar performances from their star gymnasts. The Wolverines did it to dominate Big Tens and regionals, scoring at least four tenths better than anyone else at both meets, but can they do it once more to propel themselves to their season finale? They’ll need their strongest performances from Artz, Chiarelli, Karas, McLean and Zaziski all in one night, but after missing out on nationals altogether last year, I don’t think Michigan is going to leave anything to chance if at all possible.

Alabama may have finished the regular season higher than either of the other two bubble teams, but since then, its performances have not been worthy of such an honor. SEC championships were okay, but regionals saw them almost miss out on a national berth altogether, something far beyond anyone’s imagination at the start of the season. Even its own athletics fan club on Twitter admitted that its regional performance was uninspiring and utterly baffling, which I can’t really argue with. When Kiana Winston gets a 9.65 on beam, that’s when you know something’s wrong with Alabama. Taking time in the gym to do some more pressure sets, nail those sticks and really get them confident enough to say doubtlessly that they can make it to nationals.

Georgia may have the lowest chance to make it of these three teams, but don’t be fooled. They’ve been building strength and power and they’re finally getting ready to unleash it. At regionals, they had the blessing of competing in Olympic order and notched their highest road vault total of the season. If they can replicate that success in this semifinal, that could be good enough without help from Michigan or Bama to qualify them to Super Six. A repeat trip to the finals, though, will take some work. The Gymdogs will want vault and beam to be identical to regionals. Not only were there no beam falls, but Ashlyn Broussard, who’s notorious for being inconsistent, actually tied Florida’s McMurtry for the event title! Bars, though, did have a fall from Lauren Johnson, and floor was a little lackluster, with no scores making it over 9.875. The big factor in floor scores will likely be Rachel Dickson. Will she continue to be limited to just bars? Or will she return to the leg events after her ankle injury at SECs? Her scores have almost always been higher than her replacement’s on either vault or floor, sometimes by a full tenth. If things go to plan, it will be mere tenths that separate these three teams, and Dickson’s return could put the Dogs in a much more favorable position.

Lastly, in the category of “unlikely but still completely possible,” we have Nebraska. The Huskers should be proud to have made it to nationals, having had a rollercoaster of a season and constantly dealing with a slew of injuries. Though their RQS of a high 196 is the lowest of the bunch here, their season-high 197.1s could easily overtake any of the previous three, particularly if there are mistakes. With key scores from Taylor Houchin, Ashley Lambert, Jennie Laeng and Danielle Breen, Nebraska could actually threaten here for a Super Six berth! Landings and staying on will be the name of the game when it comes to improving from regionals, but if the Huskers can have a good day while the other three have a not-so-good one, we could absolutely see Nebraska the ninja team sneaking into the finals!

Are you playing the 2017 NCAA Gym Bracket Challenge? Check up on how you’re doing here. Want to receive the latest collegiate gymnastics news in your inbox? Sign up for the NCAA Gym NewsLetter here.
FacebookTweetPin