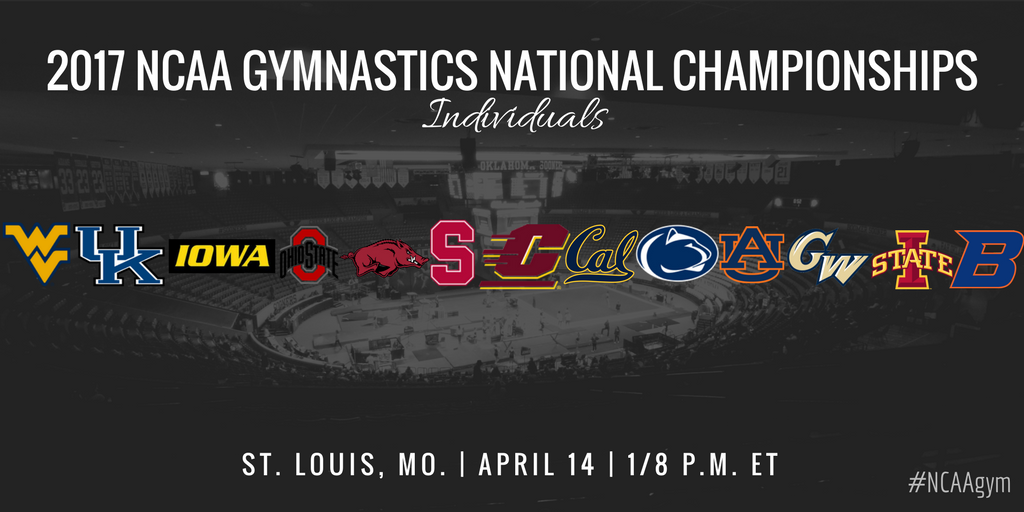 While the standard response is “it’s all about the team,” individual event titles will be given out at the NCAA National Championships in St. Louis, this weekend. Champions on vault, bars, beam, floor and all around will be crowned as well as the top eight from each semifinal combined earning first-team All-America honors and those placing ninth to 16th will be named second-team All-Americans. While each of the 12 teams will put up individuals capable of winning the titles, a number of individuals without teams also qualified to compete in Missouri. It’ll be a tight race, and really, whoever is on top of their form on that given day will walk away national champion.

While the all around competition may seem fairly obvious as to who will contend, you never know what will happen on meet day. One fall or even an out of bounds or uncontrolled landing could be the difference in first and being completely off the podium.

Oklahoma’s Maggie Nichols is hands down the individual with the best chance of finishing on top of the podium with a hit meet. The Big 12 Freshman of the Year won’t even have to put up an unusually good performance to put herself on top as scoring in the 39.700-range was a regular occurrence during the regular season. In fact, she only scored below 39.725 once the entire season—a 39.675 against Auburn back on Feb. 10. Although she sat out a number of meets toward the end, nursing a sore knee, she showed no rust coming back into the all around at regionals, posting a 39.750.

MyKayla Skinner is the most likely challenger to Nichols in the all around competition. She, too, has the potential to go 39.700+ across four events but that’s more of a great score for the Ute rather than something she does on a regular basis. The 2016 Olympic alternate is incredibly consistent, not having a missed routine in 2017 and scoring above 39.500 in every meet but one this season. Her only downfall could be tighter scoring as her scores have dipped ever so slightly in the post season due to more judges and stricter evaluations.

Rounding out the trio of freshman contenders is Madison Kocian—although she is more of a dark horse than a true contender for the all around title. We all know the Olympic gold medalist can hit a bar routine and nail her skills on beam. It’s vault, where she only performs a Yurchenko full, and floor where she is at a slight disadvantage to the previously mentioned gymnasts. However, one equalizing factor could be that all three compete in the same session at nationals and will be evaluated, hopefully, on the same level.

There are a number of non-freshman contenders that could make a real run for the podium if not the title—even if the freshmen make mistakes. Sooner Chayse Capps is a consistent 39.500 in the all around and has been right there on the occasions Nichols hasn’t competed all four. With strong beam and floor numbers, the only thing potentially keeping her total down is where or not she sticks vault and if she has a solid bar routine. Alabama’s Kiana Winston is also a strong contender on one of her good days, capable of 9.95+ on bars, beam and floor. Florida’s Alicia Boren, McMurtry and Kennedy Baker are all strong contenders as well with McMurtry being the most-likely Gator to take advantage of an opportunity in the individual competition, assuming she competes floor. LSU’s Myia Hambrick, while not on the very top of her game in 2017, is the national runner-up from 2016 and can score big on a good day. Finally, Oregon State’s Kaytianna McMillan, Denver’s Maddie Karr, Michigan’s Nicole Artz and Korth are all strong contenders as well.

The vault competition will almost certainly come down to who sticks their 10.0 start value vault the best. While it’s not necessarily going to be a Yurchenko double or one and a half—or front handspring pike half—that wins the title, the possibility of a 9.95 SV vault winning is slim as it would almost certainly have to be perfect to challenge. Arkansas’ Braie Speed, Central Michigan’s Delle Pedrick and George Washington’s Chelsea Raineri all qualified as individuals on vault from regionals.

We will have quite a few double-twisting Yurchenkos in St. Louis this season, a feat not seen as much in past years. LSU’s Ashleigh Gnat, McMurtry, Skinner and Pedrick all perform the vault with Gnat holding the No. 1 position on the event and scoring a perfect 10.0 three times in 2017, including at the SEC Championship. McMurtry also has a perfect mark for her DTY, which she scored on the road at LSU. Skinner, while never scoring a 10.0, also has a strong DTY but is not as good at sticking the landing as the previous two. Pedrick, perhaps the most surprising with the difficult skill, only debuted hers for the first time at regionals, promptly scoring a 9.9, tying Skinner and advancing to nationals. If she sticks, she could contend for the title as her form in the air is solid.

As for the gymnasts with Yurchenko 1.5s, Nichols is probably the best at nailing the landing, sitting No. 2 on the event and having two perfect 10.0s to her name this season, including one at the Big 12 Championship. Fellow Sooners Brenna Dowell and AJ Jackson can also score extremely well with sticks, and Karr and Michigan’s Emma McLean have a strong 1.5 as well as Georgia’s Sydney Snead, who rivals McMurtry on form in the air. Finally, there’s Rachel Slocum, who is one of the few with a non-Yurchenko vault. Slocum, who competes a front handspring pike half, nails the landing almost every time and can score big even when she salutes herself out of a true stick. But like it was mentioned above, it’s really about who hits on the day of the competition—Ruby Harrold could have another of her great sticks, score a 9.95 while others hop and win the title, for example.

Let’s start by getting something out of the way: Thank god Elizabeth Price qualified to nationals. And, if the gymternet has any say, she should win the national title. But it won’t be easy. Price’s routine is near-perfect every time, so the only thing holding her back is whether or not she hits her landing and those that compete after her as she will do her one routine in the third rotation of session two. Auburn’s Samantha Cerio also qualified on bars but isn’t as strong a contender as Price.

As for the individuals with teams, we have a number of competitors who have been perfect in 2017, including Nichols, UCLA’s Kocian, Kyla Ross and Peng-Peng Lee, Oregon State’s McMillan, Oklahoma’s McKenzie Wofford and Nicole Lehrmann and Florida’s McMurtry. And, honestly, any of those gymnasts could have a chance at the title. It’ll mainly come down to handstands and landings as those that nail each of them will surely walk away with the title—can they all win??

Like beam, we have a number of gymnasts with perfect marks in 2017 who could contend for the title. However, beam is its own beast as a single wobble in a r
outine can take an individual out of contention. Iowa’s Clair Kaji, California’s Desiree Palomares and CMU’s Katy Clements all qualified as individuals on the event.​UCLA’s Katelyn Ohashi sits at No. 1 in the country, having scored two perfect 10s this season. Nichols, Capps and Ross also have 10.0s on the event. But a number of others have been close and can take the title as well—including Finnegan, Alabama’s Nickie Guerrero, Winston, Oregon State’s Maddie Gardiner, Gnat, McMurtry, Denver’s Julia Ross and Washington’s Joslyn Goings or Hyland—so this even might really come down to which of the contenders competes the latest in the day.

For example, seven of the gymnasts mentioned above compete in session one, so that could potentially give a leg up to Finnegan, Guerrero, Winston, McMurtry or Gnat—who will be the penultimate competitor on beam—a leg up to take the title.

Floor should be another tight fight for the title with the best-hit landings and even how the judges are feeling that day being the determining factor. Skinner and Nichols are both tied at No. 1 on the event, each with perfect marks in 2017. Jackson, who sits in the third position, is another legitimate contender, especially now that she performs an E-pass to open her routine. Gnat, Baker, Winston, Artz and even Kocian are all gymnasts that have consistently scored high this season and could challenge for the title—Gnat, Artz and Baker all have 10s in the past.

Then there are some gymnasts with outside shots, who have maxed out around 9.950 but can contend with strong routines or missed from other top routines. These dark horse routines could come from Georgia’s GiGi Marino, Capps, Alabama’s Aja Sims, LSU’s McKenna Kelley and Hambrick, UCLA’s Hallie Mossett, Denver’s Nikole Addison and Karr, and McMurtry (if she competes floor).

Are you playing the 2017 NCAA Gym Bracket Challenge? Check up on how you’re doing here. Want to receive the latest collegiate gymnastics news in your inbox? Sign up for the NCAA Gym NewsLetter here.
FacebookTweetPin