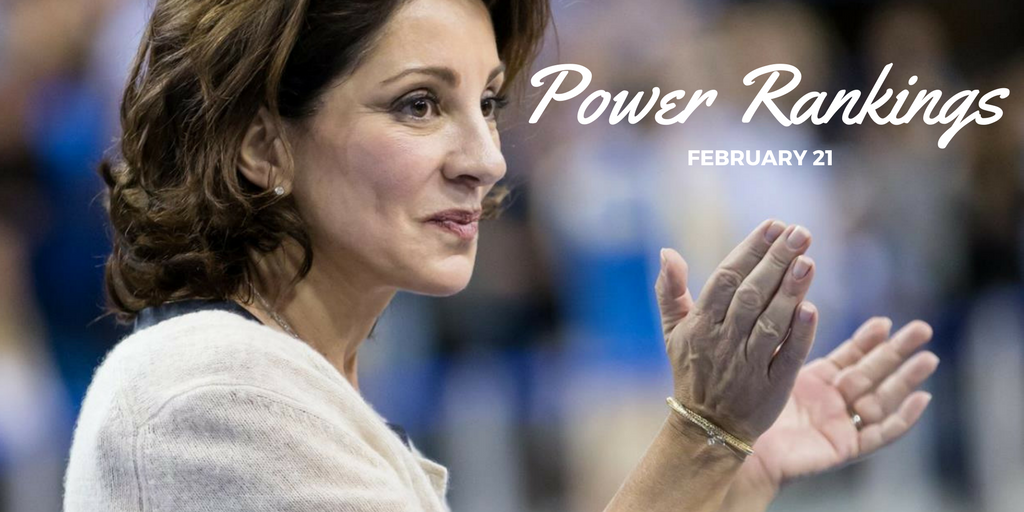 It’s time for another round of NCAA Gym News Power Rankings. This week we’ll be coming up with our top 11 teams and assigning them each a Superhero we think best fits its season up to this point. But we don’t expect you to agree with our opinions 100 percent. Let us know your thoughts and who you have in your top 10 in the comments or on social media.

If you’re a traditionalist or numbers freak, you can look at the Road to Nationals official rankings here.

Oklahoma is dominant right now. Its uncanny ability to hit routine after routine, week after week is only getting stronger, which leads us to liken it to Superman. Superman is the superhero everyone knows—in some languages, his name has become a generic term for anyone “super.” If it wasn’t already, Oklahoma is quickly becoming a household name, and it’s certainly synonymous with super. It’s consistently the best in the country right now, with a variety of remarkable, versatile powers, and seemingly without a single weakness. The Sooners can only hope that nobody discovers their Kryptonite!

​Similar to Superman, Captain America is a powerhouse. He has many different kinds of powers with no clear weakness, a rich and storied history, but he comes from a different crowd than Superman. Much in the same way, LSU and Florida have both posted very high scores, have no one pinpointed weakness, and are similar in strength to Oklahoma. However, they are still coming up just a bit short, just as many predict that if Cap and Supes were to get in a fight, the Man of Steel would come out on top.

​UCLA has the potential to be great, what with all of the former elites and Olympians on the roster, but the team just isn’t there quite yet as seen by the 195 in its latest meet caused by resting starters and replacing them with less experienced backups. Wonder Woman is a well-known superhero and glam as all get out but isn’t the top in many people’s eyes. She’s waiting for her big moment to step into the spotlight. While UCLA is in the spotlight a lot, it’s not in the national champion spotlight which is really all that matters in this case.

​These teams have been around the national champion conversation for as long as anyone can remember. They have titles under their belts and somehow always manage to stay near the top. But with some up-and-down struggles this year, including some upset losses as well as HUGE wins, we really don’t know what to expect from them come postseason. Spider Man was huge at the start of the 2000s with movie after movie, sequels, spinoffs and more movies but has since died down a bit and been replaced by the likes of other, trendier superheroes. While still a favorite in a lot of people’s eyes, Spider Man isn’t the top of the top anymore.

​Georgia has always been one of the powerhouses of NCAA Gymnastics especially in the 90s and early 00s, but hasn’t been able to keep up with the new kids on the block like Oklahoma or LSU and fell out of popularity. Similarly, Iron Man also has known its share of popularity early in its history, but was forced to face a fall out against the likes of newer, younger superheroes like the X-men or Spiderman. Once Iron Man was revived with the movie in 2008, its popularity skyrocketed. Much like this, Georgia and Boise State are enjoying a comeback and creating upsets all over the country. Both teams have done pretty well on the road and at home, but they also both need to step it up to the next level to really challenge for a spot in the Super Six. The Broncos skyrocketed through the rankings thanks to their record-breaking performances and now look to be solid contenders for a spot at nationals. The Gymdogs have also climbed through the ranks thanks to mostly the RQS system, but also surpassing expectations in what many expected to be an off-year for them until next year’s recruiting class came in.

​All of these teams are always expected to do well, but most have gone above and beyond and have surprised us all. The Wolverines had to come back from a disastrous regionals story last season, but so far have shown than they are ready to contend for a spot at nationals. Denver was expected to be on the rebound after graduating Nina McGee and with a very small roster. However, the Pioneers have put up incredible performances and have maintained a higher-ranking than last season so far. Kentucky is a bit of the cinderella story, especially with the arrival of Mollie Korth, and nobody expected the Wildcats to do so well this season. Finally, Washington had undergone a coaching change, and it’s always a big unknown during the first season of a new head coach. Much like these teams, Invisible Woman had troubles at first controlling her own potential and power, and not many people paid attention to her. She’s a member of the famous Fantastic Four, so she’s expected to play the part and impress, but she lived in the shadow of the men around her (or you know, big gymnastics powerhouses in our case). Once she got her power under control, she became confident and slowly made a name for herself, exceeding expectations and proving that she should be a part of the conversation too, just like our four teams in this tier. And just like her, these teams have the power to become invisible once they compete on the road. Kidding… But really, these four schools have had troubles on the road and need to hit better if they want to improve their RQS in the next few weeks.
Want to receive the latest collegiate gymnastics news in your inbox? Sign up for the NCAA Gym NewsLetter here.
FacebookTweetPin