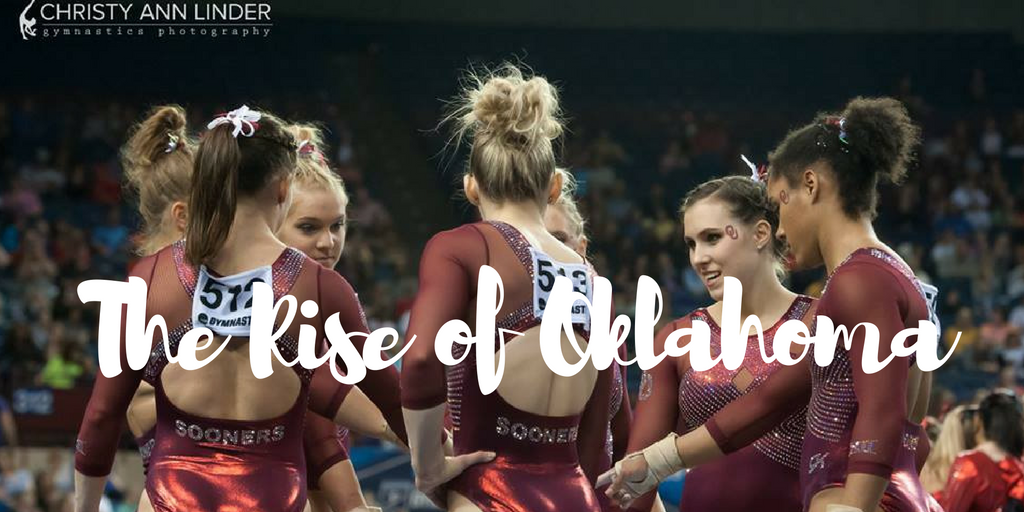 From season to season, things change in NCAA gymnastics. Seniors graduate, others medically retire and new freshmen enter college, looking to have a huge effect. Other changes are coaching related, such as retirements, promotions or moving to a new program. All these new adjustments can lead to a season of great success or great disappointment.
​
The Oklahoma program has grown progressively stronger since its humble beginning in 1981. Paul Ziert was the coach of both the men and women’s program and only a high school gymnastics coach when he was hired to take over the program. And the Sooners were short on facilities as well, practicing in an old movie theater with a leaky ceiling.

It was endanger of being cut before he took the reigns, but in the late ‘70s, he recruited and coached Bart Conner to two national championships. The arrival of Conner turned the sport of gymnastics into an emphasis in Norman, Okla., and the team received more attention.

Becky Switzer took over from Paul Ziert and coached from 1984-2001. Along the way, she won the Big Eight Championships eight times, appeared in 16 NCAA regionals and took the team on three trips to the NCAA National Championship. During her 18-year tenure, she compiled an impressive 227-105 record, coaching 1988 Olympian and two-time Honda Award winner Kelly Garrison Funderbunk (Steves) along the way.

Steve Nunno, who is most known as the personal coach of Shannon Miller, earned the head coach title in 2001 until Iowa State’s K.J Kindler came in and transformed the Sooners into the dominant, artistic and unstoppable defending national champions they are today.

This does not happen overnight. In fact, it was not until 2010 that Oklahoma made it to the Super Six for the first time. The program has had 64 All Americans, 11 conference titles and 13 NCAA championship appearances. During this time period, the gymnasts’ individual scores have also risen. As more individuals finished in the top 25 on each event, the higher the team scores grew. This allowed it to place higher and ultimately win competitions.

the top 10 on bars finishing ninth, and on floor they finished No. 12. Instead of having one or two super stars the Sooners improved due to more supporting routines and overall improvements.

Steve Nunno, the previous assistant and co-head coach was now the sole head coach. His goal was to make Oklahoma a top program and to secure its first national title. He was responsible for winning the 2004 Big 12 title, and in 2005, he had equaled the school record for the most wins at 19. He had a great deal of experience with USA Gymnastics over the years, which had a huge benefit to the team.

During the time Nunno was there, Nebraska and Iowa State were the Sooners biggest competition. In 2003 Nunno led the team to a record five consecutive scores over 197. This was the first time in OU school history that it consistently scored above the benchmark total. However, it fell short at regionals and did not make nationals that year.

K.J Kindler took over in 2007 and has made the program what it is now. The previous coaches laid the foundation, so she hit the ground running and never looked back. Kindler was the assistant coach at her alma mater Iowa State for nine seasons and head coach for six, leading the Cyclones to their only Super Six appearance. She became the only coach to ever take two different teams to the Super Six in 2011 when the Sooners qualified for the first time, finishing third and inside the top 10 on all four events.

Even though the Sooners will be graduating some key players, the foundation has been laid for years to come. They have the talent of world champion Maggie Nichols, and Brenna Dowell will return from her deferral. All signs point to Oklahoma continuing to rise.