Skip to content
FacebookTweetPin
Despite the elimination of event finals, the battle will still be fierce for those individual event titles as well as the all-around crown. Gymnasts from teams as well as those competing by themselves in Fort Worth, Texas will have a fighting chance to stand on the podium at the end of the day.Individual titles will be given to those gymnasts with the highest score after two preliminary subdivisions of competition. The results from session one and session two will be combined and the highest score wins. This criteria will also be used for All-American team determination. The top four gymnasts from each event, including ties, from each session will earl first-team All-American honors while those that place fifth through eighth will be named second-team All-Americans. 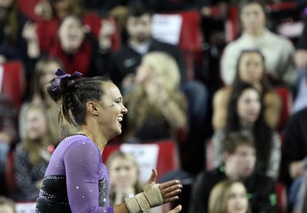 But with an event like vault, it will really come down to who hits their landing on competition day. It won’t matter if Ashleigh Gnat scored two perfect 10s on the event this season if she takes a huge step back on Friday. However, the title will most likely go to a gymnast with a 10.0 start value vault unless one with a Yurchenko full absolutely nails her attempt and scores a “perfect” 9.95. 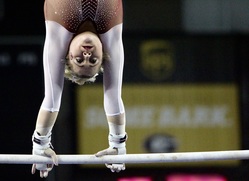 With nearly flawless routines every single week, Wofford is a shoo in for the title if she does what she’d been doing every other week this year. It won’t be easy sailing, though. Stanford’s Price is phenomenal on bars, and many think she’s been robbed of a number of perfect 10s this season. If she hits, she could challenge for the title as well.

Rogers had a perfect 10 coming. It was just a matter of time until she scored one. However, she did it on the wrong event. A bars queen, Rogers ended up scoring the mark on vault in 2016. However, bars is where she really shines and will be looking to bounce back from a couple of slip ups on the event and potentially take the title in her senior season with Georgia.

McMurtry’s bar work is probably the most-talked about and controversial of the group of top contenders. With two perfect 10s this season, the judges think she’s good enough to hang with the best of them. But bars is actually McMurtry’s weakest event. Her form is somewhat orthodox — with a more piked shape than most. Her position at the end of Florida’s lineup, though, will give her an edge. Receiving a boost from Sloan, McMurtry could capitalize of score building and steal the title away from another more expected gymnast. 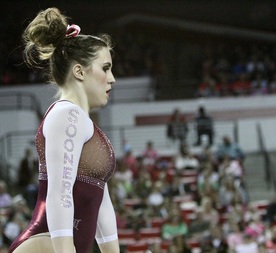 But Francis will be waiting. The duo spent a good portion of the season tied at No. 1 in the country. Both have a perfect 10 and both are hitting machines that anchor the lineup. It really could come down to what the judges are feeling and how the gymnasts perform on Friday.

McMurtry is also a quiet, consistent gymnast. Finnegan has had her ups and downs, but it capable of a big number. However, she’s maxed out at 9.925 this season. It’ll most likely take more to win the title in Fort Worth. Sloan is a bit of a wildcard, which isn’t something that’s normally said about the Gator. Sloan has been hit or miss this season. She’ll either score a perfect 10 or fall. So if she hits, she’s in contention for the title. But if she falls, there’s no telling what will happen as it’ll have more repercussions than just losing the beam title. All around, a spot in the Super Six and other factors will be at risk. 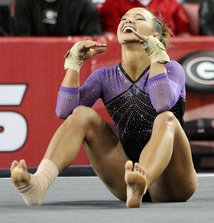 Just like it’s time for Capps to be beam champion, it’s past time for Queen Nina McGee to win that floor title. It’ll be harder for her to do so without her team by her side. She’ll have to rely on the judges, her entertainment factor and her power to get her the score she deserves on Friday. She’ll have many things going for her, as she’ll not only compete in the second session but will go to floor fifth rotation with only Utah and Arkansas’ Amanda Wellick to perform on the event after her.But there are other strong contenders. Gnat has been the most dominant on the event this season in terms of scores with five perfect 10s. However, with six judges at nationals, small form errors that often go unmarked in Gnat’s routine will almost certainly be deducted.

Nicole Artz is in the running for the title as well, but is in a similar position as McGee. She won’t have her team to help build the scores before her, so she’ll have to rely on her own talent and execution to put up a good score. Oklahoma’s Scaman, Florida’s Sloan and Baker and UCLA’s Bynum also have high scoring potential. But competing in the first subdivision may play a small factor. 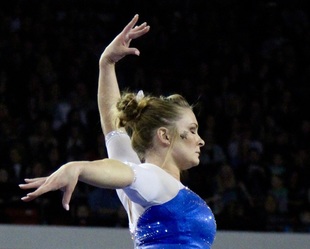 Capps has been the surprise four-event gymnast of the season, making her way into the bars lineup and proving to be an all around threat for Oklahoma. Funnily enough, her bars have been one of her strongest events in 2016, so capitalizing on that event as well as nailing her standout beam routine will be crucial to increasing her chances at winning the title or at least finishing on the podium.

Hughes, Mable and Atkinson are all in contention as well, with solid events across the board and no real weaknesses. Mable has been a bit inconsistent this year in comparison to seasons past, falling occasionally on bars, beam and floor, but a hit could put her on the podium in her final year.

Price is thought to be the best gymnast in the country by a large contingent of people. Capable of perfect 10s on at least two if not all four of the individual events, the sophomore is only limited by the judges’ ability to envision deductions no one else can see. Her beam can also get a bit 9.8-y depending on how she performs her double pike dismount. However, with major hits on vault and bars and a 9.9+ on floor, it ends up not really mattering most of the time.

Others in contention include Denver’s McGee and Georgia’s Jay — who can both be limited by their beam scores — Florida’s Baker — who’s bar dismount is a bit precarious — LSU’s Hambrick — who relies on what her team does before her sometimes for big numbers — and Michigan’s Artz — who could be limited by the absence of a full team in Texas.

Like the other events, the title will most likely go to the gymnast that’s on that day. It will be very difficult for anyone without a full team to challenge, though landing on the podium is a real possibility. The subdivisions may also play a role. However, history does not prove the theory that scores rise from afternoon to evening session. Read more about the numbers behind that on The Balance Beam Situation.