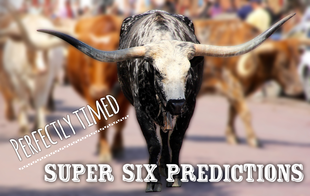 In our last Super Six Predictions before the NCAA championships this weekend, we take one more guess at which team we believe will extend their season one more night and compete in finals. At this point, we have all the information we need to make an educated guess as to which teams will qualify. However, nothing’s set in stone. There’s bound to be some sort of upset — like always.Spencer
Semifinal #1: Florida, LSU, Georgia
Semifinal #2: Oklahoma, Alabama, Utah
Winner: Oklahoma

Since I’ve been predicting Michigan to make Super Six all season long, it’s only appropriate that I stick with it all the way to…oh. Oops. Michigan’s elimination at the hands of the beam witch means that there’s a fairly wide open race to join presumed qualifiers Florida and LSU in advancing out of the first semifinal. So little separates Auburn and Georgia—and resisting being swayed by Stanford’s traditional postseason magic is harder than coal mining—that this pick is the equivalent of chucking a Produnova and hoping. At this point, it could be Towson.

When in doubt, it all comes down to consistency, which is why I have decided to ignore that principle and pick Georgia. Auburn seems the safer pick and has proven the greater likelihood of hitting 197 this year, but in spite of Georgia’s massive trauma of a 2016 season, the team has bigger gymnastics than Auburn does and higher peak scores on every event. Georgia even scored better than Auburn on beam at regionals, just to provide another wrinkle.

I want to pick an upset in the second semifinal, but there are just too many question marks and holes on the challenging teams to feel confident that an upset will take place anymore. UCLA has more than enough talent, and the return of Peng Peng Lee to bolster a lagging bars lineup couldn’t have been more timely and necessary, but being forced to cobble together competitive and reliable scores on vault and bars finally caught up to the Bruins at regionals and exposed the multiple tenths they’re giving away to the more intact and predictable Utah lineups and deeper Alabama lineups.

At the moment, the championship appears to be a race among four teams that look the most capable of the 197.8+ it’s supposed to take to win a title: Oklahoma, Florida, LSU, and Alabama. Oklahoma is the top seed, scored the best at regionals, and has shown little indication so far of flinching or failing to continue those nation-best scores right through Super Six, while all of the rest of the favorites are exposing small-to-medium-sized cracks on key events. The team most likely to hit beam and stick bars dismount like monsters continues to be Oklahoma.

I am sticking with my previous winner. I don’t care if you think I’m insane. Oklahoma is the easy choice, but that’s boring. And if Alabama wins, I’ll look like a genius. They are finally starting to peak, and with just a few better beam landings, they could have taken the SEC title again. They still have more to give, and that is what I don’t see in the other title contenders. If the Crimson Tide can pull out all the stops and make the most of Winston, Bailey and Beers, they can win this thing.

Between Oklahoma and Florida, I think Oklahoma will end up on top. Florida did not have a great regional, which is usual, but I don’t know if Rowland will have the experience to bring them back to peak form for Super Six. They needed to be in a commanding place to really carry over the Faehn legacy, and they aren’t in that position. Oklahoma has not been immune to lackluster scoring at the end of the season, but in my opinion, they have the stronger, and more consistent, lineups.

LSU always finds a way to break the hearts of NCAA fans everywhere. I think the lower my expectations are, the better they will do. So I am just going to ignore them and silently fangirl over Sydney Ewing’s layout to two feet.

UCLA has gotten their life together this year. Praise the gym gods for viral video success and the confidence that it has given to this team. UCLA is a team that does well with attention, and when people are talking about them, they rise to the occasion. The freshmen have been doing work, and with the surprise of Janay Honest, the lineups have just enough depth to make them a contender. Having star routines is never an issue but having solid mid-lineup routines is. Also, Peng Peng is back on bars, so there is hope in this dark and cruel world.

The only change from my previous Super Six prediction is swapping Stanford in for Michigan (RIP). It is going to be really close between Stanford, Auburn and Georgia to fight for that last spot in the Super Six. But if anyone knows when to hit a meet, it is Stanford. Routines two to four are now getting into 9.9 shape on bars and beam, so they are looking to repeat their two-event destruction of last season. They won’t go quite as high as last year because Wing, Shapiro and Vaculik are goddesses. However, if they do what they can do on those events, Super Six is a reality.

Like Spencer, my previous Super Six predictions went down the drain when Michigan failed to qualify a team to nationals. What a bummer. I really though it was going to be the Wolverine’s year to finally, finally make Super Six. But alas… One thing does remain true. Oklahoma will win. And it won’t be a half-win ending in a tie like in 2014. I think it’s the Sooners’ year to win outright. It’s the only team that’s remained consistent throughout the season and has the scores throughout the lineups to get the job done when it counts. If Oklahoma doesn’t make finals, it will be the biggest upset in quite some time.

But Florida always seems to come out on finals night with something a little extra. I don’t know how other years will translate to this one with Rowland now at the helm and a questionable SEC conference championship. But you can never count out Bridget Sloan and her band of admirers — er, the judging panel.

LSU will be back with a vengeance this year after having a splatfest on beam at 2015 prelims. If that happens two years in a row after such a solid season, I do NOT want to be in that locker room with D-D Breaux after the fact. The Tigers have all the makings of a Super Six team and showed they can make it happen from what we saw at regionals. The only thing stopping them are mistakes from freshmen like we’ve seen from the Tigers in the past. It was the rookies that missed beam opportunities in 2015, so Finnegan, Priessman, Kelley and Cannamela have to keep their heads this go round.

I’ve learned to never count out Alabama. While I could totally see the Tide making a mistake and not making it, I can also see the team sailing through to finals like always. Beers has had an up and down year. Bars landings aren’t what they should be and beam has been iffy. However, with solidly-set lineups and a bit of confidence on competition day, the Tide will surely extend their season one more night.

I really struggled between UCLA and Utah. While I believe UCLA has the higher scoring potential when Francis, Lee, Ohas
hi, Cipra and others are on their game that normally doesn’t happen all at the same time. And it will need to happen all at the same time if the bruins want to qualify for the finals and prevent the finals-less streak to increase to three years. I’m going to throw all instinct out of the window and choose UCLA. Don’t ask me why because I have no earthly idea, but I’m going for it.

As for that last spot, it will really be a fight between Stanford, Auburn and Georgia. If Georgia hits beam more than just staying on the apparatus, I think it’s in. However, I don’t have full confidence that will happen. Stanford needs to kill bars and beam and not be terrible on vault and floor to have any chance. I don’t see that happening. But I am excited for this rumored Ivana Hong all-around performance. It needs to happen. Auburn’s the safe bet. And since I went wild and chose UCLA over Utah, I’m going with Auburn for the final spot. The Tigers are the strongest of the group, but can’t waiver if they want to move on. Hitting beam, bars landings and vaults to the best of their ability is crucial to success.