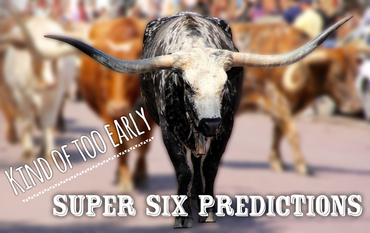 We’re halfway through the NCAA season (yes, seriously), and things are beginning to shape up. Some teams have underperformed while others have impressed. But it’s still kind of too early to predict the Super Six teams. So we’re doing it anyway.

Like last time, we’ve brought in some of the gymternet’s most well-known personalities to take a look at how the first four or so meets went and judge which teams might be competing the final night of the season and which might be taking home the top prize.

Now to reintroduce you to our pickers… Lauren from The Gymternet, Spencer from The Balance Beam Situation and Casey and Elizabeth from NCAA Gym News. So without further ado, here are our “Kind of Too Early Super Six Predictions.”

Lauren
WINNER: Oklahoma
SUPER SIX: Oklahoma, Florida, LSU, Alabama, Utah, GeorgiaAt the moment, I am all but certain when it comes to Oklahoma, Florida, LSU, and Alabama. Obviously we might be shocked by a mishap in prelims, which brought down LSU last year, but they’ve been looking so solid this past month after slowly working their way into the season, I would be shocked to see the same thing happen again. Oklahoma and Florida are self-explanatory…they’re the best, period. Whether it’s RQS, high scores, or averages, they’re the top two programs. I still think Oklahoma will take the title, something I’ve been saying since our super early predictions months ago…I was gambling then but watching them now, they’re just the better team. Florida is a mix of half stellar standout performers and half who are okay, but Oklahoma is so good, their exhibition gymnasts could anchor almost any other team, and that’s not hyperbole. Last year, Florida beat OU fair and square when the Sooners showed up looking tired at the Super Six, but this year if both hit, OU must win. MUST.

Unlike the other three shoo-ins, Alabama doesn’t necessarily thrill me, though I do enjoy most of their gymnasts individually. But as a whole…I don’t know. Not feeling it. But I’m not blinded by the fact that they’re able to put together incredibly impressive rotations on a weekly basis and can’t count them out come April.

Utah could be hit or miss, depending on the prelim they end up in…though I think with Michigan, UCLA, Auburn, and Arkansas as their likely competition, Utah is most consistently the strongest. UCLA has too many meltdowns and I think a lot of what they’re rewarded for at home will be docked at the national level on vault and bars, Auburn and Arkansas have strong performers but their rotations aren’t stacked top to bottom, and Michigan just kind of underwhelms compared to the top teams. Utah doesn’t have any superstars but they still make things work and their lineups are pretty solid. I’ll give this one to them.

Finally, Georgia, so sue me. I like an underdog. The thing with Georgia is that they’re a top 5 program on vault and bars and a top 10 on floor. Then you get to beam, and they’re 32nd because they just can’t get their lives together most of the time. But when they DO? They’re phenomenal overall. Of course, they’ve had exactly two fully hit beam rotations this season, so it’s a bit of a crapshoot, but I believe in the power of Brandie Jay and Brittany Rogers to get them through prelims.

Last time, I picked Georgia for one of the up-for-grabs Super Six slots, but the Gymdogs have not repaid my faith by instantly figuring out beam and becoming perfect gems of confident solidity. Weird. With that in mind, I’ve dropped Georgia in favor of Utah, a team that earns this spot for the moment because of consistency of 197s. I still believe that both Utah and Michigan will be vulnerable to the likes of UCLA, Georgia (and perhaps Auburn) pulling a Full Stanford and suddenly showing up in the semifinals like an inspiring beam of light, but these challengers have not earned those spots yet.

With recent performances, LSU and Alabama have solidified Super Six positions that seemed more precarious earlier in the season. They were in pencil, and now they’re in pen. Both teams are currently showing a competitive amount of 9.875+ routines coupled with a nationally significant highlight or two on each apparatus.

The frontrunners, however, remain Florida and Oklahoma, as has become the norm in the gymnastics universe. It would be a nearly unprecedented shock if either were to miss Super Six, but picking a winner between them is a challenge. I’ll take Oklahoma for the moment, less because of the stars (both teams will get 9.950s on every event) and more because of the beginnings of the lineups, which at this point look stronger than Florida’s on a majority of events and could be decisive.

Alabama – I’m going there. I’m doing it. Bama always sneaks in last minute to win big meets like SEC, so I am betting on them to pull the same thing at nationals. Alabama is the only team from the top 3 that I think can improve significantly coming into post season. They legitimately have five or six 9.9+ scores on bars, beam, and floor. Vault is the one place they will need do some big work before Super Six. Bama doesn’t have the 10SV vaults that other teams do, so sticking the landings is essential. They are getting Carley Sims back into the lineup, which will put them in a better place on floor. We also have only seen Lauren Beers hit her potential once this season at Florida. I think coming off her two near perfect routines last weekend she will be in a great place to hit a 39.6ish AA score at nationals.

Florida – This is a lock for me, and I think they have the potential to beat out Oklahoma when it comes down to it. Florida knows how to hit the big routines when it counts. All these girls are seasoned competitors and know how to win under pressure. Even with the coaching change, and the second ranking, they have the championship resume to take it all. If Bama doesn’t have the crazy upset like I’m predicting, I think Florida will take the title.

Oklahoma – Obvi. Missing Super Six is very unlikely. They are having a great season, but not as great as two season ago when they won. They are hitting all the check marks on the “we want to win nationals” list, but I just don’t feel they will win this year. I don’t think they will be able to pull out the “above and beyond” nationals performance it takes to win. They will need to not just match their season performances, but be better. I am not sure I see that happening. In my opinion, they will be in the top 3 at the meet for sure. I just don’t see the fire it takes to really win.

LSU – If they don’t, I’ll murder everyone. I think losing last year’s senior class has pushed everyone to step up. They can’t rely on Jessie and Rheagan to pull them along. Savona working back into floor is a big help, and if she can get that 3/2 vault back into shape, they will be the best vault team coming into nationals. Only the traditional LSU postseason bad voodoo can stop them from making Super Six.

UCLA – Umm… let’s all pray for this. They are having a very consistent season, which is great, but not typical. Pulling out the 9.9’s is happening, they just need to make sure the lineups have a good first 2 or 3 routines to build their score. Floor and beam are in a good place, now we need to boost up those vault and bars scores. Getting everyone healthy and mentally in shape for postseason is essential. They need Ohashi, Francis, and Peng to be at their best.

Michigan – Finally. It’s time for Michigan to make it back to Super Six. They have had the scores for it, but just get beat out by teams that pull out their best for semifinals. Michigan tends to be so consistent, but doesn’t rise to go above their standard 197.0 marker in these pressure moments. They also don’t fall below it often, but in the end
one great meet will beat out a consistent season when it comes to nationals. They need to find a way to be their best at semis.

I’m skipping merrily back to my original pick for the winner with Oklahoma. While I feel like Florida will get the Bridget Sloan bump — actually less of a bump and more of a giant shove — I think in a neutral setting Oklahoma’s the better team. Whether the judges see that on competition day is a different story.

As for the other teams, lots of interesting upsets and triumphs happened in February… Florida’s a lock, obviously. I can’t see the Gators not making the Super Six. The world would probably have to end but stranger things have happened. Alabama’s always right there as well and has proven so far that it can put up the B- or even C-team and still win meets, which is actually quite impressive if you think about it. LSU is so strong when it hits and even champion-caliber. I just need a bit more convincing on bars and beam, but for now, the Tigers are in.

I also like how Utah and UCLA are shaping up and improving meet after meet. I picked them both not only because they’ve been doing well so far, but because I have major pre-wedding, cold-feet doubts about other contenders like Michigan, Georgia and Stanford. Michigan has only reached 197 once and had a very bad, no good, rotten meet at Southern Utah. At this point, it looks like another just-missed-Super-Six season. But, please, by all means, prove me wrong. I so want Georgia in those finals. The Gymdogs are rock solid on three events. But you don’t win a title with a mess on beam like they’ve been having. Figure it out (for more than one week), and you’re in. Stanford was looking like it might begin its ascent out of the usual regular-season-Stanford slump, but injuries and limited depth will hurt the Cardinal. The talent is there to make finals, but I don’t see it happening with a handful of other teams that are more proven.