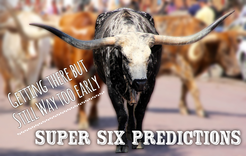 The NCAA gymnastics season is well underway with four full weeks of competition under our belts. There have been upsets, cancellations and downright surprising results so far, and things don’t look to be slowing down any time soon! Now that it’s been a month, it’s time for another round of Super Six predictions!Like last time, we’ve brought in some of the gymternet’s most well-known personalities to take a look at how the first four or so meets went and judge which teams might be competing the final night of the season and which might be taking home the top prize.

Now to reintroduce you to our pickers… Lauren from The Gymternet, Spencer from The Balance Beam Situationand Elizabeth from NCAA Gym News. So without further ado, here are our “Getting There But Still Way Too Early Super Six Predictions.”

Florida. IT’S HAPPENING. Not a single person doubts it. Naughty home-scoring aside, this without a doubt remains the top program for a reason. The Gators got off to a sleepy start at TWU but from there, have been knocking out huge routines with excellent form and great landings even four weeks in. Dealt with the blow of losing Rhonda Faehn after the 2015 season, the Gators have responded gloriously. What coaching change?

Oklahoma. The Sooners are as gorgeous as ever, and have an awesomely-balanced team with strengths on all four events. They’re some of the best beam and floor performers in the NCAA, have without a doubt the most stellar bars gymnast in recent history in McKenzie Wofford, and their 1.5s on vault already look consistent and clean. They haven’t had a bad meet all season, and their score keeps climbing each time they step out. They’ll be there for sure.

UCLA. It’s hard to feel super confident about the Bruins given their history over the past five seasons as well as seeing them drop the ball at Cal Monday night, but I really think this is finally their year again. Maybe not to take home the title, but it seems the wayward team finally has some solid footing as the stellar senior class is working big routines on the strong foundation of their walk-ons and underclassmen, including “super frosh” Katelyn Ohashi, already turning into quite the star.

Alabama. Bama is a Super Six mainstay and though they’re ranked lower than they’d like to be so far this year after some uncharacteristic bumps, they’re top-notch when it comes to talent and usually find their peak right about when it counts. I also considered Michigan for this spot, but as consistent as they are, they’ve been in a little bit of a rut, unable to break 197 even at their best, and that’s not gonna cut it when everyone whips out the big guns in Texas.

Utah. Now this spot was between Utah and LSU for me, and they’re in a similar boat. 2015 saw the departure of their best senior classes in YEARS, so there’s been heavy shuffling of the lineups for both and both have struggled on the way in. But Utah, even with the recent loss of Kari Lee, looks more promising to me as a team. LSU has some fantastic standouts, but their team vibe no longer gels, whereas the Utes are all about pushing aside individual glory to make sure the team is the focus. While LSU could put out some top individual scores at NCAAs, Utah has the edge to make it to finals as a team.

Arkansas. I’m in love with Arkansas this year. I didn’t think I’d ever say that again after three of my favorites – Casey Jo Magee, Jamie Pisani, and Kat Grable – left one after the other, but now that they’ve had their transitional years, they are showing incredible beauty and fight, upsetting Bama IN TUSCALOOSA and not letting minor errors turn into full-blown disasters. Like Utah, they’re a team first, and it’s hard to pick out individual superstars, but as a collective whole they are on fire and are my sleeper hit favorite for a finals spot.

Let’s start by addressing the giant bulldog in the room: I’m picking Georgia. Yes, I have seen that beam rotation. This pick is based on the assumption that it can’t stay horrifying all season long (right?), and Georgia has quietly put together competitive, top-six lineups on the other three events. Once beam is resolved, this is a believable Super Six team, and comparing Georgia directly to UCLA (my #7 right now), Georgia’s superior depth and vaults may end up being decisive. Utah falls out of my top six on account of the injury to Kari Lee. The Utes seemed like a borderline-competitive Super Six team before the injury, but the loss of a crucial all-arounder is enough to drop them down a few places.

Florida continues to lead the field, with the highest scores and most consistent performances in the first month, so the queen retains the crown until there’s a coup. Oklahoma and Alabama are both proving the worthy challengers we hoped they would be, with the mid-197s starting to fly, but no team has truly begun gathering forces on the outskirts of the kingdom. Yet. LSU will also be in that challenger conversation but needs a little more time to develop this roster into a title-contending one that doesn’t fall on beam so many times. Although, if there were a trophy awarded for best ability in having Sarah Finnegan compete the all-around (which there should be), LSU would be champion.

WINNER: Florida
SUPER SIX: Florida, Alabama, Oklahoma, Michigan, LSU, UCLAFlorida’s looking like a national championship team right now, and that’s not just because of the outrageous home marks it’s put up recently. I think all the judges in the country have drank a bit of the Bridget Sloan cool-aid and will see to it that the Gators win one last time for Bridget. Not to say the Gators aren’t deserving, but if it comes down to a close meet, Florida’s definitely walking away with the title.

Oklahoma and Alabama are right up there with the Gators, though. Both teams are shaping into form and are definitely Super Six teams. Both will challenge for the title come time. Michigan, LSU and UCLA have all shown weaknesses that will need to be remedied if they want to make the finals and not let other teams that have a good day slip in ahead of them. LSU needs to figure out beam and not let it become a thing because when it hits, it’s a champion-caliber team and not just finals-worthy. Michigan’s mistakes at Nebraska were just flukes, but the team still hasn’t shown it can get over the 197 hump yet. UCLA is beautiful on two events. But you can’t win a meet with two great events. Vault is getting there, but bars still has a ways to go.

From the beginning of these predictions, I had Utah in. But now without Kari Lee and the team having some trouble on some of the events, I’m taking them out of my Super Six for now mainly because other teams have looked better. They showed vast improvements on floor against Arizona, but I’m not convinced it can continue all season long just yet. Georgia is also on the bubble for me. If beam stops being something I want to close my eyes during and hope ends soon, the Gymdogs will most likely jump into my top six.