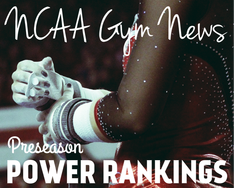 The preseason coaches poll is always a bit wonky. I mean, take a look at this year’s. Boise State got one first place vote. That alone makes you think it’s not super legit. So we decided to do our own power rankings, placing teams into five different tiers. Disagree with our thoughts? Let us know in the comments below or on Twitter.

​Note these rankings are not official. To view the official preseason rankings, visit Road to Nationals.

Tier 1: The “No doubt will make it to the Super Six barring alien abduction” teamsNo. 1 Oklahoma
No. 2 Florida
No. 3 Alabama

​These are the teams that are going to qualify to the Super Six unless their bus breaks down on the way to the meet. Even with first-year head coach Jenny Rowland, Florida will still be one of the teams to beat thanks to standouts like Bridget Sloan, Alex McMurtry and incoming freshman Alicia Boren. Oklahoma is just good, and they’re going to do well. Alabama is not as firmly in this tier as the other two teams, but made its way in partially because it never seems to not qualify to the Super Six. Alabama always seems to find a way to win championships and finish near the top without ever emerging as a clear favorite. – Emily

Many of these teams are frequent Super Six qualifiers depending on the year and how they perform during semifinals. Some of these teams are repeat offenders of beamplosions, which will quickly stop a team from advancing at NCAAs. Despite losing a few top seniors, LSU’s freshman class seems to have the potential to continue to carry the Tigers in the upward direction. Similarly, Utah lost a lot of important routines, but it is yet to be known whether the others can pick up the slack. You never really know what to expect with UCLA. They can be really good or they can be not so great. Whichever one of these happens during the semifinals will likely determine whether the Bruins compete in the Super Six. Georgia has the potential to be a top-six team this year, especially with seniors Brittany Rogers and Brandie Jay, but implosions have lately prevented it from having success. Michigan always seems to have a consistent season, but ends up falling just short in semifinals. Stanford often struggles to find depth on some events and has unpredictable finishes to its season. Last year, Stanford was defeated by San Jose State and UC Davis in its season-opener, but ended up qualifying to Super Six. ​- Emily
​

Tier 3: The “Could make nationals but could also be left home after a not great regionals” teamsNo. 10 Illinois
No. 11 Auburn
No. 12 Nebraska
No. 13 Oregon State
No. 14 Arkansas

These teams typically are the ones that qualify to the national championships one year and are left watching at home the next. It’ll really depend on the seniors lost and freshmen gained as well as how the other teams around them stack up. Auburn had quite a strong showing in 2015, and we’d like to think the team will continue to rise. But the Tigers lost a lot of crucial routines and didn’t gain as many back. Same goes for Oregon State and Nebraska. How these teams replace key seniors will be important in their destinies. Then there’s Illinois. It probably fits the description of this tier the best. Not considered a “top team” by most, the Illini still managed to qualify to NCAAs three times since 2011. And Arkansas. Remember that time it was ranked No. 1 for a good chunk of the season? Yeah. We don’t think they’re quite there yet, but a potential trip to nationals is a realistic possibility. – Elizabeth
​

Tier 4: The “On the up and up but not their year quite yet” teams

The six teams in this tier are those that fans can realistically see qualifying to nationals in the near future. But not yet. California has been coming on strong the past few years and with Toni-Ann Williams going out and killing the competition week in and week out, we think the Golden Bears will continue to rise. Denver’s also so close but so far away. Consistency issues might be the downfall for a trip to Texas, but we’re still expecting the Pioneers to send sassy senior Nina McGee out on a high note. Arizona is also on the up and up. New head coach Tabitha Yim is already transforming the Wildcats into a high-caliber program. But she can’t do it in one year. Look for a solid season but nothing to write home about just yet. Boise State lost some key players but gained a star freshman in return, so we’re betting on a status quo season for the Broncos. Then there’s Minnesota and Penn State. Both teams have dropped quite a bit in recent years with Minnesota’s coaching controversy and Penn State’s disappearing junior class act. But with both team’s back on track, they should make a strong push. ​- Elizabeth
​

Tier 5: The “Regionals will be a great opportunity for us!” teams

There’s very little chance of these teams making nationals. Unless there’s an epidemic and multiple top teams get lost on the way to the arena and/or shatter into a million pieces like mirrors, these teams will have a hard time qualifying full squads to Fort Worth, Texas. It will all come down to consistency for these five. That and getting key players healthy and newcomers to step up. Southern Utah is a dark horse. The Thunderbirds basically annihilated regionals last year and finished off the season No. 16 — and that was without standout all arounder Memory Shettles. Central Michigan is a similar team. Always hanging around in the top 18, the Chippewas are a solid but not stellar group. Then there’s Kentucky, which probably had the worst luck in the entire world in 2015. Pretty much half the team had a season-ending injury and those left over had to pick up the pieces. 2016’s got to be better, right? There’s not much room for it to be worse. Iowa State has been looking good in training and Ohio State’s always floating around the top 25 as well. ​- Elizabeth