Both Oklahoma’s Brenna Dowell (USA) and Georgia’s Brittany Rogers (Canada) were a part of teams that qualified to the 2016 Olympic Games. After 12 subdivisions of qualifications, the U.S. ranked first and Canada was in seventh. Since the top eight teams automatically receive a spot at the Olympics, Canada does not need to rely on earning a spot by finishing in the top four at the Olympic test event in April.

Dowell competed on floor, vault and bars for the U.S., but her score didn’t count toward the team total on any of her routines. Dowell competed her floor routine without music and went out of bounds on her final pass in her otherwise solid routine. Her bar routined started on a rough note when she had to redo a release and was later forced to insert an addition half turn after missing her full pirouette. Still, in both cases she stayed on the bar. However, as the routine progressed, she fell twice and only earned a 11.333. On vault, she performed a near-stuck double-twisting Yurchenko for a 15.100.

Rogers earned Canada’s highest score on both vault and bars. On vault, she also competed a double-twisting Yurchenko and earned a 15.0. She received a 14.166 on bars, and after three subdivisions, was ranked first on both events. By the time the final session of qualifications concluded, Rogers was not in the top eight on either event and will therefore not compete in event finals. It was Rogers’ first time competing beam for Canada since the 2009 world championships and she earned a 13.5.

To catch up on the social media highlights from each subdivision, click here.

UCLA’s Danusia Francis and California’s Toni-Ann Williams also competed in Glasgow, both representing Jamaica. Francis wowed the crowded with her flexibility on both floor and beam and hit all four apparatuses in competition, finishing with a 51.999 and qualifying to the test event in April. Williams also performed well, sticking her full-twisting Yurchenko on vault for a 14.166 and nailing her floor routine as well. She had a fall on bars but bounced back with a solid beam routine, which ended with a stuck double front dismount. She finished her day with a 50.531 in the all around.
FacebookTweetPin 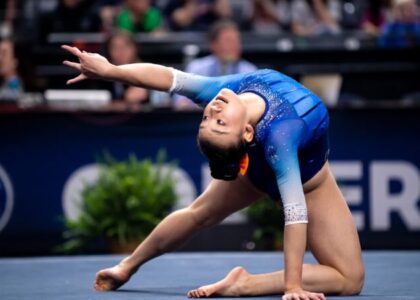 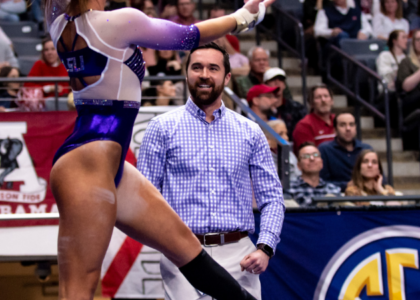