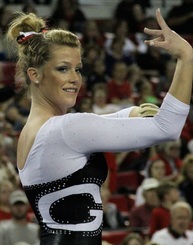 Georgia senior Brittany Rogers has officially been named to Canada’s team for the 2015 world championships. She has competed three seasons with Georgia and placed second on bars at the NCAA championship last year. Worlds will be held from Oct. 23 to Nov. 1 in Glasgow.

The 2015 World Championships are important in terms of qualifying for the next Olympics. The top eight teams get an automatic bid while the next eight advance to the test event next April. Then, the top four teams make up the remaining Olympic qualifying countries that earn full team positions at the Games.

Rogers also represented Canada at the 2012 London Olympics. She returned to elite this summer and competed at Canadian nationals in May. For the fall semester, she relocated her training to Canada and has posted videos of new combinations on bars and beam, as well as an Amanar on vault. Rogers will return to Georgia in December for her senior season while still training for the Olympics. After the NCAA championship in April, her focus will shift entirely back to elite as she trains for the 2016 Olympics in Rio de Janeiro.