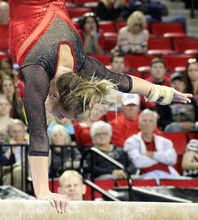 Four NCAA gymnasts are on the a nominative list for the 2015 World Championships that was released by the FIG this morning.

After deferring a year from college to train for worlds and the 2016 Olympics, Oklahoma’s Brenna Dowell is listed as one of the seven on the U.S training squad. As a freshman last year, Dowell was the runner-up on floor at the NCAA championship and became a first-team All-American on bars and floor.

Georgia’s Brittany Rogers was named to the nominative list for Canada. Rogers has relocated to Calgary for the fall to train elite. She will return to Athens in December to compete her senior season. In 2012, Rogers represented Canada at the London Olympics. The official Canadian world team is set to be announced Friday.

UCLA senior Danusia Francis and California sophomore Tori Ann Williams are both on the list for Jamaica. Francis competed in the 2011 World Championships and was an alternate for Great Britain at the 2012 Olympics but has since changed nationalities. Williams earned first-team All-American honors on vault and floor last year as a freshman.

Also on the U.S.’s nominative list are Utah signee Mykayla Skinner and UCLA signee Madison Kocian who are both deferring a year to train for the Olympics.