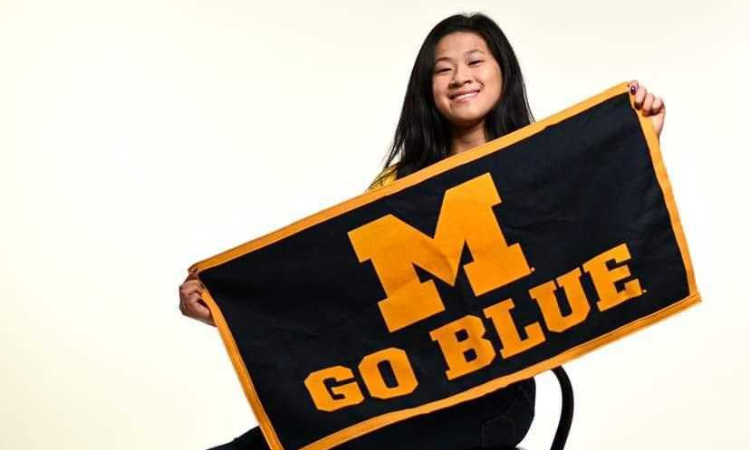 If you asked Lucie Kirchner when was the first time she dreamed of being a Michigan Wolverine, she’d reply that she can’t remember.

As the daughter of two big Michigan fans, Kirchner grew up cheering on the gymnastics and football teams, but it was only in 2017, when she watched Michigan win the Big Ten championship in person in Piscataway, New Jersey, that she began to think that if she worked hard enough, she could perhaps one day become a Wolverine herself.

The following year, after completing a successful level 8 season, she attended her first Michigan summer camp. As she was waiting in line for the gym to open, she overheard a gymnast mentioning that she’d just committed to the team. The young recruit was Farah Lipetz, who’s currently a freshman. In that moment, Kirchner’s dream to be a Wolverine became a resolution. “That was the exact moment when I decided I was going to do everything within my power to be good enough to receive an offer from Michigan,” she explained.

In the next few years, fuelled by her newly found motivation, Kirchner began to climb the rankings. In 2019, she completed a good first level 9 season, and the shortened COVID-19 in 2020 was followed by two excellent level 10 seasons, which both culminated in qualifications to the national championships.

In 2022, Kirchner achieved two of the accomplishments she’s most proud of. She qualified to the Nastia Liukin Cup at her very first meet of the season and she scored a big 39.250 at the Jaycie Phelps Midwest Showdown a month later. On that occasion, she also scored career highs on all four events.

Kirchner credits her gym switch to JPAC for these accomplishments. “Before I started training at JPAC, I had never even scored a 38, so scoring a 39 or better was not even on my radar,” she said. “That was an incredibly special night for me.”

After winning the Indiana state meet and finishing second at regionals in early spring, Kirchner was ready to produce an impressive performance at nationals, which she hoped would enhance her chances of being recruited by Michigan in the summer.

On her second event of the day, floor, however, Kirchner landed awkwardly on her very difficult triple twist opening pass and tore her medial patellofemoral knee ligament. She was devastated. She felt all her dreams come crashing down, as she believed that her chances of being recruited by any top team in the country had evaporated.

She was soon to find out, though, that she was wrong. On June 7, she was named one of College Gym News’ five-star recruits. She was excited and relieved, because before her injury, she thought she could accomplish such a feat, but after her MPFL tear, she believed it unlikely. “I was relieved and elated that you guys looked at my entire body of work,” she said.

Then, on June 15 she discovered that, despite the injury, no less than 18 colleges rang her up to recruit her. “Needless to say, I was pleasantly surprised,” Kirchner joked.

One of the colleges she spoke to was, of course, Michigan, and from the start, Kirchner had no doubt that she wanted to call Ann Arbor home. There was nothing she didn’t like about the university, but the thing that stood out the most to her was the family atmosphere within the gymnastics team. “When you commit to the University of Michigan, you are immediately part of the family,” Kirchner explained. “Everyone welcomes you with open arms, and this amazing place that you grew up loving becomes home.”

She felt immediately at ease with the coaching staff and her future teammates, but no one’s more inspirational to Kirchner than sophomore Jacey Vore, a former clubmate of hers at JPAC. “She is a great person and an awesome leader,” she said about her friend. “In addition, the way that she has dealt with [her Achilles] injury that occurred her last year of club gymnastics has been beyond inspiring to me, particularly as I am coming back from my own injury. Jacey seemed to take all of it in stride.”

When Kirchner accepted her offer from Michigan, her thoughts went to all the coaches who’ve helped young Lucie achieve her dream throughout the years. “The first thing that I wanted to do was to thank them for dedicating their lives to gymnastics and to thousands of gymnasts like me,” she said. “I am incredibly grateful for their hard work and long hours in the gym.”

There is one coach in particular, though, that Kirchner would like to remember. His name is Jozef Safko, and he was her level 8 coach at Arena Gymnastics in Hamilton, New Jersey. He died of COVID-19 at the end of 2021. “He was the coach that made me believe that I was good enough to be a college gymnast,” Kirchner recalled. “When he died, the gymnastics community lost a bright light. In his honor, I wear a ‘Live Like Jozef’ beanie to remind myself that joy and hard work are the keys to a successful life.”

READ THIS NEXT: For Lily Pederson, Oklahoma Is About Family Bond