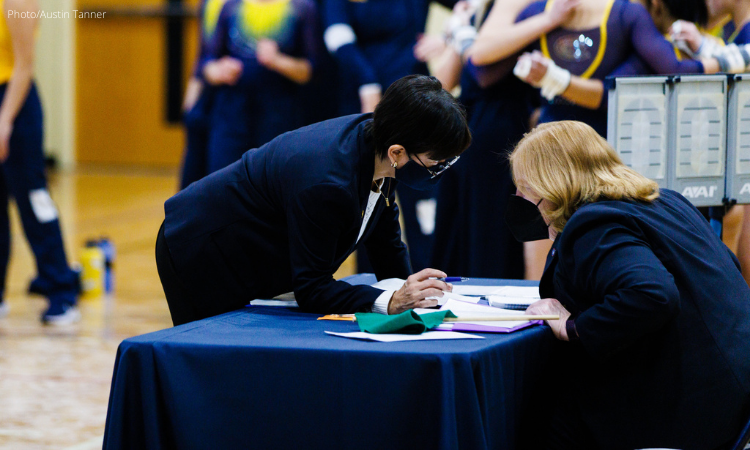 As we gear up for the 2023 NCAA season, I wanted to spend some time going over some of the most common questions fans have about how judges evaluate each event, especially those that are confusing or may not be obvious. Over the next four articles, I’ll break down the approach and most common deductions for each event, so by the time the NCAA season kicks off, you’ll be ready to apply your newfound judging skills right alongside the officials!

Deductions on the table tend to be less severe, mostly because they are difficult to see in real time unless they are pronounced. If I can see it, I will take deductions for bent arms, as well as incorrect head or shoulder alignment. During the flight phase, I focus on evaluating height, distance, dynamics and obvious body position or leg form. As the gymnast prepares to land, I watch for whether or not they open prior to landing (pike or tuck), or maintain an open shape (layout). On the landing, I look for landing shape (chest position and degree of squat on the landing), where they land on the mat and the number and direction of steps.

On vault, the athlete’s height and distance are two of the most important points of evaluation. However, surprisingly, there is little guidance from the USAG Code of Points or the NCAA Rule Modifications on when and how much to deduct. This leaves a lot up to the opinion of each individual judge.

When I evaluate height, I look for visible hip rise off the vault and that the trajectory of the vault continues upward through the initial block and into the flip or twist. Ideally, the athlete would travel along a path resembling an upside-down parabola off the table through the landing. If there is no hip rise and the athlete eats the mat on the landing, I’ll take the full five-tenths deduction in height. Everything else? It’s somewhere in between, leaving a lot of room for interpretation. I often grade the severity of the height deduction on the amount of hip rise and how the athlete is able to land. Poor landings are often a symptom of poor height off the table, since more height would translate to more time in the air to prepare a safe and well-executed landing.

Judges will deduct up to three-tenths for insufficient distance, which is evaluated based on where the athlete’s center of gravity lands after completing the vault. I do not take a deduction for distance if the athlete is far enough away that if she laid down with her arms stretched toward the table, her hands would not be under the back edge of the table. I’ll take the maximum deduction for distance if a) the athlete is so close it scares me or b) she lands next to or under the table. How much I take (half a tenth to a quarter of a tenth) between those extremes depends on how far from the vault she is based on her height, as well as the general trajectory of the vault.

Taking (or Not Taking) Deductions

We’ve all seen the vaults that are beautiful and score a 10.0, and others that are equally as gorgeous and evaluated that earn a 9.950 or a 9.900. Vault is honestly very difficult to judge because it moves so fast and is over so quickly. The judge has to mentally upload and replay the vault multiple times to get their deductions on paper, all while ranking it against other vaults they’ve seen without conflating the vaults in their mind. Spectators get the advantage of being able to watch the vault multiple times in slow motion and at different angles than the judging panel. This could lead to a perception of overscoring on vault because viewers have better tools to analyze the vaults, such as slow motion, instant replay and commentary, as opposed to judges watching in real time.

On poorly executed vaults, the deductions tend to rack up pretty quickly, as poor technique on the entry leads to poor performance in the flipping and landing phase. I’ve noticed judges not wanting to “kill” the athlete with landing deductions (like a Yurchenko full that pikes down (up to three-tenths), lands with her chest down (up to two-tenths) and takes one step toward the vault (flat tenth for under rotation and a tenth for the step). On top of that, if the athlete has to pike down to finish her vault, there are likely height, distance and/or dynamics deductions that could be applicable. Scores can very quickly drop to the low nines on a mediocre Yurchenko full, and judges are often weary of flashing low scores for fear of being seen as biased, “harsh,” or at the very least being out of range and having to conference. Without a clear or obvious execution error, most judges won’t go too low on a decently executed vault, even if they could easily justify the deductions in a conference or routine summary, especially with a sold-out crowd or a televised event.

Some other deductions that are inconsistently applied are under rotation of salto vaults (flat tenth), foot form (flat tenth in each phase of the vault), and the timing of LA (long angle) turns. Any vault that ends with an athlete stepping back toward the table should incur a tenth deduction for under rotation. So theoretically, the max score of a Yurchenko one and a half that takes one step back towards the table is a 9.800, and I have definitely seen these vaults score 9.850 or 9.900.

Foot form is really hard to see in real time, especially for layout vaults. I tend to keep my eyes at the hips, so I can evaluate height/distance/body shape while also seeing most of the arms/legs/ and head. My eyes can’t always track the toes at the same time in real time throughout the entire course of the vault—and I’d wager others also struggle with this as well.

There’s also a deduction for the timing of LA turns, with deductions for both beginning too early or too late. It’s really a subjective judgment, though, especially if you consider something like a Yurchenko half front layout versus a layout half. The only difference in the vault is the timing of the turn, and both early and late turns are acceptable. I’ve never taken this deduction when judging in the NCAA because I don’t think I can apply it fairly or consistently. Maybe I’ll know it when I see it?

Yurchenko entry vaults are the most popular style for NCAA athletes due to the technical advantage allowing athletes to generate additional power compared to front-entry styles. I’m often asked the question, “Are more unique vaults actually judged more harshly?” My answer is yes…and no.

Forward entry vaults require more “raw power” from the run and the board to produce the same height, distance and dynamics as a Yurchenko entry vault. I would wager most college judges (myself included) don’t change their expectations for height, distance or dynamics for a Tsuk layout compared to a Yurchenko layout. However, the most common Yurchenko vaults (layouts, halves and fulls) start half a tenth lower than the same vault with a Tsuk entry to recognize the increased difficulty of the Tsuk style.

During the first phase of the vault (between the board and the table), Yurchenko entry vaults are often cleaner than front entry or Yurchenko half-on vaults. Incorrect shoulder and head alignment are common technical errors that can still result in an explosive vault yet also incur deductions. For traditional Yurchenko vaults, it’s much less common to see these errors.

Leg separation is a common deduction during the back handspring phase of a Yurchenko, considering it requires a lot of strength to keep the legs straight and together. It’s also nearly impossible to see the leg separation from the judge’s seat on the side of the vault, so athletes are rarely penalized for this execution error. For turning vaults, leg crossing or separation is easily seen during the twist, resulting in the athlete incurring execution deductions where Yurchenko-entry vaults may not.

As of this writing, no guidance has been given on how to apply deductions using the direction lines, other than it is an up-to-three-tenth deduction for a direction error. According to the FIG code, it’s a one-tenth deduction for one hand or foot landing or stepping over the direction line and three-tenths for both feet landing or stepping over the line. However, the USAG code explicitly states that direction deductions are determined by the initial contact with the mat on landing. My best guess is that judges will likely follow the same guidelines as the FIG, except only evaluate where the gymnast initially lands and not further penalize the athlete for a direction error when stepping or falling over the line after landing.

READ THIS NEXT: Judge’s Inquiry: What Actually Happens During a Judging Conference?

Rhiannon Franck is a former national-rated NAWGJ women’s gymnastics judge with over 15 years of USAG judging experience and nine seasons judging NCAA gymnastics. Outside of gymnastics, Franck works at a university as a nursing professor and loves to travel. You can follow her on Instagram and Twitter.