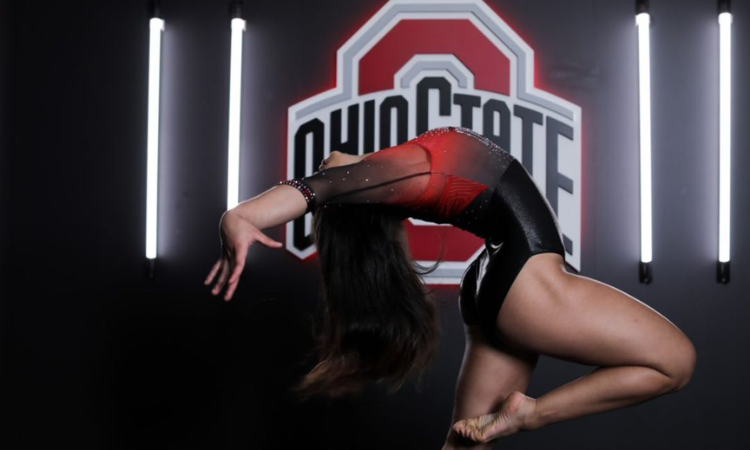 In March, when JJ Coleman received her first piece of recruiting mail from Ohio State, she didn’t yet know that she’d been contacted by her future college. The Buckeyes caught her eye early on in the process, but over the summer she explored all of her options, which also included Rutgers, BYU, Maryland, Missouri and Michigan State. She was especially interested in the latter two, but in the end they were not “where [her] heart was.”

Her heart, as it happened, was stolen by Ohio State during her official visit to Columbus. Coleman felt immediately at ease with the coaching staff, which includes head coach Meredith Paulicivic, associate head coach Lucas Wasson and assistant coach Randy Monahan, who proved supportive from the moment her recruiting journey began on June 15. “I felt so comfortable around the coaches,” she said. “That’s not something a lot of people can say, but I felt like I could tell them anything, like if I can’t push through a workout or if I’m stressed.”

Coleman also bonded with the team, who was warm and encouraging, had only positive things to say about the gymnastics program and showed off an impressive work ethic. “They train as one and work to get to a certain standard, which I fell in love with,” Coleman explained.

She was in awe with freshman Mallory Gregory, sophomores Stephanie Berger and Tory Vetter and senior Alexis Hankins, but no one had a stronger impact on Coleman’s decision to commit to the Buckeyes than freshman Payton Harris, who served as her host during her official visit. “She was able to tell me more about the team environment, and also set the truth about the coaches and the campus,” Coleman explained. “She made me feel safe and like I was family, and for sure [she] helped me set my mind on [Ohio State].”

During her visit, head coach Paulicivic told Coleman that her goal for the team for the upcoming years is to qualify to the national championships, and Coleman would love to contribute to that achievement. “I want to not only have fun but help bring this team to a peak,” she said. “My goal is to hopefully win Ohio State a ring—I think it’s worth everything.”

With two more seasons of club gymnastics to go before joining the Buckeyes, however, Coleman still has a lot to achieve for herself before college. As a four-star recruit, a national qualifier and a DI commit, she may give the impression of being a seasoned gymnast, but in fact, 2022 was her first year as a level 10.

After competing in the shortened 2020 season as a level 9, Coleman got injured and was forced to miss the entire 2021 season. It was the toughest moment of her career. “I lost motivation and felt like my world ended. I thought I wasn’t going to be as good as I was. I thought I would have struggled to come back,” she recalled.

As she eventually came back stronger than ever in 2022, qualifying to her first level 10 state, regional and national championships, though, her achievements felt even sweeter. “I’m a first-year level 10 and not a lot of people can say they made it to nationals their first year, [so] I’m absolutely grateful for the opportunity,” Coleman explained. “I put so much dedication and discipline into my gymnastics, I was beyond proud.”

Coleman credits her parents for supporting her through the difficult times and for helping her achieve her dreams. “They always encourage me to work harder than the rest because that’s what it took to get me where I was trying to go,” she said. “They are my biggest supporters, they get me to my competitions, they have given me everything to make sure I can compete and do the sport I’ve desired to do.”

Thanks to her hard work and her family’s support, Coleman can now put a smile on young JJ’s face, whose dream was to one day commit to a DI school. “We accomplished a lot more than we thought,” Coleman said. “I think my younger self would be very proud of how far we have come.”

READ THIS NEXT: Joscelyn Roberson Commits to Arkansas for 2025 Season