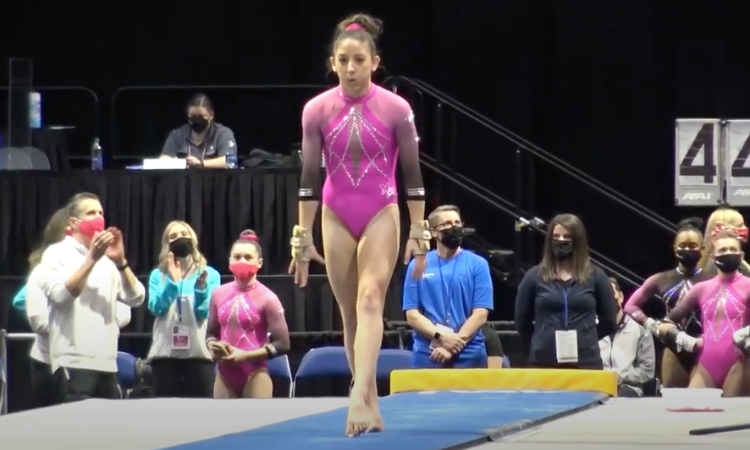 With the landmark recruiting date of June 15 now behind us, the class of 2024 has officially kicked off its collegiate recruiting journey. Although still two years out from making their college debuts, the rising high school juniors can now field calls from coaches, take visits to campuses and even make verbal commitments—meaning our future college gymnastics rosters are already beginning to take shape. That being said, it’s time to take a look at some of the recruits likely at the top of every program’s target list and highlight those on the trajectory to becoming a future NCAA superstar.

Why She’s One to Watch: It’s a given that the top recruit of each class is going to be one to watch in college, but not only is Neff the highest rated recruit of the 2024 class, she’s the highest rated recruit ever with another two level 10 seasons to go. Already boasting the pretty lines and supreme form to set her apart, it’s Neff’s knack for landings and consistency that will surely make her a star at the next level. Her work this past season garnered a perfect rating on uneven bars, and Neff could truly threaten for an overall perfect total once we rerate next year.

Why She’s One to Watch: Pederson has been a fixture on the level 10 scene since 2018 but truly came into her own in 2022, breaking the elusive 39 all-around mark three times this season and taking first place in the all-around, vault, bars and floor at nationals. Her results are all the more impressive given the level of difficulty she competes (her hop to Weiler combination is a rarity in level 10, and Pederson executes it to perfection).

Why She’s One to Watch: Ferris is a solid all-arounder to be sure, but her Yurchenko one and a half is what sets her apart from the pack. She successfully defended her vault title at this year’s nationals with a perfect 10—her third of the season on the event—as well as taking the top spot on bars and floor.

Why She’s One to Watch: Slade is a remarkably consistent gymnast, snagging five of 2022’s top 100 all-around scores and seven of the top 100 vault scores (including a 9.900 that earned her a national title). If her posted training footage is any indication, Slade has several likely upgrades in the works for her junior season.

Why She’s One to Watch: Clark earned her trio of stars primarily due to her bars and beam work where her impeccable toe point shines. Beam is where she excels most, with her calm presence and fine form winning her a national title on the event in 2021 and already putting her in contention for late lineup spots once she reaches the collegiate ranks.

Why She’s One to Watch: Exhibiting confident composure across all four events, Jackson possesses the steadiness that should transcend to the next level. She just missed the cutoff for a five-star rating this time around, but with beam as her standout event, Jackson can easily hit that mark next year with only minor improvements.

Why She’s One to Watch: The stunning, legs-together form on Hardin’s double layout helped her earn the class’s sole perfect rating on floor, where she’d already be welcomed into the lineup of basically every top 10 team. She’s a superstar leg event specialist in the making, with her Omelianchik on vault boasting a big 10.0 start value that will help her make an immediate impact in the NCAA.

Why She’s One to Watch: A current U.S. elite, Roberson possesses an abundance of difficulty on every event and will have plenty of exciting skills to bring over to the collegiate scene. With the right coach and routine construction, she could blossom into an all-around leader in no time.

Why She’s One to Watch: Smith is one of the most powerful gymnasts in the 2024 class and will make any team happy with her vault and floor. The only thing lacking from her Yurchenko one and a half is a stuck landing, and her floor exercise featuring only double salto passes is nearly anchor worthy already.

READ THIS NEXT: Underrated Class of 2022 Recruits That Had Stellar Senior Seasons