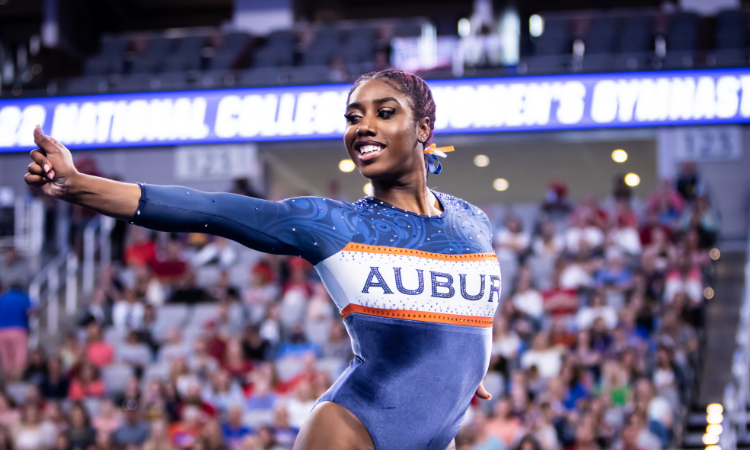 The dramatic championship showdown between Oklahoma and Florida that has lingered in our minds throughout the first few months of the offseason was apparently a sign of things to come, as the past few weeks have seen quite a few dramatic headlines hit the news feeds to keep us entertained. With so many significant developments taking place, the landscape of the 2023 season is already changing, meaning it’s time to refresh the Way Too Early Power Rankings for next season.

The early offseason has not only brought us expected news like COVID year announcements and coaching changes, but the new and still veiled transfer portal has yielded some unexpected roster modifications. That’s got Utah creeping up closer to the No. 1 spot, but for now Oklahoma maintains its position atop the rankings with its recruiting class putting on a strong showing at development program nationals, where the class of 2022 recruits recently wrapped up their level 10 careers. Natalie Wojcik and Derrian Gobourne have their programs on the rise as well, but news regarding a fifth-year decision from Trinity Thomas continues to evade us heading into the summer.

As with every edition of this summer’s power rankings, all seniors who hadn’t confirmed an extra season by the time of publishing were counted as losses. Here’s an updated look at which teams should lead the way in 2023.

With the COVID years for the senior class publicly announced prior to the end of the season, the Sooners have been enjoying a quiet offseason—one that national champions would expect. The only news surrounding Oklahoma has been good news, with incoming freshman Faith Torrez tying for the highest all-around total amongst all the development program national champions. Torrez can more than make up for what the Sooners lose from their championship team, making depth a bigger asset moving forward.

The Utes can claim one of the early offseason’s biggest surprises, using the portal to add Michigan transfer Abby Brenner to next season’s roster. The former national champion not only adds depth to Utah’s bars and floor lineups, but her Yurchenko one and a half is just the stabilizing vault that lineup has needed for years. With Brenner, a healthy Kara Eaker and five-star recruit Makenna Smith next year, the gap between the Utes and the Sooners is starting to close.

The headline we’ve all been waiting for is the one we still haven’t gotten yet this offseason, with the fate of Trinity Thomas’ available COVID season still unknown. Her decision will significantly impact next season’s outlook, but Florida is looking like a championship contender either way. The Gators join the rest of the top teams in bolstering their depth for next season, supplementing their one-women signing class of Kayla DiCello with Georgia transfer and former elite Victoria Nguyen in their biggest development of the early offseason.

One of last season’s final four teams is once again looking like a contender with headliner Gobourne’s announcement that she’ll be back for another season. Now, the Tigers barely have any holes to fill from 2022’s lineups with five-star recruit Olivia Greaves incoming to give them an added boost. After perfectly managing adding a superstar to the roster and a dramatic rise to the top, Auburn has shown it has the edge a true title contender holds.

No longer needing to replace double-digit routines, the Wolverines jump back into the top five of the power rankings after Wojcik announced she will allow us to marvel at her gymnastics for another season. For a team embarking on a revenge tour next year, the prowess of a superstar super senior will be much appreciated. However, after a quiet end of the level 10 season for Michigan’s duo of five-star recruits, there’s still a few questions as to who will fill those lineup holes. A bonus season from Abby Heiskell would give the Wolverines a big boost.

It’s been an uneventful offseason thus far for the Tigers, with the only “news” being the inferred buyout clauses added to contracts to keep their staff intact during an already chaotic coaching carousel. Incoming four-star recruit Ashley Cowan’s bars win at development program nationals is a promising sign for LSU, who often had bars issues last season, but much of the burden of returning to title contending status falls on a fully healthy superstar duo of Kiya Johnson and Haleigh Bryant.

Alabama submitted its bid for biggest offseason shocker with its abrupt change in leadership, moving from the Dana Duckworth era to the Ashley Priess-Johnston era in rather quick fashion. Even with the adjustment a coaching change brings, the Crimson Tide’s 2023 trajectory doesn’t change much as hiring a program legend was the right call (on paper) by the athletic department. Plus, touted five-star recruit Gabby Gladiuex had a successful level 10 nationals, taking her division’s all-around title.

Anytime you can draw parallels between yourself and a national champion is great, and with only good level 10 nationals results as news this offseason, the Spartans are mimicking the Sooners. Not only did five-star recruit Nikki Smith win her division and post the third-highest all-around score of the 2022 class, but unranked recruit Olivia Zsarmani showed-out by notching the seventh-highest total of the class to make Michigan State the only school to boast multiple top 10 all-arounders. As a result, the Spartans make their move into next season’s nationals picture.

It’s been a crickets-chirping quiet offseason for Missouri, but as a newbie to the top 10 that’s exactly what you want. With the numerous high-profile assistant coaching positions open currently, it wouldn’t be too wild to see a Tiger poached from this staff before summer’s end to shake things up, but that’s a very manageable amount of adjustment for an experienced roster to make if it even happens. Missouri continues to look good heading into 2023 with all the pieces of its puzzle still intact.

With former assistant Janelle McDonald moving on to the head coaching ranks, California begins its offseason in search of a new coach for its signature event in a very competitive market. Thankfully, the Golden Bears’ incoming talent should help offset the troubles that transition may bring, with four-star recruit Miki Aderinto excelling at development program nationals to cement herself as one to watch even with two international elites in her recruiting class. Keep an eye on those two elites, eMjae Frazier (USA) and Ondine Achampong (Great Britain), as they should both have big summers ahead that could improve California’s outlook.

Speaking of McDonald, she’s been tasked with the colossal duty of reviving a mismanaged, blueblood UCLA program that she helped California surpass the past few seasons. If she can right the ship quickly, she’s got one of the nation’s most talented rosters to work with and could be back on the nationals stage as soon as next season. Plus, the Bruins have five-star recruit Selena Harris on the way, who backed-up her top overall recruit status by tying the highest all-around total at this year’s level 10 nationals.

The unexpected but very welcomed sixth-year announcement from Lynnzee Brown puts Denver in a fantastic position heading into 2023. The Pioneers are already returning one of the most resilient rosters after managing a regional final appearance despite depleted lineups from injuries, are losing no routines thanks to a COVID year from Alexandria Ruiz, and get to add one of the nation’s best gymnasts back into the fold with the return of Brown. If emerging stars Rylie Mundell and Jessica Hutchinson can take it up another notch as well, Denver is going to be one to look out for next season.

With Jade Carey’s elite career still set to resume later this summer, not much has transpired yet with the Beavers this offseason outside of confirmation that Madi Dagen will be back for a fifth year. That puts Oregon State in a solid position where it can build upon last season’s improvements with few routines to replace. Four-star recruit Jennifer McMillan won bars at nationals to cap off her consistently high-scoring level 10 season and continues to look like a solution to the Beavers’ biggest problem in 2022.

The Wildcats’ 2023 roster got a lift already this offseason with Arianna Patterson’s announcement that she’ll be back for a fifth season, keeping around a crucial 10.0 start value vault and adding to the impressive depth they already had without her. Kentucky shouldn’t have much of a problem replacing only seven routines with that depth, so now it just needs to see if five-star recruit Bridget Bourque can be the complement to Raena Worley it needs to get back to the nationals stage.

With Ohio State’s trio of seniors opting to stick around for another season, the Buckeyes will be expected to repeat 2022’s top 20 finish, if not legitimately challenge for a trip to nationals. Ohio State is now losing zero routines from its postseason lineups and is adding five-star recruit Payton Harris, who just had a strong showing at level 10 nationals and will make an immediate impact with her Yurchenko one and a half. The Buckeyes’ stock continues to rise this offseason.

The Razorbacks are one of the teams who have unfortunately seen their 2023 prospects take a bit of a dive with five-star recruit Morgan Price’s astonishing switch to Fisk for next season. That raises some questions regarding filling lineup holes, but thankfully the Razorbacks’ clutch use of the transfer portal to land touted UCLA graduate Norah Flatley will certainly make an impact. Plus, it appears Arkansas will continue to have coaching stability (for now) after Jordyn Wieber was a popular name in early offseason coaching carousel discussions.

While the Cardinal is currently taking part in the bustling assistant coach market, its recruiting class had one of the best showings of any team at development program nationals. Five-star recruit Anna Roberts posted a top 10 all-around score amongst the 2022 class during her trio of runner-up finishes while four-star Taralyn Nguyen won a floor title with her exciting double E-pass routine. Both also had particularly strong outings with their 10.0 start values vaults that Stanford is in desperate need of.

The Illini’s have been on the ups this offseason thanks to fifth-year news from its senior duo and a late commitment from four-star recruit Arielle Ward. Now with no routines from last season to replace, Illinois has the opportunity to simply make improvements. After recruit Alea Byrne’s floor victory at level 10 nationals, improvements are looking very promising.

Even after losing assistant coach Kristin White to Utah State, the Sun Devils still sit in a good position early into the offseason. If the roster can reach full health by the start of the season, Arizona State should have no issues replacing the three lost routines and making the adjustment to a slightly new staff. It’s now on the upperclassmen to rediscover their top 10 form from their underclassmen days.

Some bonus year announcements from eligible seniors have helped dwindle the number of routines lost down to the single digits, but next year’s Minnesota squad will look vastly different from this year’s nationals team. Mya Hooten sticking around helps after transfer rumors swirled to start the offseason, and four-star recruit Sarah Moraw’s good showing at nationals to finish her level 10 days is an encouraging sign as well.

READ THIS NEXT: Way Too Early Power Rankings for the 2023 Season