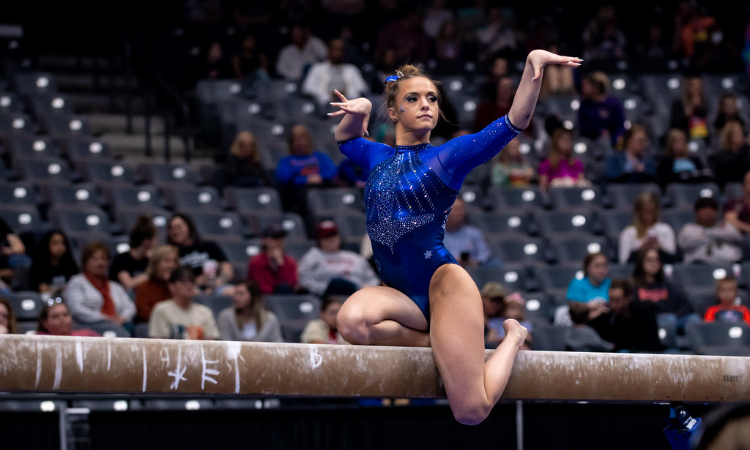 When she was a child, Josie Angeny dreamed of being a Georgia gymnast. Her most valuable possessions were Georgia knick-knacks and apparel. Her first phone case had a Georgia logo on the back, and the Georgia T-shirt she received one Christmas was “the biggest deal” to her. She also used to fly to Athens all the time, and as a young teenager, she attended every Georgia gymnastics camp for three consecutive years. Her college future seemed to be set in stone.

Then, disappointment hit. Aged 13, Angeny was offered a walk-on spot on the Georgia team but was told that she was not going to be awarded a scholarship.

The shock was great for a young gymnast whose one big dream had always been to be a Gymdog. “I was a mess for a week because I was a little 13-year-old that really thought I was going to be able to do it,” Angeny said. “I had people telling me that I wasn’t good enough to go to Georgia, so I just wanted to prove them wrong.”

With other schools offering her a full-ride, though, Angeny decided to put her Georgia dream behind her and started looking at other options. She was determined to attend an SEC school and became committed to finding a team on the rise that would one day be able to beat Georgia.

So it happened that she discovered Kentucky, which back then was ranked in the low 20s in the country but already sported such big names as Alex Hyland and Sydney Dukes. Angeny started talking with then assistant coach Chuck Dickerson, who was in charge of recruiting, and she immediately bonded with him. He reassured her of her value as an athlete and for the team and made her comfortable with her future teammates.

Angeny visited Kentucky and fell in love with it—she loved the campus, the coaches and the team. She started attending camps there and by the age of 14, she was verbally committed. “Everything happens for a reason,” Angeny recalled of that transitory time. “I was never upset with it, never too disappointed. I [had] this new opportunity now.”

By the time she joined Kentucky in the fall of 2018, Angeny was fully committed to the Wildcats. She genuinely wasn’t feeling any disappointment about her Georgia heartbreak—that chapter of her life was closed and a new, exciting one was opening in front of her.

The transition from homeschooling to college life was brutal for Angeny. She had a hard time adjusting to the change, and she was also injured when she arrived, which frustrated her, as her contribution to the team was limited. Luckily, the coaching staff was there for her, which is something Angeny remembers with a lot of gratitude. “The coaches were really there for me and helped me through a lot of academic challenges and figuring out what I wanted to do with my life,” she explained. “I matured so much so quickly.”

As she got healthier, Angeny’s gymnastics career also took off. She competed on one event in her freshman year and on three events the next. Then in her junior year, her talent exploded and she blossomed into one of the best all-arounders in the NCAA. Curiously, it was during the break imposed by the COVID-19 pandemic that Angeny got “in the best shape of my life,” working hard in the gym and setting personal and team goals with head coach Tim Garrison. “It was awesome. It was a big growing time for me,” she recalled.

Angeny remembers her junior year with great pride, as the moment when she proved all her doubters wrong. Her peaking in college, she believes, is revelatory of the strong link between success in sports and maturity as a person. Additionally, it shows that gymnastics is not only a sport for little girls—many can improve and achieve their best gymnastics in college. Today, gymnasts are required to be high school juniors to commit to college, which is a step forward compared to the time when a much younger Angeny started her recruiting process.  Her message, nevertheless, remains relevant to current recruiters, too.

“Before, a lot of schools banked on the younger girls—obviously you want to jump on girls when they’re at their best,” Angeny said. “But I think [my story] says that some girls do get better as they get older. … I had so many people tell me, ‘How did you get better in college? I don’t understand…’ And I have no idea, but I think it proves that you can mature and really change, have different goals, realize a lot and improve physically and mentally. I don’t think people expect that very much.”

Angeny enjoyed her experience at Kentucky so much that when she first heard the rumor that seniors may be awarded an additional year as a result of the pandemic, she immediately let Garrison know that she wanted to take it. At the time, she wasn’t thinking at all about transferring. She simply wanted an additional year of gymnastics at Kentucky.

Garrison saved one scholarship for a fifth year for the 2023 season, and since for a long time Angeny was the only member of the class of 2022 to want to take advantage of the extra eligibility, she assumed the spot would be hers. When another senior mentioned that she was interested in the offer, though, Angeny realized that her spot was not guaranteed and started to look around for other options. “I’m a planner. So I was like, ‘I need a backup option,’” she explained. “I was super nervous. I was like, ‘I don’t want to just not be able to do gymnastics—worst case scenario—I don’t want to do that.’ So I entered the portal mid-season.”

It was then that her childhood dream made its way back into her mind. “The minute I got into the portal, I called my club coach, Jen Fatta [of Prestige Gymnastics], and I was like, ‘Do you think Georgia has any spots open? I know they didn’t have a good year, but I really think I can help them step back up this year. They’re going to have really talented kids. I want to be a part of it.’” Angeny said. “I was in the portal already and my coach called [Georgia head coach] Courtney [Kupets Carter] and Courtney called me the next day. I never thought this would happen.”

Angeny didn’t make up her mind straight away. She took her time to weigh her options, and was in touch with other schools too, especially Arkansas and UCLA. During this time, she was amazed that coaches who wouldn’t even consider her when she was a young teenager would try to recruit her nearly 10 years later. “At first it was really surprising to me—I know I’m good enough to go to certain other schools, but it made me feel really important just having all these coaches talk to me,” she said. “I was like, ‘Oh wow! I actually have so many options, so many more options than I had when I was in high school.’”

In the end, though, it had always been about Georgia. Her commitment was an emotional moment. “I started balling my eyes out the moment Courtney offered me. I called my mom, and I was like, ‘Mom, everything I wanted when I was a kid just came true.’ And she started crying, my dad started crying,” Angeny recalled.

“[A lot of] teammates and people I knew in middle school reached out to me and were like, ‘Josie, I just started crying, I cannot believe this actually happened,’” she added. “Just because I had so many people telling me I was not good enough to go to Georgia my whole life. They were like, ‘You will strive at a smaller school,’ and they were surprised I got to Kentucky. It was a very ‘I did it’ moment—it’s not the way I thought I’d do it ever at all. I took a deep breath the moment I did it and I thought, ‘This is so cool, I finally did it.’”

Angeny will bring four years of valuable experience to Georgia, which she condenses into two main mantras: “Anyone can be a leader and anybody can have an important role [on the team], and a lot of things that you don’t think are possible actually are.”

With eight freshmen joining for the 2023 season, she hopes to help them grow in and out of the gym. “I never want people to go through the things that I went through and learn things the hard way,” she explained, referring to the fact that she had a hard time adjusting to college. “So I really want to be a leader on the team, I want to bring my experience, my knowledge of the sport and just pass my energy to the team.”

Additionally, she would love to be an All-American after narrowly missing out on it for the past two years, and she hopes to gain even more valuable experience, which will help her achieve her ultimate dream of becoming an NCAA coach. “That was another reason why I was interested in transferring, not specifically to Georgia,” she said. “I think that seeing the way in which two different programs work and being able to be involved in it will be very beneficial to me if I want to be a coach. Every team has different team dynamics in the way they do stuff—the way in that they schedule things, the apparel that they are given, the conditioning tests they have at the beginning of the year—stuff like that that I haven’t even thought about. … And with everybody knowing that I want to become a coach, I think they’ll really be able to help me.”

As she prepares to leave for Georgia and fulfill her dream, nearly 10 years after her teenage heartbreak, Angeny would like to tell 13-year-old Josie to trust herself, her potential and her dreams. And to trust that one day things will be as they are supposed to be. They just may not come to her the way she expects them to. “I would tell her,” she said, “that pushing through all the injuries, standing up for myself in the gym when I need to and doing what I think is right for my body will take me where I want to be one day.”

READ THIS NEXT: Five-Star JaFree Scott Signs With Georgia