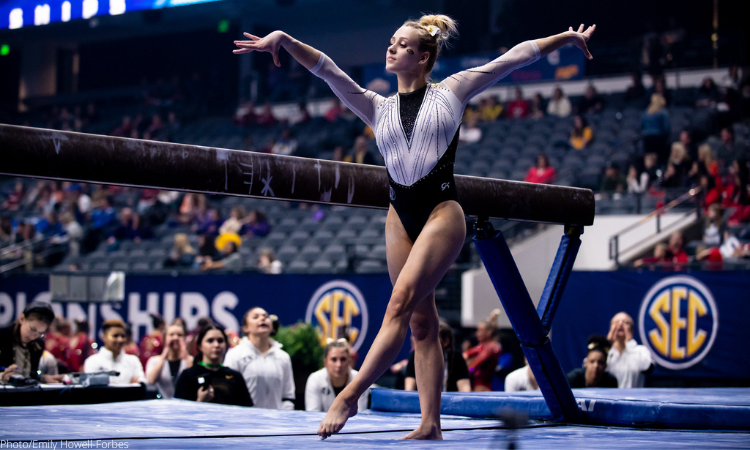 While recruiting gymnasts out of high school is certainly a key aspect of finding success as a college gymnastics team, transfers can also play a huge role. Transfers are currently a hot topic due to several high-profile names rumored to be in the transfer portal this offseason. Let’s take a look at past transfers and how impactful they were for their new teams.

We compiled a list of transfers dating back to 2011 because that was as far back as we had reliable transfer records. Athletes on each team were assigned a ranking (1-6) on each event based on their final NQS (or RQS) each season. If they had the highest event NQS on their team they received 6 points; if they had the second highest event NQS on their team, they received 5 points; and so on. If an athlete did not compete enough to receive an NQS or had an event NQS that ranked outside of the top 6 for their team, the athlete received 0 points on that event. Data was adjusted for gymnasts who sat out their first transfer season due to transfer rules. We then determined first year impact by summing the points each athlete earned in their first season (or second season for those that were required to sit out). We also summed the amount of points each athlete earned throughout their career at their new university. We then divided this sum by the number of seasons the athlete was eligible to compete to calculate their total average impact per season.

The most obvious name here is Addy De Jesus, with a perfect 24 points in her first season at Iowa State. This means that she had the top NQS on every event compared to her teammates, and the Cyclones’ scoring potential would’ve been significantly lower without her presence on the team. It’s interesting to see that both Temple and Pittsburgh have three transfers on this list, meaning that they’ve utilized the transfer portal well over the last decade.

Rachel Zabawa transferred to Lindenwood as part of its inaugural team after redshirting her freshman season at Nebraska, and her total here shows just how important she was to the Lions’ first four years as a program. She was a consistent competitor on three events, placing in the top two by NQS every year she was on the team. Two active gymnasts, Julianna Roland and Alisa Sheremeta, will have a chance to move further up this list when they return for their COVID years in 2023.

When averaging the impact by number of seasons with the team, two San Jose State gymnasts come out on top in Maddie Herr and Bekah Gher. They both stayed with the Spartans for their final two seasons after transferring from Ohio State and Boise State, respectively.

As always, there are some caveats with this analysis. First, season-ending injuries were not taken into account when averaging total impact by number of seasons; if injury-riddled seasons were removed from the calculation, several gymnasts would have placed higher on the third list. Second, fewer gymnasts achieved an NQS during the COVID-shortened 2020 season, and this was not accounted for in the numbers. Similarly, NQS was calculated differently in the 2021 season than the other years in this analysis, but since we only used the gymnast’s ranking among teammates’ NQS, the impact of this should be very low.

This analysis favors all-arounders and multi-events over specialists, so there is potential to do further analysis focused solely on specialists who had a large impact as transfers. Similarly, another study could be done to compare transfer performance on a gymnast’s original team to performance on the transfer team.