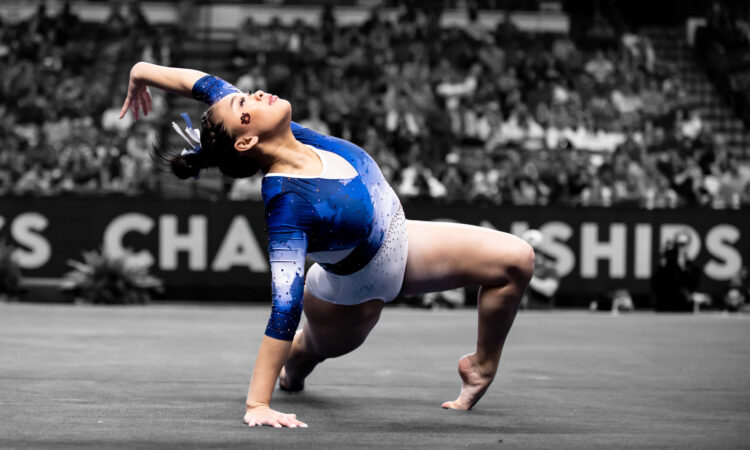 College Gym News is proud to announce its second annual end-of-season award recipients. Members of the CGN staff nominated individuals in six categories based on specified criteria. Then, the field was narrowed down and editors voted based on regular season performance only. Individuals cannot win more than one award. In the case that this does occur, the runner up in the secondary category is given the award. You can find the categories, winners and remaining nominees below.

Gymnast of the Year

Criteria: Nominees shouldn’t just top the standings but have been a significant contributor throughout the season for their team. Nominees rarely had missteps and consistently produced top scores that made an impact. They stand out from their peers.

Jade Carey had a remarkable year. She finished the season ranked No. 1 in the all-around and is in the top 10 on every event except beam, where she is No. T-11. Carey had only two scores below 9.900 all year and competed in the all-around in every meet of the season. She is behind only Trinity Thomas’ regular season all-around high with a 39.850. Carey had an unmatched year and will go down in the record books as arguably the most dominant freshman ever.

Freshman of the Year

Criteria: Nominees must be a true freshman during the 2022 season. They are gymnasts who not only consistently produced top scores but made an impact on their own team and stand out from their peers.

Sunisa Lee finished the 2022 regular season at No. 2 in the all-around, No. 1 on bars and No. T-1 on beam. Perhaps as impressive as her gymnastics, Lee has increased the profile of the sport everywhere she competes. Auburn’s Neville Arena has been repeatedly packed. The Tigers sold out meets, broke their season ticket record and saw a record numbers of students in the student section. Lee helped Auburn draw huge crowds at away meets, too, and habitually stayed late to sign autographs and meet with young fans. She also brought celebrities like Matt James and Charles Barkley into the fold. Lee’s balance of incredible gymnastics and helping bring new fans to NCAA gymnastics has already cemented her in the record books.

Coaching Staff of the Year

Criteria: Nominees first and foremost coached their team to athletic success, whether that means a large improvement over past seasons or record breaking performances.

The Spartans had an extraordinary season, breaking nearly every record in the books including their best-ever finish at No. 9, the first team out of nationals. Mike Rowe and his staff of Nicole Jones, Whitney Snowden and Alina Cartwright all contributed to the remarkable run: Cartwright choreographed the arguably best-in-the-NCAA floor routines while Jones coached the beam team to great success, including Skyla Schulte’s nationals qualification on the event.

Breakout Performer of the Year

Criteria: Nominees are sophomores, juniors or seniors who were particularly successful in 2022 after not having competed, having only competed one or two events or having only received mediocre scores to start their careers. Nominees “came out of nowhere” on events they weren’t expected to contribute, started getting scores much higher than previous averages or finally added events you didn’t know they were even training.

Jada Mazury has always been a steady performer for San Jose State, but she came into her own in 2022; she competed in the all-around for the first time in her collegiate career and did so in every meet of the season. She finished the year ranked No. T-29 in the all-around and with two NQSs —bars and floor—above 9.900. Mazury advanced as an individual in the all-around to regionals and led her team to the play-in meet. She is the reigning MPSF bars, floor and all-around champion.

Comeback Gymnast of the Year

Criteria: Nominees missed at least the majority of the 2021 season and didn’t just start competing again in 2022, but did so well, producing effective scores for their teams.

This season saw a number of gymnasts return to great success after missing one (or several!) seasons, a truly remarkable feat. Norah Flatley stood out in particular, with an all-around high of 39.700 and a 9.975 on floor. Flatley competed all four in nearly every meet for the Bruins with only two misses on the year. She also set an incredible example, choosing to acknowledge that mental health is health and competing only vault and bars in the regional final. Flatley missed almost all of the 2021 season, competing only in the conference and regional meets.

Sports Information Director of the Year

Criteria: Nominees are individuals who can be described as responsive, attentive to the media’s needs, maintains the team website (is always timely when adding coverage links) and even goes above and beyond their job description when setting up interviews or providing necessary information, for example.

As a media organization, we work closely with teams and sports information directors to do our jobs. And while, appropriately, most of the focus during the season is on the teams and gymnasts, we don’t want the hard work these individuals do behind the scenes to go unnoticed. Keller was truly exceptional the last two seasons, going above and beyond to make sure that we had the information and support we needed to do our job well. She was attentive to detail, always quick to respond and ultimately worked very hard to make it easy for us to do what we do.

While Keller received the most votes from our editors, we wanted to highlight all of our nominees in this category because we feel like SIDs are the true unsung heroes of collegiate athletics. Whether it’s going the extra mile to set up interviews, emailing frequently with updates (or to say there still isn’t one) or making it possible for us to cover meets in person safely during the pandemic, we appreciate all the SIDs have done this year to keep college gymnastics running. Hear from our editors about some of the other nominees below.

“I chose Stubblefield because he was always responsive and kind when I reached out to him for media inquiries.”

“Berrio is always attentive to the media’s needs, facilitating interviews to help us meet deadlines wherever possible. He’s also been an integral part of LSU’s push to treat coverage of the gymnastics team like other mainstream sports.”

“White was very helpful during the process of writing my future, from responding in a timely manner to texting me to make communications speedier and keeping me up to date when the team’s schedule changed at the last minute.”

“As a first year editor, Geer made everything so easy for me from my first email introducing myself to covering the GEC championship in person. He replied to each and every email quickly and with all the information I could hope and dream of.”

“Heaps is an active member of the gymternet and engages herself in ways to better promote Stanford gymnastics and the sport as a whole. Plus, Stanford switched to a real live scoring system this season.”

“Berrio has been so helpful all year, including on some very delicate topics. He’s responsive, efficient and kind. Can’t ask for much else!”

“Although I corresponded with Keller just a few times, she responded very quickly to my requests each time with the utmost professionalism in her emails and made it clear that Minnesota gymnastics is important. That attitude is a crucial step in uniting all members of the gymnastics community to transform gymnastics into a more widely-covered and respected sport.”

“Willard is always responsive and knowledgeable, even offering to help with questions and issues that aren’t her responsibility.”

“McIntosh is always responsive, quick and well-organized. She is also very knowledgeable and ready to answer any questions about the Michigan program and its history beyond the call of duty.”