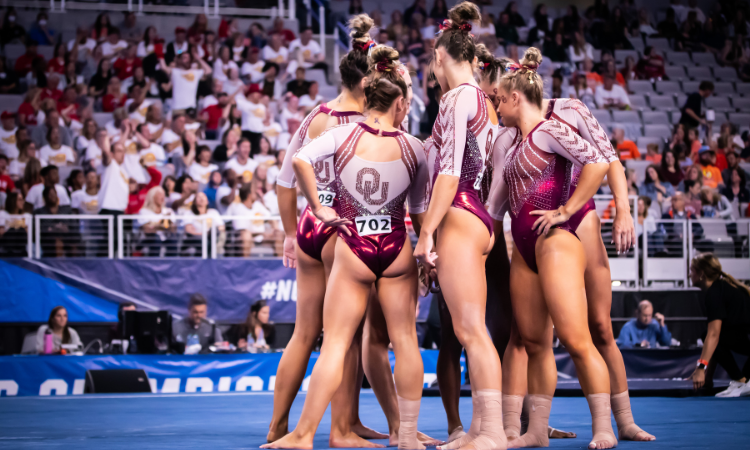 While the official rankings are a great indicator of how a team is scoring, they don’t always tell the full story of how a team is actually doing. Overscoring, injuries, upgrades and downgrades are all things a score can’t necessarily tell you about, so I will. In my biweekly Report Card, I will grade our top teams on each event while giving feedback on what’s working well and what needs to improve to make the Honor Roll – where you want to be to truly contend for an NCAA championship.

With NCAA championships, also defacto final exams, now behind us, it’s time to take a look at how each of our honor roll teams fared with the season’s biggest test. Ultimately, just the national-champion Sooners ended with straight As, making it clear where the rest of the contenders left tenths on the table and fell behind. Grading this week reflects each program’s event averages (or semifinal totals) from championships, with a 49.600 or better earning an “A+” and decreasing with every tenth the average does and is accompanied by some closing remarks on their season.

Final Remarks: The top team at the end of the regular season maintained their status throughout the postseason with the Sooners crowned as the 2022 national champions. Albeit one of the most consistent teams this year, Oklahoma used peak performances on vault and bars in the final to make the difference and ultimately cement itself as the dominating dynasty of the last decade of collegiate gymnastics. Arguably most impressively, a majority of its championship lineups were comprised of underclassmen, so continue to get comfortable with Oklahoma and No. 1 being synonymous.

Final Remarks: Although most are hoping for a bonus season from her, ending the Trinity Thomas era at Florida with three individual titles and a runner-up team finish was a remarkable one. The Gators’ finishing floor rotation gave us an exciting season finale that came down to the final score, but when comparing grades it’s obvious where the door was left open for the Sooners to snag the title. Anything short of a championship with the potential this roster had is certainly a slight disappointment, yet Florida is once again reloading with talent that will surely have it in a similar (or better) position come next April.

Final Remarks: The perennial gymnastics powerhouse once again fulfilled its prophecy having still competed in every NCAA gymnastics championship, but the Utes also once again fell short of the title that has continued to evade them for over two decades. Beam and floor looked the part of a champion, but vault and bars troubles from the regular season trickled over to NCAAs to lead Utah to a repeat third-place finish. Promisingly, the core of the Utes’ lineups are returning to give them yet another shot at vying for their elusive 10th NCAA title.

Final Remarks: The new belle of the ball made the most of its trip to Fort Worth, earning an upset in the semifinals to be one of the last teams to compete in 2022 and earn a program-best fourth place finish. Adding an Olympic champion to the roster was a key factor in Auburn’s success this season, but additional kudos is deserved by the rest of the roster for its ability to handle the added publicity of Sunisa Lee and elevating the level of its gymnastics to compliment hers. If the Tigers can continue to do this moving forward, they should continue to find themselves finishing amongst the powerhouses of the sport.

Final Remarks: A remarkably consistent season for the Tigers culminated in a program-best fifth place showing at nationals and a pair of runner-up event finishes, an incredible feat for a team nobody would’ve picked to be at nationals in the preseason. While Missouri may not have had the jaw-dropping routines and scoring potential of other top teams, not counting a fall the entire season proved to be an ultra-effective strategy in both the regular season and NCAA semifinals. Returning this entire roster now laden with championship experience bodes very well for the Tigers heading into 2023.

Final Remarks: Beam, the event that plagued it all season, was once again Minnesota’s demise in taking it out of contention in the first rotation of the national championships despite putting up three other competitive totals. While a sixth place showing is nothing to scoff at, it’s unfortunately a bit of a disappointment to finish the Lexy Ramler and Ona Loper era in Minneapolis. The Gophers’ ceiling for the next few seasons will be significantly lower unless a new superstar emerges to compliment Mya Hooten.

Final Remarks: Even with a few extra events from a previously injured Luisa Blanco, the Crimson Tide were just a bit flat throughout their semifinal and weren’t able to hone in on enough vault landings to keep up and advance to the final. It was Alabama’s lowest score since January for a team that had only been trending upwards since that point. However, depth should once again be an asset for the Crimson Tide next season, and with a highly touted recruiting class coming in it’s looking like they’ll have a shot at redemption in 2023.

Final Remarks: The Michigan meltdown while attempting to defend its championship was certainly unexpected, but missing the national final is unfortunately a common occurrence for the Wolverines who have done so every year in the past decade aside from their 2021 title run. The season-long questions about how Michigan would fare should more than one of its incredible all arounders have an off day were answered during its semifinal, and will now enter another season needing to dispel its repeated postseason miscues. With two incoming five-star recruits, it will be interesting to see what lineup strategies the Wolverines employ moving forward.